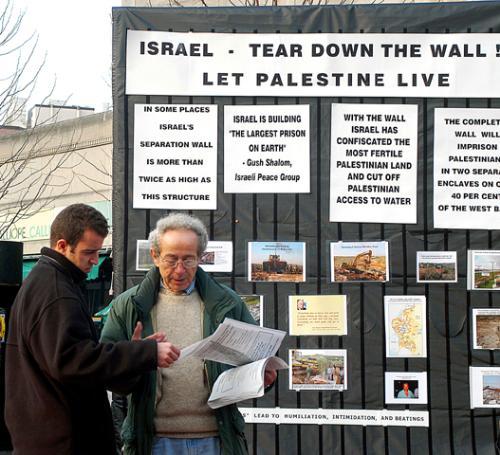 SHERIF FAN, right, a Cambridge resident and member of the group BostonToPalestine, protests Israels proposed security fence in the West Bank yesterday. The protest was unrelated to the appearance of prominent Israeli journalist Yossi Klein Halevi, wh
NO WRITER ATTRIBUTED

There is no hope of brokering peace in the Middle East in this generation because Palestinians are not ready to accept the legitimacy of a Jewish state, prominent Israeli journalist Yossi Klein Halevi told an audience of 70 at the Harvard Hillel last night.

Halevi said that Israelis who believed that Palestinians were entering peace negotiations in good faith were deceiving themselves.

Halevi said that the claim made by many Palestinians that Israeli settlements pose a major threat to peace is evidence that the Palestinians are not sincerely negotiating.

“Settlements were a terrible mistake, a serious miscalculation. They are not the reason there is no peace today,” he said. “At Camp David, they were not among the top five issues discussed. The political leadership has cynically used the settlements as a propaganda ploy to cover up the real reason why there is no peace.”

Halevi said that he was told in private conversation by ousted Palestinian General Nasser Yousef that Yousef legitimately wanted to crack down on Islamist terrorist groups and knew where they were located, but was prevented from taking action by Palestinian Authority President Yasser Arafat.

Halevi said that from his talks with Palestinians he has determined that “almost all Palestinians conceive of peace, if at all, as a long cease-fire and not as a recognition of the other side’s legitimacy.”

According to Halevi, even Yousef told him he thinks that the resolution of the conflict will be a one-state solution, with Jews, Christians and Muslims living together in an Arab state—rather than a solution in which Israel is recognized as a sovereign state.

Halevi talked a good deal about what he called the self-delusion of Israelis during the peace talks—and said that he, too, harbored false hopes.

As far back as September 14, 1993, only days after the signing of the Oslo agreement, Halevi said, the Jerusalem Post ran a story saying Yasser Arafat had told a Jordanian television station that he only wanted to negotiate with Israel so that the Palestinians would gain land and thereby cause the weakening of Israel.

“Arafat saw Oslo as the beginning of a process that would lead to the unraveling of Israel’s viability,” he said.

But Halevi said he did not call the reporter who broke the story to ask about its truthfulness.

“I decided not to call him because I didn’t want to find out the truth,” Halevi said.

“What I did, you can multiply across the board not just for foreign media, but for Israeli media, as well,” he added. “We as a profession failed because we didn’t want to burst the bubble. We hid the truth from ourselves.”

Halevi said that the right wing in Israel offered no viable alternative with its vision of colonizing Biblical Israel—a territorial goal that includes the settlements Halevi blasted last night.

But he said he blamed the left wing, with which he once identified himself, for convincing mainstream Israelis that peace was possible.

Halevi also said that some sort of resolution could be possible, but only in the distant future.

“There will not be an agreement to answer all Palestinian grievances—not in this generation,” he said. “Maybe once Arafat leaves we can have some interim agreements.”

He dismissed the claim by the fence’s opponents that it is “an apartheid wall—it is neither a wall nor apartheid.”

But he added that he did think that the wall would determine the future boundaries of Israel.

“My vision is a unilateral withdrawal of Israel to behind the fence so that the Palestinians can create what will almost surely be a failed state, and we’ll live with it as best we can,” he said.

Halevi also said that Israelis should no longer negotiate returning any part of Jerusalem to the Palestinians because of security concerns.

“Jerusalem will remain united because of this war,” he said. “That is the irony of this war and what I’d call the poetic justice of this war.”