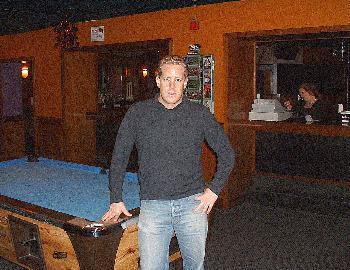 It’s Monday night at fair Harvard. Typically, the biggest weeknight soirees on campus are Ec 10 study sessions in the
By Jason D. Park

It’s Monday night at fair Harvard. Typically, the biggest weeknight soirees on campus are Ec 10 study sessions in the halls of Widener and Lamont. However, three days ago, roughly 500 Harvard students made the trek to a new promised land: Harvard State University (HSU). The party advertised the experience of college as it was meant to be: pulsing lights, pounding beats, short skirts and the requisite freaks and grinds. Three bars keep the libations flowing like water, lubricating the red and black fantasy world of Club Europa. “[HSU] shows that we do know how to have fun, even on a weekday,” partygoer Lisa M. Shichijo ’06 says.

The name most Harvard students associated with the bash was HarvardParties.com, which advertised the event in every dining hall and flooded thousands of inboxes with promotional e-mails. But all HarvardParties.com founder Zachary A. Corker ’04 had to do to get the party started was call the quintessential guy behind the guy: Steve Frumin. The owner of an “event management” company called Universal Promotions, Frumin has organized more than 1,000 Harvard social events, including House formals, punch events, reunion galas and club parties, since 1990. “We’re the Home Depot for parties, a one-stop shop... The challenge is to find something I haven’t done,” says Frumin, a clean-cut, powerfully-built man of medium height with short blond hair.

While Frumin also runs events in New York and Washington, D.C., he owns the Boston party scene like Bill Gates and runs it like P. Diddy. Before flying into Boston to keep tabs on HSU, he spent the weekend in L.A. with client David Smith (better known as Joe Millionaire) and ran a casting call with Jay Leno for the Discovery Channel’s reality spinoff of its popular “Crocodile Hunter” show, and he’s shuttling down to New York to run another casting call. “I can get you on ‘Fear Factor’ tomorrow,” he says over Subway sandwiches in Europa’s lounge room before the party. “[Producer] Mikey Glazer, he’s my boy.”

At Harvard, Frumin has been responsible for several House formals, the Seneca’s Red Party, the Wicked party and the Hasty Pudding Theatricals’ Woman of the Year. He says he runs a party every other night, serving a clientele that includes 40 Boston area colleges and several Fortune 500 companies, including IBM, Oracle, Reebok and Sprint PCS. In addition, among numerous entertainment-related engagements, he is currently handling promotions for MTV’s “Real World,” the Rolling Stones, the Boston Celtics and the New England Patriots. Dave, one of his assistants, says Frumin’s cell phone speed dial includes such notables as Britney Spears, Jason Mraz, Nick Carter, Ludacris and P. Diddy himself. Frumin knows how to charm a reporter: around 1 a.m. outside Europa, Frumin lets FM call Spears’ cell phone on his. She doesn’t pick up, and he says she gets so much voice mail that there’s no point in leaving a message.

Yet despite Frumin’s jet-setter image, his friends and clients (they tend to overlap) say he’s a reliable professional. “You run into a lot of scumbags in this business,” “Real World: Las Vegas” cast member Steven Hill says to FM on Frumin’s cell phone. “But Steve and his guys couldn’t be any more professional. They do things correctly and ethically. I haven’t always had such great experiences [with promoters] in the past.” Frank Roessler, Hill’s fellow Vegas cast member, expresses similar sentiments. “It’s so frustrating to work with [other promoters] and not know when you’re getting paid or when someone’s picking you up from the airport. I’ve had a great time with [Frumin]. It doesn’t feel like business with him.” His Harvard clients are equally impressed. “[Frumin] is great to work with,” says Corker. “He knows all the contact people in Boston. He knows all the kids and all the organizations at Harvard.”

Sporting a navy blue pullover and designer jeans, Frumin sits by a window at Europa before HSU, surveying the action as club staff prepare the venue and stock the bars. With no partygoers at the moment, the three adjacent rooms of the club Europa—dance floor, pool room and lounge—appear like hollow red caverns. As a club staff member walks by, Frumin stops him, asking, “When is this thing starting up?” “We don’t expect people until at least 10:30,” he replies. He nods. Several members of both the Europa team and the HarvardParties.com crew periodically defer to Frumin throughout this waiting period, seeking his expert advice.

After deciding to host HSU, Corker, who co-chairs Mather HoCo and knew Frumin from the House’s winter formal, met with him to discuss a venue, the projected number of guests and ideal dates. The rest was left to Universal, which formally hosts the party and assumes insurance responsibilities in lieu of the University. “[Clients] come up with the theme, we give the direction,” Frumin says. “They tell us if they want a DJ, a band, a coat check or transportation.” Once a venue is secured, Frumin then connects the host to specific ticket printers, bus companies and other pertinent vendors in his network, who give him discounts for buying their services in bulk. “The good thing about Steve is that everything is set in stone,” says Jesse L. Maki ’04, one of the organizers of Wicked.

Frumin’s work continues on to the night of a given event, when he and his staff serve as “baby-sitters” between a venue and party organizers, enforcing safety policies and covering for liability. “Clubs have a lot to lose. We have to say strict,” he says. Throughout the course of the night, several students are reluctantly removed from HSU for drinking without wristbands. “It’s a mistake!” one forcefully claims as he is led by burly bouncers down Europa’s steep staircase entrance and out the door. One bouncer replies, “You took a chance and you lost.” Frumin grins.

More than simply a liaison, however, Frumin manages roughly 30 different area venues and holds exclusive management rights over Roxy, Matrix, Aria, Venu and Veronique, among others. “Basically, any event that happens at [one of those properties] has to come through us,” he says. On the same Monday night as HSU, Frumin has two other events in the vicinity—a concert by progressive rappers Atmosphere at the Roxy and a Jimmy Fund benefit, hosted by Tufts’ Theta Delta Chi fraternity, at the neighboring Matrix. Around 11:30 p.m., Frumin leaves HSU to meet briefly with managers at the Roxy. He confidently strides past lines and velvet ropes, receiving greetings from venue workers. An elegant juxtaposition of Greek-inspired decor and modern tribal designs, the Roxy comfortably hosts 1,400 fashionably urban concertgoers in its expansive floor and extensive balconies. Atmosphere’s punchy beats have the audience’s hands moving in unison. An ecstatic concertgoer in a Newport t-shirt and a grey vest confides, “Atmosphere is hot.”

Before heading back to HSU, Frumin takes a quick peek at the Matrix event, for which he has donated the use of the facility for the night and arranged complimentary bus transportation. The Tufts party is “just warming up” as a small, brightly-dressed crowd trickles slowly into the Jetsonian dance area, immersed in the ambience of DMX’s “Party Up.” Leaving the Matrix, Frumin notices yet another underage patron, this one dressed in a fishnet top and tight black pants, in trouble with a bouncer. “I’m telling the truth,” she pleads. “My boyfriend took my backup [ID] inside.” The bouncer threatens to call the police, and she backs down.

Despite his effectiveness, some argue that Frumin’s ubiquity in the community results in a homogenization of Harvard’s off-campus party scene. “Because he gets a certain deal with clubs, everyone ends up having the same formal,” Pfoho HoCo Vice President Kerry K. Shaughnessy ’05 says. She believes that planning Pfoho events without Frumin’s involvement gives her more control and allows her to choose the right venues without being “swayed by deals.” However, she adds, “It would have been much less stress and work on my part to go through someone. I could have just said ‘here’s what we want’ and written a check.”

According to Frumin, his service comes “free of charge” for college students. Student party organizers pay a rental fee to the owners of the venues where they hold their parties. These fees generally fall within the range of $2,000-$3,000, but can go as high as $15,000, depending on the date of the event and venue availability. Venue owners, in turn, pay Frumin a flat management fee. “There are 5,000 Boston college organizations all vying for the same clubs on any given night,” Frumin says, regarding the disparate range of price tags. Venue rental is generally the most competitive on Friday and Saturday nights.

Yet while Frumin’s fees are paid by the venues, most Harvard parties he runs don’t make money. “Ninety percent of the students I deal with do not turn a profit,” Frumin says. “Most choose not to. They charge a minimal amount.” Generally, a group will charge a base price for admission, which Frumin says fluctuates constantly depending on the venue, the night and the event, and sell well in excess of the break even point, which generally hovers around 100 to 200 people. But any surplus is generally plowed back into the party itself for amenities like food and drinks, Frumin says. He describes losing money from his parties as “very difficult,” and is unable to recall any significant incidences of a party losing money.

However, he emphasizes that profiting is certainly an option and that he has facilitated numerous successful fundraising events. Every year, Frumin hosts the Falafel Ball, an area-wide club event that benefits Israel in Crisis. Corker describes Frumin’s signature warmth as a major selling point. “[Frumin] cares a great deal about his job and about the people he deals with. Everyone [at Harvard] that he works with loves him.”

Frumin stakes his image on having seen it all, but back at HSU, one guest throws him a curveball: she’s accompanied by her mother. “The mother was in town and wanted to see what her daughter does for fun,” he explains. “That’s the first time I’ve ever seen that.”

And even the behind-the-scenes MC himself can’t answer every question. He recalls handling Sarah Jessica Parker at the Pudding’s 2002 Woman of the Year celebration. “She came in and handed me her coat. I put her coat up. The minute I turn around, all these women rush me and want to know what the label on her coat is. I’m a guy, I don’t know these things.”