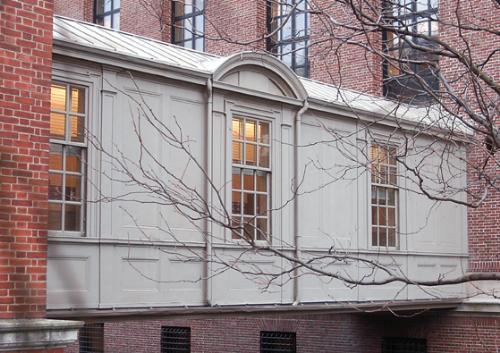 The second-story bridge between Widener and Houghton libraries, which dates from 1941, will be torn down next year.
By Zachary M. Seward, Contributing Writer

The covered bridge connecting Widener and Houghton Libraries, whose peculiar history has long peppered Harvard tours with quirky anecdotes, will be demolished this spring, library officials have announced.

The bridge, which has been closed to the public since March 2002, will meet its demise after 60 years of precariously allowing staff and patrons to shuttle between the libraries through a window in the stacks of Widener.

“There was not a logical way to plan for egress, and at the same time to take care of the security of the two buildings,” Cline said, adding, however, that the bridge remains structurally sound.

According to William P. Stoneman, Houghton’s head librarian, saving the bridge was not economically viable.

“It’s safe to say that if you wanted to put a great deal of money into [the bridge], you could have made it work,” Stoneman said.

Although the bridge had become increasingly obsolete in recent years, the structure remained aloft as harried students and gawking tour groups continued to pass underneath.

Under the conditions of a 1912 agreement between the University and Eleanor Elkins Widener, the library’s benefactor, no “additions or alterations” could be made to the facade of the building.

As such, when Widener was connected to Houghton in 1942, the bridge had to be constructed through a preexisting window, forming one of Harvard’s most unusual architectural structures.

“It’s definitely one of the stories that garners the most laughs,” said Doris C. Huang ’06, who guides tourists through Harvard for the Crimson Key Society.

Huang, who challenges her tourists to be “as creative as the Harvard architects and think of a loophole” in Mrs. Widener’s stipulation, lamented the forthcoming loss of one of her favorite anecdotes.

Before its closure last year, the bridge allowed patrons of Houghton who used the library’s rare book and manuscript collection to move easily into Widener’s more general offerings. Patrons and staff could access the two-way bridge through a buzzer system.

But use of the bridge had waned recently as the library system’s online offerings increased, according to Stoneman.

“A lot of things that people had to go to Widener for, they now do electronically,” Stoneman said.

Still, Stoneman and Cline agreed that the bridge’s demise represents a significant loss for the two libraries, if only for their staff.

“It’s always been a...much appreciated connection for the staff,” Cline said, noting that the structure provided a protected thoroughfare during the Cambridge winters.

Mrs. Widener’s gift, which historians have estimated at over $4 million, provided the funds to build the Harry Elkins Widener Memorial Library.

The library was named after her son, a member of the Class of 1907, who bequeathed his prized book collection the University following his death on the Titanic.

Harry Widener’s father also perished in the 1912 disaster, but his mother, Eleanor Widener, survived on a lifeboat and went on to endow what would become Harvard’s premiere library.

Mrs. Widener’s altruism, however, came with a few peculiar conditions, including a provision permitting her “to do grading and landscape work” on the grounds of the new library.

But the clause forbidding “additions or alterations” to the exterior has proved the most troublesome for Harvard architects and lawyers, and the Solomonic compromise which gave birth to the now doomed bridge between Widener and Houghton has stood in University lore for decades.