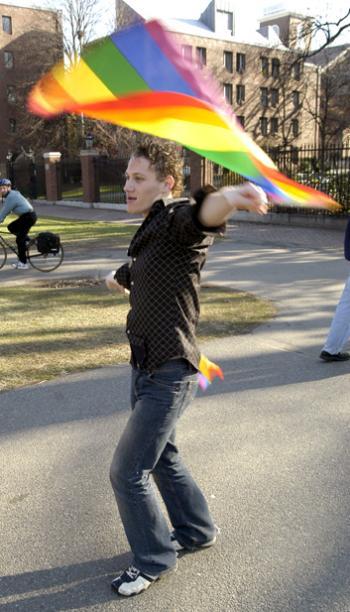 In a 4-3 decision, the state’s highest court decided that the Massachusetts constitution “forbids the creation of second-class citizens” and that the state must allow homosexual couples to marry.

Following the announcement, members of the Harvard Bisexual, Gay, Lesbian, Transgender and Supporters Alliance (BGLTSA) staged an impromptu celebration in front of the Science Center.

“I’ve had lots of calls from students and faculty saying, ‘This is a great historic day,’” said the Rev. Dorothy A. Austin, who is co-master of Lowell House along with her partner, Professor of Comparative Religion Diana L. Eck.

“It’s certainly something I looked forward to seeing during my lifetime,” Austin said, adding that she “would love to be able to marry.”

Though he was unsure of the details of the ruling, Professor of Romance Languages and Literature Bradley S. Epps said he and his partner would marry if it indeed becomes possible.

Massachusetts Gov. Mitt W. Romney said yesterday he was in favor of an amendment to the state constitution defining marriage as a heterosexual institution. But no such amendment could be enacted until at least 2006, and today’s decision in the case, Goodridge v. Department of Public Health, takes effect in 179 days.

Mark T. Silvestri ’05, spokesperson for the Harvard Republican Club, said he agreed with Romney and other social conservatives in their opposition to the court’s definition of marriage as “the voluntary union of two persons as spouses, to the exclusion of all others.”

“We stand with President Bush... on this issue, that marriage is between a man and a woman,” Silvestri said.

Bush is considering supporting an amendment to the U.S. Constitution that would limit marriage to heterosexual couples.

“The Bush administration is a messianic Christian administration,” Epps said. “I think that raises a number of difficulties for people who don’t share that messianic view.”

Epps added that public acceptance of gay marriage will not come easily.

“It takes a long time for some people to give up a monopoly on love and to think that loves matters only for a select few,” Epps said. “Prejudice dies hard.”

BGLTSA public relations chair Adam P. Schneider ’07 agreed that yesterday’s decision was important but that much remained to be done.

“We think that providing equal access to the institution [of marriage] is a step in the right direction, but obviously we’re more interested in creating awareness of BGLT issues,” Schneider said.

Not only did the ruling affect members of the Harvard community, but several of the main players in the case were also connected to Harvard.

Five of the seven justices are Harvard alums, and Chief Justice Margaret H. Marshall was the University’s general counsel before being appointed to the court.

Hillary Goodridge was especially pleased that today’s ruling seems to prevent the legislature from substituting civil unions for legal marriage.

“I don’t think it would do me a lot of good if I was travelling in Nebraska and said, ‘This is my civil partner,’” she said. “What is that?”

Robert D. Compton, a lecturer at the Dental School, was another plaintiff in today’s case. He said that he and his partner, David L. Wilson, were denied a marriage license in March of 2001.

“They were very polite, very nice, but said I needed to have a bride with me,” Compton said.

“We were looking for a civil relationship and recognition by society,” Compton said.

And Compton said that gay relationships and marriages will gradually achieve this recognition.

“When people see that these things do happen and the earth doesn’t come to a standstill and God doesn’t send lightning bolts down to earth, people get over it,” he said.

—Associated Press material was used in the reporting of this story.