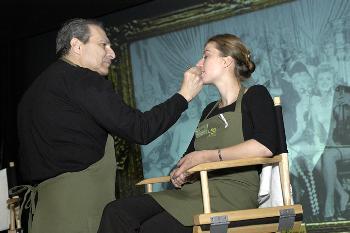 Gentlemen Prefer To Be Blondes

Just for tonight, Stacy, born Scott Campbell, is onstage with Hollywood’s greatest. There’s Tony Curtis, Jack Lemmon ’47 is close by, and of course, there’s Marilyn. Sure, they may just be DVD projections on the screen behind the stage at the Brattle Theater. But what matters now is the old-school Hollywood glamour that the Origins makeup representatives are transmitting through brushes and blushes, through powders and poufs, at Tuesday’s “Get Made Up with Marilyn” event.

Followed by a screening of Monroe’s hit How to Marry a Millionaire, the program was third in a makeup-and-movie collaboration series with Origins that has included a sold-out screening of Breakfast at Tiffany’s and slightly less successful Grace Kelly event.

Grinning under her curly blonde wig, Campbell, 45, says that this is her first makeover. She’s an expert on classic films who calls Monroe “an inspiration.” In fact, Campbell says, the first time she ever cross-dressed was at the Brattle’s “Transgender Tuesday” event in 1997, where gender-bending was rewarded with a half-price ticket.

Her roommate Kathleen Frey, a transitioning transsexual who met Campbell through the Tiffany Club, a Waltham-based social group focusing on transgender issues, says she’s had dozens of makeovers. “I’m getting pretty good at makeup,” she says, “but I just want to learn as much as possible.”

An aspiring writer who says she’s in her thirties, Frey confesses that she’s looking for a role model in Monroe. “Most of my role models have been other transsexuals,” she says, “so it would be good to look up to a genetic female like Marilyn.”

The genetic females in the crowd seem equally in tune with Monroe’s iconic status. “She’s a larger than life figure who’s very tragic,” says Dawn Kipphut, a Cambridge movie buff who works in customer service. “I mean, she died alone. And she had to change a lot about herself to become the icon.”

The two Origins reps onstage are Hungarian chemist Krisztina Meiszel, 29, whose husband is an astrophysics graduate student at Harvard, and Mitchell Geller, a dapper man in his early 50s who’s equally at home with wielding a mascara wand and talking feminist theory.

“I’ve never had patience with the feminist casting of Marilyn as only a victim,” says Geller, who says he’s seen just about all her films. “She was a tremendously ambitious person who helped create her own myth.”

When it comes to that myth—and that makeup—there are two Marilyns, says Geller: the 1940s Hollywood, dark-eyed and red-lipped vamp, and the “white on white” look crafted by makeup artist George Masters in the 60s. “He transformed her from Technicolor to frosted way before that became the fashion,” Geller says authoritatively. “She was the prototype, spanning the two types of 60s blondes—from vamp to vulnerable.”

To that end, Geller and Meiszel have brought two Origins eyeshadow sets, one for each look: “Gilty [sic] Pleasures” and the more neutral “Partial Nudity.” The two agree that participants tonight have overwhelmingly chosen the vamp look for their makeover.

Geller came to retail cosmetics thirty years ago from a job teaching English, during which he’s managed to make up feminist foremother Betty Friedan twice, while she was on a Radcliffe fellowship.

“She said, ‘young man’—I was a young man then, not yet working at Origins—‘make me over. I’m a Dior girl,’” he recalls. “I was sitting there thinking, what am I going to do with her eyes? She’s an uncommonly plain woman, you know, but so engaging that you forget.”

“And she said, ‘I know what you’re thinking. Why is she bothering, she’s so homely. I have no illusions. I know what I look like. But I like men, and I’ve always tried to look my best.’”

By contrast, Geller describes his older Cambridge clients at Origins as being often ambivalent about makeup. “Part of it’s Puritanism, and part of it is that they think looking one’s best is a violation of their politics,” he speculates. “But I was drawn to makeup because people use it to both flaunt themselves and to hide behind. I consider it a viable form of self-expression.”

Back in the audience before the film starts, there’s a debate whether a post-makeover Campbell, who works the overnight shift at a chain hotel in Newton, can wear her current outfit of pink crushed-velvet turtleneck and black miniskirt to work tonight. “My manager is okay with my cross-dressing, but I’d probably have to wear a regulation white blouse,” Campbell reflects.

Asked their thoughts on Origins makeup, Frey and Campbell consider their preferences. “We’re bargain basement trainees,” says Frey. “Cover girl and all that. But there’s an Avon lady at the Tiffany Club who hooks us up.”