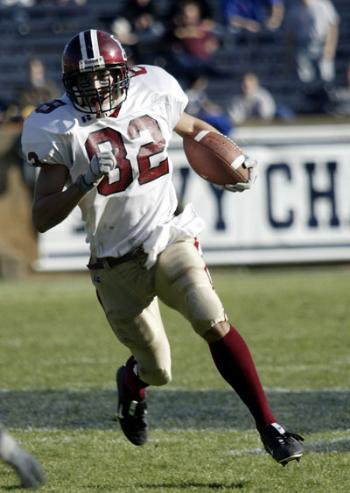 NEW HAVEN, Conn.—It’s the power of The Game.

The Harvard football team rolled into New Haven this year with everything going wrong. The offense lacked the explosiveness that led the Crimson (7-3, 4-3 Ivy) to a 6-0 start. Quarterback Ryan Fitzpatrick had practiced three-and-a-half times in the last five weeks and his receiving corps appeared to be decimated. The defense that had been so clutch in the first six contests couldn’t buy a turnover. Not surprisingly, Harvard headed into the season finale against Yale (6-4, 4-3) reeling—losers of three in a row.

But nothing cures a seemingly disappointing season like a 37-19 thrashing of poor Eli in front of 53,136 at the Yale Bowl.

Fitzpatrick and the offense resembled the team that averaged over 500 yards-per-game for much of the season rather than the team that could barely muster anything against Columbia two weeks ago. And the defensive secondary, which had struggled in recent weeks to contain taller, stronger receivers, made big plays when they were needed and kept the Bulldog offense out of the endzone.

Yale moved the ball well between the 20-yard lines, with quarterback Alvin Cowan turning in a record-setting day with 438 passing yards—the most in Bulldog history.

But as Yale got deep into Harvard territory, its drives stalled. In six opportunities in the red zone, the Bulldogs managed only two touchdowns.

“We had 500 and something yards of offense,” said wide receiver Ralph Plumb, who contributed 15 catches and 158 yards to that total. “And how many points did we score? 19? That’s laughable. That’s awful.”

After the Bulldogs failed to move the ball effectively on their first three plays, they then took a timeout and opted to go for a touchdown rather than taking a field goal, thereby reducing Harvard’s lead to eight. Yale returned to the field with 6’7 tight end Nate Lawrie split wide left, paired with 5’8 senior cornerback Benny Butler.

Cowan recognized the mismatch immediately and launched a high-arching pass deep into the back left corner of the end zone. But Butler’s coverage was perfect and he knocked the ball away from Lawrie before the tight end had a chance to make the play.

“That was a huge point in the game,” said captain linebacker Dante Balestracci. “To withstand that like we did…that just turned the momentum right around in our favor and we were able to roll on that.”

On the ensuing drive the Crimson took advantage of the big defensive stop and gave itself breathing room. On a third-and-four from the 21-yard line, Harvard coach Tim Murphy called an underneath route for his receivers in order to pick up the first down. Luckily for the Crimson, junior wide receiver Brian Edwards made a mistake.

“In all honesty, Brian ran the wrong route on that one,” Fitzpatrick said. “He was supposed to run a five-yard hitch.”

Despite the confusion, Fitzpatrick hit Edwards in stride deep down the left sideline as defender James Beck fell down and Edwards went untouched into the end zone, giving the Crimson a 31-13 lead.

Junior cornerback Gary Sonkur provided further insurance for Harvard late in the fourth quarter when he stepped in front of Cowan’s pass to receiver Ron Beningo and returned the interception 37 yards for a touchdown.

Up until the big pass to Edwards and Sonkur’s clinching interception, Yale had played just well enough to still be dangerous. The Bulldogs took the opening kickoff and drove down the length of the field only to have kicker John Troost push a 34-yard field-goal attempt wide left.

After Harvard drove down the field and Jim Morocco converted a 30-yard field goal, Yale responded with another impressive drive. This time the march downfield stalled on the Crimson 12, and Troost nailed a 29-yard field goal through the uprights.

In the second quarter, freshman running back Clifton Dawson began asserting himself. Dawson—who would run for 174 yards on the day—ran the ball four times in the opening drive of the second frame, moving the ball steadily.

But on a fourth-and-three from its own 49-yard line, the Crimson turned to trickery to keep the drive going. Out of a punt formation, the ball was snapped directly to Balestracci, who rumbled forward for eight yards and a first down.

After a reverse to Edwards and two more runs by Dawson, Fitzpatrick was in position to connect on his first of four touchdown tosses for the day. From the Yale 26, freshman receiver Corey Mazza beat his man down the left sideline and Fitzpatrick hit him in stride to give Harvard the lead for good.

“He was playing on one-and-a-half legs,” Murphy said of his beat-up signal caller. “It was just a tremendous and gutsy performance by him.”

Yale would respond with another field goal, cutting the lead to 10-6. But the combination of Fitzpatrick and Dawson proved too powerful for the Bulldogs.

Fitzpatrick connected on two more touchdowns on the afternoon. Late in the second quarter, he hooked up with junior Rodney Byrnes on a 10-yard bullet, threading the ball between two Yale defenders and putting Harvard up 17-6 at the half.

In the opening drive of the second half, Dawson once again carried the offense into Bulldog territory.

Then, from the 11-yard line, Fitzpatrick found backup sophomore tight end Kelly Widman all alone in the flat. Widman then turned upfield and dove just inside the right pylon for a touchdown.

While the Bulldogs scored a touchdown to cut the lead to 24-13, Butler’s big play and Edwards’ “wrong” route sealed the contest.

For the first time in a while, the sun seemed to shine on the Crimson.

“After all the adversity we’ve had the last month or so, it’s tremendous to see the way that our kids responded today, especially our senior class,” Murphy said. “It was a very intense, emotional and physical performance and, needless to say, we’re proud of them.”