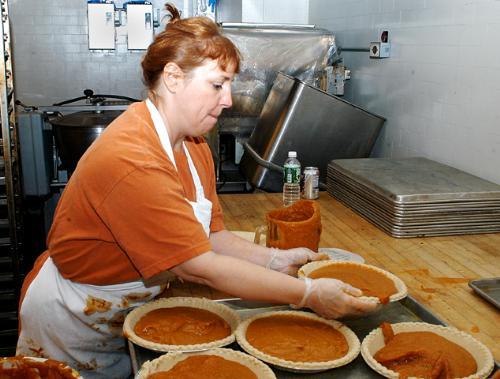 The air of the Eliot House kitchen was filled with the sweet smell of pumpkin pie throughout the weekend as 48 gallons of evaporated milk, 1,280 eggs, 560 pounds of brown sugar, 1,056 pounds of pumpkin puree and over 20 cups of cinnamon, ginger, nutmeg and cloves swirled in the industrial sized mixers Friday through Sunday.

The massive baking endeavor was the work of volunteers who came together to help Harvard University Dining Services (HUDS) participate in the annual Pie in the Sky fundraiser, a bake-off to benefit Community Servings, a non-profit that delivers food to people with AIDS who cannot leave their homes.

For the past nine years, HUDS has joined over 150 other Boston area restaurants, hotels, bakeries and universities in baking approximately 13,000 pies that are sold and distributed all over eastern Massachusetts.

This year, with the help of about 60 volunteers from the University, HUDS baked 1,750 pies—1,000 pumpkin and 750 pecan—making it the second largest contributor to the bake-a-thon.

“Harvard has been extremely good to us for years,” said Community Servings Executive Director David Waters, who added that other universities such as MIT and Northeastern contribute to the fundraiser, but not on the same scale as Harvard.

While volunteers from the President’s office have joined HUDS in the past, this year the bulk of volunteers accompanying four of HUDS’ executive chefs were from HUDS and the Bridge to Learning program, which allows Harvard employees to take classes.

“I think it’s amazing that they can make so many pies and for such a good reason,” said Katie O’Donnell, a catering operations manager who spent Friday afternoon scooping pumpkin pie filling into pre-made crusts.

The baking began on Friday afternoon as volunteers filled 40 gallon steel mixers to the brim with pumpkin pie filling.

“Learning to operate the machinery is really an art,” said Andy Allen, executive chef of the culinary support group, who supervised as volunteers poured the gloppy orange filling into 10 gallon white buckets.

Volunteers then scooped the filling into individual pie crusts and put the pies on racks to bake in the oven in batches of 125.

“We’re baking all pumpkin today and tomorrow,” Allen said on Friday, “and on Sunday we’ll make the pecan.”

With the burden of preparing a tailgate barbecue on Yale’s dining services this weekend, Allen said that HUDS was experimenting with spreading the baking out over the whole weekend—and even looking to increase their output in the future.

“We’ll see if this works better and we can increase the number of pies next year,” he said.

After the pies were baked and cooled, the volunteers sorted them into boxes and sent to them to the Boston Park Plaza hotel, where the pies joined legions of apple, pecan, pumpkin and sweet potato pies from other area businesses.

The pies will be distributed tomorrow to over 80 locations for pick up by customers who ordered pies ahead of time.

Customers get to pick the flavor of their pies, but not the maker—taking the chance that their $20 pie will come from Harvard and not other, more gourmet Cambridge establishments like Henrietta’s Table, Finale and Harvest.

Every $20 pie sold raises enough money to feed the equivalent of a meal to a family of four, according to Waters.

The Pie in the Sky program also features special celebrity pies, that for $100 come with signed memorabilia from the likes of Nomar Garciaparra, Eminem and Sheryl Crow.

“Nobody would pay $100 for one of our pies,” joked Director of Residential Dining Rosemarie McGahey, who has been volunteering in the baking for the past 5 years. “But it’s a great program and we’re glad to be a part of it every year.”