In spite of Cowan’s heroics, Yale can’t get by stingy Crimson defense 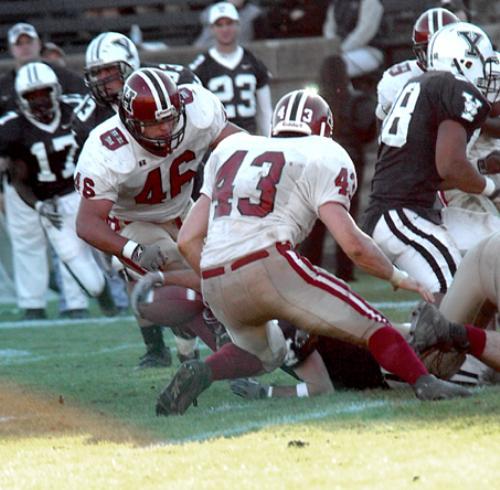 Junior linebacker BOBBY EVERETT (43) and senior running back COLLIN BLACKBURN (46) were among Harvard’s stingy defenders.
By Alex Mcphillips, Special to the Crimson

34-64, 438. Those are the final stats on Yale quarterback Alvin Cowan, in completions, attempts and passing yards. That last figure is a new Bulldog record. So is 466, representing Cowan’s total offensive yardage on the day.

158, 132, 94, 91. Those are the yards amassed by each of Yale’s top four receivers—Ralph Plumb, Nate Lawrie, Ron Benigno and Chandler Henley.

32:46. That was Yale’s time of possession during The Game. The Bulldogs held the ball more than five minutes longer than Harvard did.

Nevertheless, despite Yale's offensive numbers blowout, it was the Crimson defense that ultimately keyed victory in The Game.

All day long, the Crimson blitz had Cowan—the Ivy League’s top-rated passer—scrambling backwards and sideways, going to extremes to get rid of the ball. And although Cowan was sacked only twice, he was hit—and hit hard—by captain linebacker Dante Balestracci and junior linebacker Bobby Everett on several occasions and hurried on countless others.

Cowan said he did not think he had been pressured that much all year.

“[Harvard] [leads] the league in sacks for a reason,” Cowan said.

But even if Cowan was forced to struggle all game to avoid ending up on a stretcher, he still performed well under the pressure, leading Division I-AA’s second-best offense down the field.

So what was Yale’s problem? How did the Bulldogs end up with 19 points, their lowest total of the entire season—a number Plumb called “laughable”?

So stingy that, in six tries within the Crimson 20-yard line, Yale scored only one touchdown and kicked two field goals.

So stingy that the same team that scored three fourth-quarter touchdowns to overcome a 24-3 deficit against Penn at one point this season could not muster that many scores against Harvard in the entire game yesterday.

“We made the big stop, and all of a sudden they realized this wasn’t just going to be like the Penn game,” said Harvard coach Tim Murphy.

That “big stop” Murphy was referring to may have been the greatest momentum shift of the game for Harvard.

After Lawrie, Yale’s tight end, caught a 27-yard touchdown strike from Cowan to cut the Crimson’s lead to 24-13 on the Bulldogs’ first drive of the second half, Yale forced a Crimson punt on the ensuing drive. With a chance to cut the Harvard lead to four, Cowan and the Bulldogs’ offense took the ball on their own 17. Thirteen plays later, Cowan had orchestrated a brilliant drive all the way to the Crimson three-yard line. First-and-goal.

On the first play, Cowan was gobbled up in the backfield for a loss.

On second down, Cowan made his way back to the three for a two-yard gain.

On third-and-goal, Cowan’s pass to Henley was incomplete.

Yale took a timeout, deciding to go for the touchdown on fourth-and-goal. On the next play, with the crowd on its feet, Cowan lobbed a pass to the back left corner of the end zone.

Harvard cornerback Benny Butler—who, at 5’8, was grossly overmatched in one-on-one coverage with the 6’7 Lawrie—leapt into the air, knocking the ball clear.

It was the third straight time the Bulldogs had failed to score a touchdown in the red zone.

“That’s just the type of play we needed to win today, and we were able to make them,” Balestracci said. “[Yale] was able to move the ball a little bit, but once they get inside the 20-yard line, that red zone, you really have to buckle down and focus, and make some plays. We were able to do that.”

Even though the powerful Bulldog offense racked up some of the day’s most impressive stats, it was the Harvard defense that made the crucial plays when The Game was on the line deep inside the red zone.

And that—not Cowan’s record-setting passing game, not the gutsy play of junior quarterback Ryan Fitzpatrick and not even the continued promise of freshman tailback Clifton Dawson—was The Game’s most impressive performance yesterday afternoon.

“The match-up was offense versus offense, supposedly, and our defense played as well as you can play with your back to the wall.”