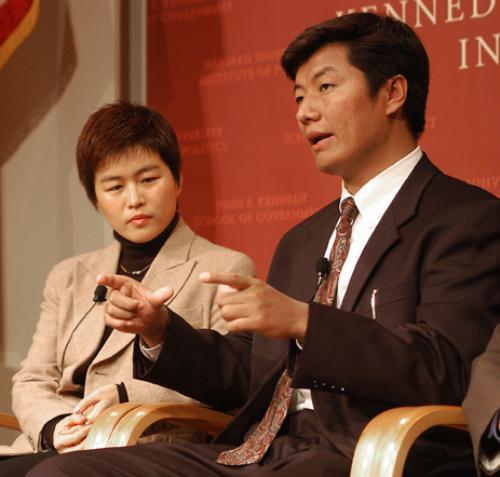 Experts on Chinese-Tibetan relations told a sparse audience at the JFK Jr. Forum Friday that it is possible but unlikely that tensions between China and the region it invaded in 1949 will be resolved.

“The best weapon for the Chinese government is not to talk about it,” said Shiping Zheng, an associate professor of comparative politics at the University of Vermont. “The Chinese government has time on its side. They don’t see any benefits but a lot of risks by welcoming back the Dalai Lama.”

The Dalai Lama, the spiritual leader of the Tibetan people, has been in exile in Northern India since 1959. The Chinese have not allowed him to return.

Director of the International Campaign for Tibet Bhuchung K. Tsering, a member of a delegation sent by the Dalai Lama to initiate talks with the Chinese last May, said that Tibetans are not asking for independence but rather for autonomy.

“China has said that if the Tibetan side can avoid talking about independence all other issues can be resolved,” Tsering said. “The Dalai Lama has said that the survival of culture and identity is more important than the physical survival of Tibet.”

Host of Radio Free Asia Lobsang Sangay explained that Tibetans in China are divided into five provinces, something that Tibetans-in-exile are adamant should be changed.

“Why can’t we have one administrative unit? The Chinese Constitution says that wherever minorities are concentrated they are entitled to an autonomous region,” he said.

But Zheng disagreed with this reasoning.

“It’s not possible,” he said. “The Greater Tibet idea is outdated. Talking about it is a waste of time.”

Moderator Ezra Vogel, Ford research professor in social sciences, asked the panelists whether they thought Tibetan culture was being preserved in Tibet.

Lecturer in Sociology Xiaojiang Hu said she though it was. She pointed out that photos of the Dalai Lama are allowed in Tibet.

“Every year thousands of Tibetans flee to Nepal,” he said. “Why? If it was for economic reasons they would go to Shanghai. They flee because they lack. They do not enjoy autonomy in education or culture.”

“I think that the Chinese government is willing to listen, but not to accusations,” Zheng said. “Loose talk does not help.”

Tsering warned that China should not delay until the Dalai Lama dies.

“There is a solution with the Dalai Lama,” Tsering said. “If the Dalai Lama passes away there will be a radical element [that will act in Tibet].”

When an audience member asked Sangay if a radical element meant terrorism, he responded by stating that “the Dalai Lama has always advocated non-violence but if the Chinese government doesn’t reciprocate, Tibetans will have to rely on traditional means.”

Sangay added that he didn’t think that violence would succeed. He also noted that there is a new leader, Karmapa, who is ready to fill the shoes of the Dalai Lama.

Another audience member asked Sangay whether, if he could choose freely, he would choose an independent Tibet or an autonomous Tibet within China.

“That’s like asking whether I would prefer a Rolls-Royce or a Honda,” Sangay said. “Tibet has sustained itself on its own for the last 2,000 years. Tibetans in exile have been extremely successful.”

Matt J. Aborny, a student at the Graduate School of Education, thought that the forum was informative.

“It helps clarify some of the tensions between China and Tibet. I was coming in naive about it so I was able to frame some elements better,” he said.

“I found it very, very informative. Everyone spoke broad-mindedly with a far-sighted view. It’s important that there is interaction between Chinese and Tibetans,” he said.

Despite the more than 50 years of occupation, there was some hope for change at Friday’s panel.

Sangay said that the Tibetan side was more than willing to negotiate.

“All they need to do is send us an e-mail and we’ll be there.”