Ruggiero notches record for most goals by a defenseman with 73 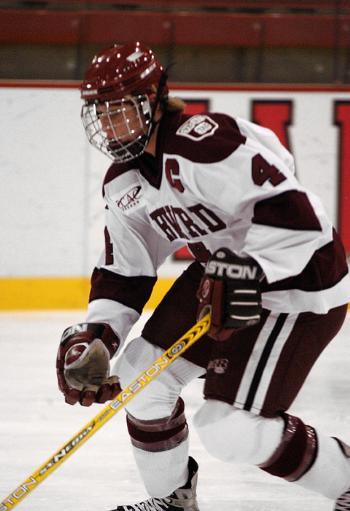 Co-captain ANGELA RUGGIERO (4) had a goal and two assists.
By John R. Hein and Rebecca A. Seesel, Crimson Staff Writerss

In a weekend of career milestones, the No. 3 women’s hockey team picked up two wins against Niagara.

Crimson coach Katey Stone notched victory number 175 with the shutout on Saturday, while co-captain Angela Ruggiero broke the Harvard record for most goals by a defenseman with her 73rd career tally on Sunday.

Junior winger Nicole Corriero extended her scoring streak to five games with one goal and two assists over the weekend.

Corriero broke a 1-1 tie at the start of the third period, scoring the eventual game-winning goal on a pass from sophomore center Julie Chu 30 seconds into the period.

The goal came as a relief for Corriero, who thought she had broken the tie with a goal in the second period until realizing a whistle had been blown just before the score.

“It was definitely an awesome feeling to get it back,” Corriero said. “Chu gave me the perfect the pass and I shot it as hard as I could. I guess the goalie was still moving.”

Corriero also had an opportunity in the first period. Niagara’s Jessica Clermont prevented her from getting a shot off a short-handed breakaway by taking a tripping penalty at 9:46.

Corriero’s goal broke a scoring drought that began after Niagara scored the first goal the Crimson had conceded all season at 11:05 in the first period and was nearly ended by Harvard several times.

“Because this game was tied for two periods, you never knew what was going to happen,” Corriero said. “They could get a break and come in score or we could capitalize on one of our 100,000 opportunities.”

“Either we were too aggressive or [Niagara goalie Allison Rutledge] was letting up really big rebounds so it’d go right past us and they’d transition the other way out of the zone,” Ruggiero said. “Or they were just holding us up and we weren’t getting our stick on the ice, because they’re a physical team.”

In a repeat performance of the day before, freshman forward Katie Johnston put the Crimson on the board in the first period. Co-captain center Lauren McAuliffe passed to junior defenseman Ashley Banfield for a shot from the point. Johnston pounded the rebound home for her second collegiate goal.

The final Harvard tally of the game came in the middle of the third period, when Ruggiero flicked the puck at the goal off Niagara co-captain Lindsay Vine’s arm, deflecting it into the net for the score and pushing Ruggiero past Charlotte Joslin ’90 for most goals by a Harvard defenseman.

The third period saw Harvard switch up the lines a bit. The final frame also seemingly featured Ruggiero on every other shift.

“We needed to find different ways to score,” Stone said. “We did that in the third period. We adjusted our special teams just to get different looks at the net because straight-on rebounds weren’t happening right away.”

Niagara’s lone goal of the series came on a Harvard slip-up in the first period. Sophomore defenseman Jennifer Skinner missed a Ruggiero pass, and Niagara’s Katie Gray picked up the loose puck. Skinner couldn’t catch up to prevent a shot, and Gray ended nearly 250 straight minutes of shutout hockey by Harvard. Gray beat freshman goaltender Emily Vitt on her left side, finding the angle past Vitt’s glove.

Though the goal broke Harvard’s shutout streak, it does not diminish the Crimson’s dominance in its first five games. Harvard has posted 34 goals while holding its opponents to just one.

“That’s a reflection of how much we are emphasizing defense this year,” Ruggiero said. “Last year, obviously we played good defense, but I think it’s going to be more of a priority this year just because the games are going to be a lot closer.”

Vitt posted a solid 16 saves on 17 shots. Rutledge, in her return from a one-game suspension, made an impressive 50 saves in the loss.

“We gave Vitt a heart attack a couple times, but she was right there for us,” Stone said.

The win also marked the first game of the season in which the Crimson lineup was at full force, with Ruggiero and Chu returning from national team play in Sweden and senior winger Mina Pell and Johnston joining the team after the field hockey and soccer seasons, respectively.

Leading the way for the Crimson was Chu, who wasted no time in making her return known to the Bright Hockey Center. The forward scored twice and assisted once in the first period.

Chu knocked in both of her goals from just outside the crease. For her second tally, Chu streaked diagonally across the ice and through Niagara’s zone, where Ruggiero fed her a perfectly timed pass. Without so much as slowing her stride, Chu flicked the puck past Niagara goalie Jennifer Mascaro’s left leg and sent the Crimson into the first intermission with a 3-0 lead.

From the initial drop of the puck, the Harvard women held the upper hand. In just the first two minutes, the Crimson commenced firing an arsenal of shots at Mascaro, and it took less than five minutes for Johnston to tally the team’s first goal of the game and the first goal of her collegiate career.

Harvard played an aggressive game but failed to capitalize on a number of scoring opportunities, while Niagara’s anemic offense never fully responded to the smothering Crimson defense.

The Purple Eagles answered Harvard’s continued domination with five penalties in the second period, one of which led to a McAuliffe goal 13 seconds later. Ruggiero passed from the point to the right circle, where McAuliffe scored past an overextended Mascaro.

“We actually planned that [play] between periods,” Ruggiero said.

But despite Harvard’s initial outburst, the final frame of action remained relatively quiet. Harvard took only four shots on goal, while Niagara increased its output to five.

Boe finished a quiet but nonetheless impressive night between the pipes with seven saves. Mascaro took the loss with 33 saves in hand.

“[Boe] is ready,” said Stone. “She’s ready. Games like this, where the action takes place across the ice are not to be underestimated, and Boe has proven her dependability.”

Harvard returns to action on Saturday, hosting Maine at 2 p.m.

—Staff writer John R. Hein can be reached at hein@fas.harvard.edu.