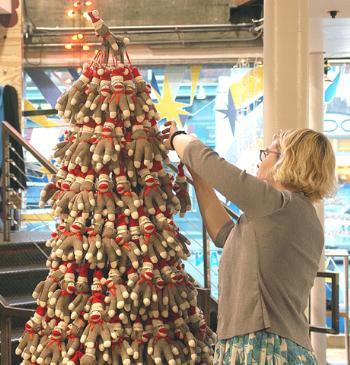 Tucked away behind a sleek storefront almost smack in the middle of Harvard Square, five salespeople are the only ones enjoying the fragrant smell of the Origins store.

Despite a bustling flow of pedestrian traffic on the street yesterday, few customers were stopping in to get a jump on holiday shopping.

But Betsy Beierle, the store’s assistant manager, said she is optimistic about the upcoming holiday season, echoing the sentiments of many Square merchants.

“Customers this year are definitely spending more,” she said enthusiastically.

As the holiday season approaches and the economy shows signs of improving, most vendors in the Square have positive sales expectations—with the exception of businesses in sectors that continue to be hit hard, like photography and books.

Lori Kluender, a manager at Urban Outfitters, said she has “a stronger outlook overall.”

“I felt like people have been a little more conservative with shopping,” she said. “But when you get closer to the holidays, people will buy anything.”

She and Harvard Coop President Jeremiah P. Murphy ’73 also said that as Christmas gets closer and closer, retailers often see a shift in sales away from their mainstay products.

The Coop, for instance, sells fewer books and more clothes, mugs and jewelry during the holiday season, according to Murphy. He stressed the importance of stocking more of these items that cater to students and alumni who are looking for Harvard-emblazoned holiday gifts for their families.

Though few stores advertise specifically to Harvard students, many are grappling with students’ specific buying habits. Some, like Origins, are offering special gift sets at reduced prices for cash-strapped students. Other retailers said they have lost a lot of student business to online vendors.

But a recent spate of warm and sunny weather may be helpging to stores crowded.

Citysports manager Joanie Kelley said that although winter clothes sales at the store have not taken off yet due to the high temperatures, the increased foot traffic has offset any potential loss. “Supply and demand have matched up so far,” she said.

Jaime Kubik, the buyer for Cardullo’s, said the weather has been a huge boon for the gourmet food shop.

According to the projections from her distributors, she said, this year’s Christmas season should be one of the best in years for the gourmet food business. She said gourmet food sells well even in leaner economic years because “it’s a way of combining necessity with luxury.”

Yet, the beautiful weather won’t be enough to help some vendors from areas of retail where there has been a trend of declining sales.

With demand for film and traditional cameras waning because of the growth of digital technology, the Ferrante-Dege workers aren’t too upbeat about their holiday prospects.

“[This year] couldn’t get much worse than last year,” said Hays.

Murphy also said the book market has been flat this year.

“The book industry has not been very hot this year,” he said. “The economy has not translated into more consumer spending.”

In the end, Murphy is only cautiously optimistic.