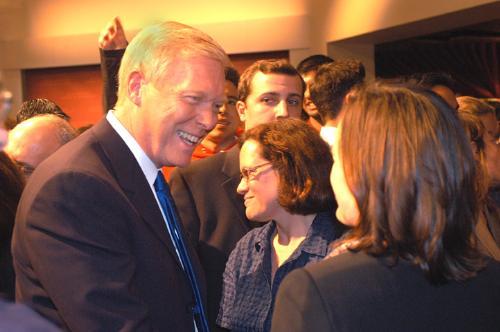 Rep. Richard A. Gephardt blasted President Bush on foreign policy while defending his initial support for the war in Iraq at a taping of MSNBC’s “Hardball” at the Kennedy School of Government last night.

The Democratic presidential contender, who has made headlines by labeling Bush’s foreign policy a “miserable failure,” continued to criticize the commander in chief, declaring him “incompetent” and calling the war in Iraq a “horrible mistake he is committing for the American people.”

“It’s been five months since he landed on an aircraft carrier and he still can’t figure it out,” Gephardt, D-Mo., said, eliciting applause from the packed studio audience in the John F. Kennedy Jr. Forum.

An hour earlier, about 100 students gathered in the Kirkland House Junior Common Room (JCR) for a more intimate meeting with the candidate. The audience was treated to a veritable preview of that night’s “Hardball” taping; many of Gephardt’s responses in the Kirkland question and answer session were identical to the ones he later gave Chris Matthews, the show’s fast-talking, pugnacious host.

At the outset of both appearances last night, the candidate eagerly volunteered his reasons for changing his stance on the war. Some critics have called Gephardt onto the carpet for voting in favor of a U.S. invasion of Iraq and subsequently criticizing the war effort in the course of his campaign.

Skirting a storm of criticism, Gephardt attempted to remain glib.

Upon setting foot on the “Hardball” stage last night, Gephardt joked to Matthews, “What are you doing here? Neither of us could have gotten in [to Harvard].”

But the friendly rapport between interviewer and interviewee quickly disappeared, with Matthews berating Gephardt on his decision to vote in favor of the Iraq war, hardly allowing the Democrat to get a word in edgewise.

“I would not have voted to go to war if we knew at the time that there weren’t any nuclear programs [in Iraq],” Gephardt finally told Matthews. He also added that he had conferred with numerous intelligence officials before casting his vote on the matter.

For a candidate best-known for his expertise on domestic issues, Gephardt spent a large amount of time discussing foreign policy and national security. Following Oval Office hopeful Howard Dean’s surge in popularity this summer, the field of Democratic contenders has taken to Dean’s harsh critiques of the current administration.

Matthews challenged Gephardt on the latter issue, asking whether he would repeal Right to Work laws that prohibit unions from requiring membership for all of a company’s workers. After a heated exchange, Gephardt insisted that he was against the laws, and would pass legislation to repeal them if he could.

The congressman’s support of unions falls into a broader social agenda that composes the domestic base of his platform.

“We need to return to programs and ideas that will lift up the poor,” Gephardt said, reminding viewers that scholarships and government programs helped him attend college. “We’ve had a president who’s been there for big business, we need a president who will be there for workers.”

Amidst a sea of College Democrats running to and fro as they shouted into their walkie-talkies, Gephardt found his way to the Kirkland’s JCR, where he spoke with a crowd of nearly 100 before his “Hardball” debut.

Brian M. Goldsmith ’05, who interned on the Gephardt campaign this summer, introduced the candidate at the Kirkland event, calling the Missouri congressman a “profoundly good and honest and decent public servant.”

Gephardt began his talk with a brief recounting of his upbringing as the son of a milk truck driver in St. Louis.

Although he maintained a conversational style, Gephardt’s calm veneer quickly disappeared when he began taking audience questions on policy. At times, he didn’t even need a microphone, his voice growing louder over the course of the Kirkland session—until he was literally yelling.

The congressman’s fiery spirit showed through when discussing his signature issue, workers’ rights and his plans to increase social welfare. But he saved his true vitriol for his Republican opposition.

“This administration is so intolerant, so absolute, so assured of their own opinion of the world, of the way things should go,” he said. “I learn from other people by listening to other people. You should be willing to listen to other people’s views.”

Gephardt ended the talk in a reflective tone that emphasized his plans for the future.

“I have a philosophy of life,” he said. “We’re all tied together... What affects one directly affects all of us indirectly.”

Students had mixed reactions to the candidate.

“He seemed very polished. He held himself very well against Matthews,” said Krister B. Anderson ’07. But Anderson added, “I’m questionable about his foreign policy experience.”

Mark T. Silvestri ’05, spokesperson for the Harvard Republican Club, who reaffirmed the club’s unwavering support of the Bush administration, chose to take issue with more specific points of Gephardt’s platform.

“Nationalized health care is not the most efficient way to provide insurance for all Americans,” he said. “Opposing the right to work is by no means a wise decision for the country as a whole and for individual workers.”