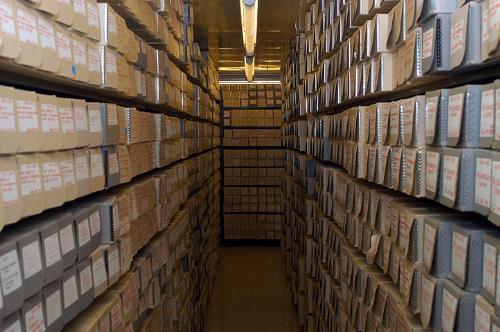 Students have mixed opinions over Gov Docs’ planned move to Littauer. Some say that a new home out of the main Yard will be short-staffed and inconvenient, others say the documents’ locale doesn’t much matter.
By Leon Neyfakh, Contributing Writer

Library workers say a plan to move the Government Documents Department, commonly known as Gov Docs, from the Lamont Library basement to Littauer Hall would deter undergraduates from using the resource, and hurt the department’s service.

The plan comes as part of the Harvard College Library’s (HCL) ongoing reorganization, which also includes the restructuring of Hilles and Lamont. Severe budget problems facing the department also have made for tension between library employees and administrators.

Those opposed to the Gov Docs move highlight the deleterious effects it would have on student users.

“There are a lot of disadvantages to students to have the Gov Docs materials in Littauer,” says Geoff Carens, a current Gov Docs employee and a representative of the Harvard Union for Clerical and Technical Workers (HUCTW). “The physical environment there is terrible. Moving [the department] to Littauer makes it less available.”

Beth Brainard, HCL’s director of communications, cautions that plans for Lamont as well as Gov Docs itself are tentative, but says that ideas about possible uses of the department’s space include the creation of a cafe and a general social area. While administrators emphasized the uncertainty of the Gov Docs relocation, a memo sent to library employees on October 3 cites the move as one of five steps HCL will take to lower expenditures.

According to Brainard, plans to relocate Gov Docs and install new facilities in its place are part of an effort to shape Lamont into a “service station for undergraduates.”

Jay Harris, vice chair of the Faculty Library Committee, says that undergraduates are not using the space as much as they would if it were replaced with different materials and facilities.

Harris explains that according to federal law, every Gov Docs collection must be open to the public.

“Lamont is a building that is otherwise secure to undergrads with the exception of that space. Undergraduates certainly use Gov Docs, and nobody’s suggesting otherwise, but the primary users of Gov Docs are...outside researchers who would probably be better served having [the department] over in Littauer,” he says.

According to John Collins, a longtime reference librarian at Gov Docs, HCL is operating on a misconception about Gov Docs’ users. Collins estimates that 90 percent of his reference time is spent with undergraduates.

“If they were pressing me to move something here that is more highly used by undergrads than Gov Docs is, I would carry our materials to Littauer for them,” Collins says.

Rohit Chopra ’04, president of the Undergraduate Council and a student employee of Gov Docs, says he is almost certain that “the students this move will affect most were not consulted.”

According to Diane Garner, librarian for the social sciences, statistics for Gov Docs’ usage and circulation were most recently compiled in 1993. Donna Koepp, head of the Gov Docs department, says that a steering group is currently being formed to investigate student opinion, the benefits of the proposed move and the logistics of the plan.

Collins and other Gov Docs regulars also worry that locating Gov Docs in Littauer would cut it off from the heart of Harvard’s libraries and discourage undergraduate use.

“If you’re doing humanities or social sciences research, chances are you’re doing research in Widener or Lamont or Houghton, all of which are a few feet from each other,” says Noah M. McCormack ’04, a history concentrator who voiced his concern about the relocation. “They’re all essentially one complex. It’s an integrated collection and [the relocation] is very shortsighted. I didn’t know where Littauer was until last semester.”

“As far as I know, people don’t use Gov Docs in a bubble,” says Max P. Davis ’07, another concerned Gov Docs user. “Having it all there in one convenient location is fantastic.”

On a recent walk through Gov Docs though, not all undergraduates were so concerned.

Collins and Carens are also worried about the staffing of the potential Littauer Gov Docs department. According to Carens, recent layoffs at Hilles Library have Lamont employees “‘in fear of losing [their] jobs.” A campaign to educate Harvard students about layoffs has been in effect since this summer through the posting of anti-layoff leaflets and appeals to the FAS administration, Carens says.

Connected with these employment issues, are concerns about the Littauer staff’s ability to manage the complex organization in the Gov Docs department.

“The Gov Docs staff has expertise in assisting users with the collection,” Chopra says. “The reference assistance is invaluable to many people, which probably can’t be replaced if the collection is divided up among several libraries.”

According to Carens, HCL intends to absorb the Gov Docs materials into Littauer, and transfer all responsibility for reference assistance to its current staff.

“By moving the collection, they can reduce staff and they can save money that way. That’s kind of the excuse that they’re using,” Carens says.

Director of HCL Nancy Cline says that staff at the new Gov Docs would be just as experienced and well trained as the current employees, but said she could not guarantee that the actual staff will remain identical.

“Without question, we will have to have people who understand that government documents collection,” Cline says. “You can never predict whether people want to stay or leave, but [we would keep] the types of positions that are currently with us. We would need to have that type of expertise.”

If the proposed plan were implemented, the Gov Docs department would leave its 30-year old home in Lamont when the Center for Government and International Studies (CGIS), currently under construction on Cambridge Street, is completed by the end of 2005. Relevant materials would be moved to the new building, making room in Littauer for the enormous collection of Congressional publications, foreign legislative debates and other publicly available archival records that is currently held in Lamont.

The tentative plans are part of a much larger, general renovation of Lamont Library, which will include repairing its aging electrical and plumbing equipment, building a new reading room on the fifth level and installing an elaborate multimedia center on the third level.

According to Cline, plans for that renovation were first proposed in 1999, but promptly put on the back burner because they conflicted with the Widener Library renovations.

“We couldn’t bear to have Widener and Lamont torn up at the same time,” says Cline. “There was a question of how much funding it would take to do the project well.”

Cline attributes the anxiousness felt by employees to the challenges and budget difficulties the HCL is facing as a whole. Although Harvard’s endowment is at an all time high, the payout to HCL, or the money available for spending, has been frozen because buying power is still down 11 percent from previous years. The $90 million renovation of Widener, which so far has stayed on schedule and within budget, has put a significant dent in how much funding the HCL can allocate to other causes, according to Cline.

Sidney Verba, chair of the Faculty Library Committee, says measures to curb spending have taken place on all levels of the HCL’s operation, including an increased reliance on outsourced cataloging, a minimization of book preservation to a “viable core” and the canceling of duplicate journal subscriptions.

Cline says the move to minimize costs may be behind tension over the Gov Docs move.

“Change is uncomfortable, particularly at a place like this,” Cline says. “At Harvard, whatever change there has been in the past has generally been change that results from growth-happy change. This is a very different kind of change, and I think that’s part of what makes it very unsettling. There’s an inherent tension in that for almost all of our employees.”