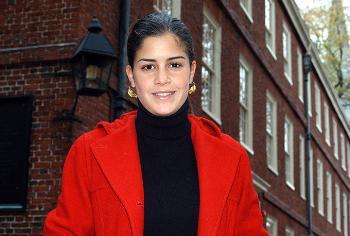 After Mikhail Gorbachev laid the final blows to Soviet Communism, who’s going to stop him from laying a few harmless
By E.e. Greene

After Mikhail Gorbachev laid the final blows to Soviet Communism, who’s going to stop him from laying a few harmless smooches on the cheek of a pretty woman? Not Miranda L. Kobritz, a Divinity School student who found herself the object of the former Soviet president’s affections last month while riding an elevator with him at a hotel in New York City.

Kobritz, who serves as Gorbachev’s personal assistant during his trips to the U.S., found herself an unwitting participant in a spontaneous tutorial in Russian cheek-kissing etiquette put on by Gorbachev for his slew of aides and translators. In the elevator’s close quarters, Gorbachev leaned in to kiss Kobritz on the cheek—once, twice and an all-important third time. Taken aback, yet wanting to roll with the kisses, Kobritz responded, “For you, Mr. Gorbachev, four, five—as many as you want.”

What would have otherwise been a quaint entry into Kobritz’s personal diary, however, found its way into the widely read “Talk of the Town” section of the The New Yorker. Though Kobritz’s response was intended as a witty retort to the aging president’s playful advances, she fears that it seemed less than innocent as recounted in the pages of The New Yorker. “I’m worried I came across as a tart,” says Kobritz. Kobritz’s image also wasn’t helped by the fact that the article concluded with Gorbachev’s assessment of her make-up preferences. “This makeup they put on!” [Gorbachev] exclaimed. “My lips almost got stuck to her cheek.”

While she fiercely maintains that she only powders, Kobritz realizes that this sort of publicity is an occupational hazard for a young woman employed by a former world leader from a very different social culture. For the time being, Kobritz is content working for her high-profile boss. “Gorbachev’s a very jolly guy,” says Kobritz. But, the question remains, is he a good kisser?