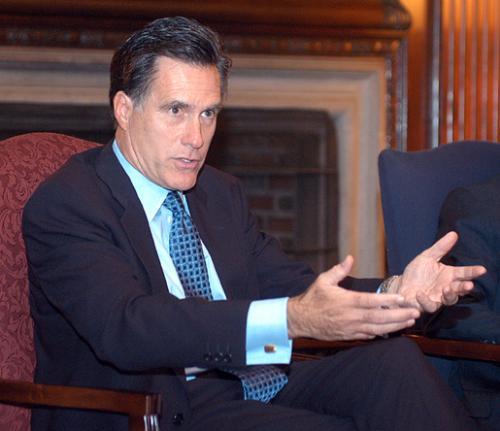 Massachusetts Gov. W. Mitt Romney outlined the ins and outs of campaigning before a packed Kirkland Junior Common Room yesterday, saying that the key to a successful campaign is defining yourself as a politician before other candidates can do it for you.

The Republican Romney drew from his experience of running unsuccessfully against Mass. Senator Edward M. Kennedy ’54-’56 for his seat in 1994 and then winning the governorship in 2002 in a state controlled predominantly by Democrats.

Institute of Politics (IOP) fellow Ben Coes, the manager of Romney’s successful 2002 bid for governor, brought both the Governor and Republican political strategist and former IOP fellow Mike Murphy to Kirkland as part of his IOP study group on how to win a political campaign.

Romney explained what he describes as the six major parts of campaigning—people, product, strategy, operations, energy and motivation—that led to his 2002 victory.

Running on the Republican ticket in a state where only about 12 percent of voters are registered Republicans, Romney said part of his winning strategy was effectively presenting himself to voters.

“If you don’t define yourself well, your opponent will do it for you,” he said, adding that in 1994 Kennedy defeated him by pigeonholing him as a wealthy businessman out of touch with the average Mass. citizen.

To ensure that his opponent would not exert the same level of control in the 2002 race, Romney named Mike Murphy—who recently served as the chief strategist for Arnold Schwarzenneger’s gubernatorial campaign in California—the lead strategist of his campaign.

“Murphy was in an entirely different league with regard to campaign strategy,” Romney said.

In the gubernatorial campaign, Murphy and Romney said they tried to present the successful businessman as a leader who would bring change to the primarily Democratic Massachusetts government.

When poll numbers indicated that his opponent was beating him in the last days leading up to the election, Romney rode through the state on a bus named the “Wheels of Change.”

Because Democrats wield such power in Massachussetts, Romney and Murphy said that a Republican candidate running for office in the state needed to be independently wealthy or take part in dramatic fundraising efforts.

“In most states you don’t have to do that—you’ve got two parties,” Romney said.

After serving as governor for a year, he conceded that, with a state legislature that is roughly 85 percent Democratic, change has actually been hard to come by.

In the past year, Romney said, he has vetoed 300 bills—and 299 of them have been overridden.

By working in the business world, the governor said that he not only amassed more wealth than he had ever imagined, but also developed skills important for politics.

“Being a leader of the private sector required consensus building,” he said in response to a question about the differences between working in the public and private sectors.

And even though he lacked political experience before entering the governor’s mansion, the political life was not entirely foreign to Romney, the son of deceased former Michigan governor George W. Romney.

In fact, Romney suggested that his family name did play a role in the successs of his 2002 campaign.

“I give the family name 5 to 10 percent of the weight and the campaign’s effectiveness 90 to 95 percent,” he said.