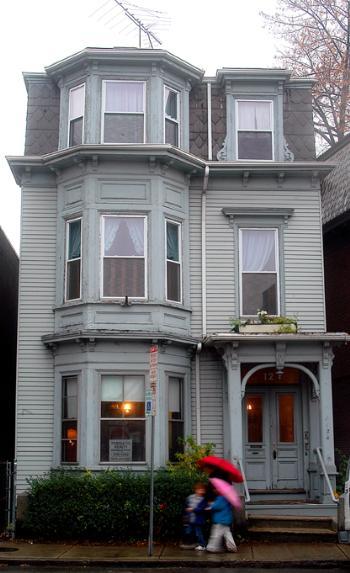 Sigma Chi’s Harvard chapter, Kappa Eta, placed a bid on this house at 1124 Mass. Ave. The property, located near the intersection of Mass. Ave. with Arrow Street, sold for a price higher than the chapter offered.
By Daniel J. Hemel, Contributing Writer

Sigma Chi has once again been left high and dry as real estate woes continue to plague the fraternity, which lost its former home in 2001.

Representatives for Harvard’s Kappa Eta chapter of the national order—which for two years has been searching for a new home near campus—placed an unsuccessful bid last month on a stately grey Victorian house on Mass. Ave. according to a local realtor who owns the property.

The property, located near the intersection of Mass. Ave. with Arrow Street, was initially listed at $1.495 million and later reduced to $1.094 million, according to Robin K. Kelly, a realtor at Coldwell Banker Residential Brokerage.

Guffy, who is himself co-owner of the real estate firm Charles Associates, said that he is hoping to finalize an agreement with a higher-bidding Boston engineer as soon as next month.

Jean-Pierre R. Jacquet ’05, the chapter’s president, said that members of the fraternity toured the building on multiple occasions, but that “neither the undergraduate chapter nor the alumni of Harvard Sigma Chi are currently planning to purchase or lease any property.”

According to Guffy, none of the university’s four other unofficial fraternities toured the 3,300 square foot building, which is alternately listed as both a commercial property and a three-family residence. Groups of Sigma Chi students and alumni began visiting the house in April, he said.

But despite the fraternity’s interest in the property, the group “did not respond to my counter-offer,” Guffy said.

The failure of Sigma Chi’s bid on 1124 Mass Ave. is only one in a series of setbacks in the fraternity’s hunt for real estate.

In 1996, the fraternity acquired partial ownership of 43-45 Mt. Auburn St., the longtime headquarters of the now-defunct Pi Eta Speakers Club,.

Pi Eta, which commenced operation at Harvard just months after the end of the American Civil War, closed its doors in 1991 after a Northeastern University alumna charged that she was raped at the club three years earlier.

Under the 1996 agreement, Sigma Chi gained five positions on Pi Eta’s 12-man board and was slated to assume full control of the property in 2026.

But the handover hit a snag in 2001, when Pi Eta members sought to remove the Sigma Chi contingent from the board and put the building up for sale. Alumni of the speakers club, alleging that Sigma Chi had shirked its responsibility to maintain the building, claimed they had a right to opt out of the 1996 deal.

A rancorous legal struggle between the two clubs ended in the summer of 2002 when Pi Eta agreed to pay an undisclosed sum to Sigma Chi.

The club then sold the Mt. Auburn St. property to the Foundation for Civic Leadership, a non-profit organization, for a reported $2.75 million.

Sigma Chi has since been searching for real estate in Cambridge, but Jacquet said that sky-high property values have impeded the effort.