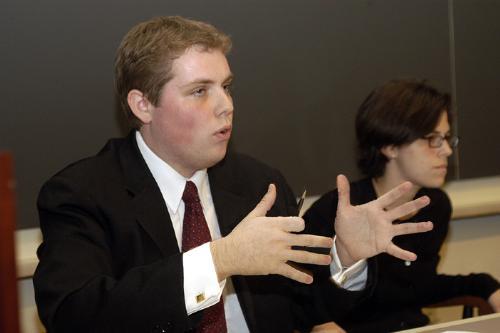 The abortion dialogue moved beyond aggressive postering campaigns and political displays last night, as almost 100 students and community members turned out for a debate between leaders of pro- and anti-abortion-rights groups.

The Emerson Hall debate came as groups on both sides of the issue have stepped up publicity efforts—efforts which have at time drawn criticism.

HRL and Students for Choice agreed to temper mentions of rape on their posters after an HRL placard drew the ire of campus sexual assault advocates earlier this fall.

Last night, abortion-rights advocates pointed to women’s autonomy and personal freedom as well as appropriate limits on the responsibilities of government to argue for a fundamental right to an abortion.

Anti-abortion panelists’ arguments hinged on the rights of the unborn fetus, and the contention that life starts at conception.

Moderator John H. Jernigan ’06, an HPU member, said the point of the panel “was to focus more on policy debate, not the morality of the abortion issue.”

Abby L. Fee ’05, president of Students for Choice, opened the debate arguing that it is not a question of when life begins but of limits on government intervention.

“We need to look to the Constitution and the right to privacy,” she said, highlighting the government’s obligation to an individual’s dignity and autonomy. “It is not what is moral or immoral, but where the government should interject itself.”

Tom M. McSorley ’06, legislative director of the Dems, agreed with Fee. “The law has no place to go inside the sphere of privacy,” he said.

Former HRL President Melissa R. Moschella ’02 countered that the legality of abortion—or lack thereof—rests on an understanding of when life begins. “Before the birth, it is murder,” Moschella said. “Abortion doesn’t make [a woman] unpregnant, it simply kills the fetus.”

Fellow panelist Claire V. McCusker ’04 of HRL and former editor of The Harvard Salient contended that “life is more fundamental than freedom.”

As the crowd filtered out, HRL President Dan R. Tapia ’05 called the debate a success, saying his group was ready to argue abortion “any time, any place.”

McSorley said the change in forum was an intentional one. “We wanted to make a debate rather than a rally,” he said.

And audience members said they appreciated the groups’ cooperation.