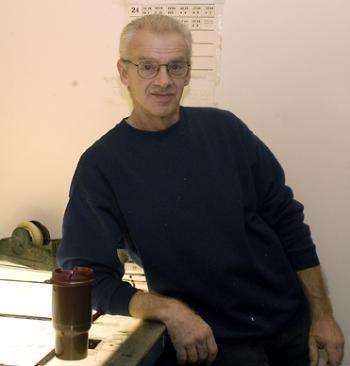 George D. Dioguardi takes a short break between preparing The Crimson to be printed.
Advertisement
Advertisement

It was a dark day last March when we at FM realized that our novice production pace—a tad on the galatial side—was causing consternation across The Crimson.

“Even those boneheads could figure it out,” Brian M. Byrne, The Crimson’s 22-year veteran press operator told us. The boneheads he alluded to were the FM editors who had retired in December. An unfavorable comparison to their organizational skill was a much needed wake up call. We were still slow sometimes, but we felt considerably worse about it. So it was no surprise to discover this week that both George D. Dioguardi, the plate maker, and Byrne have daughters who are close to college-age. This explains the comforting mixture of paternal concern and disappointment in us that we can sense from them every time we get our pages in late, hastily mumbling totally ridiculous and implausible excuses. One of the lucky things about finishing the magazine in the early hours of the morning is that we get to chat regularly with Byrne and Dioguardi, who are always impossibly friendly and ready for self (or FM-)deprecating banter at any hour of the morning. Not everyone makes it to The Crimson’s basement press room.

“Nobody knows us down here,” Byrne says. “Sometimes I think they think the paper gets printed automatically and distributed.”

And that’s too bad. So, after a year of harried and hurried hellos, we stuck around to get better acquainted with the process and to report back on how it all works.

3:30 a.m. Dioguardi arrives at The Crimson after a 20-minute ride in from Revere. His alarm goes off at 2 a.m. every day so he usually tries to go to sleep by 6 or 7 p.m. At this point, after working at The Crimson for almost 15 years, he says sometimes he even wakes up without the alarm. He doesn’t stop for breakfast on his way in, just a coffee and a donut at Mike’s Donuts in Everett. To accompany this meal, he smokes GT One full flavor cigarettes. “I buy generic ones, whatever’s cheap,” he says. With the radio tuned to 1510 AM, Dioguardi gets to work taping film together to burn the image from the film on to aluminum plates. When asked if he ever reads the pages of The Crimson when he’s taping down the film, Dioguardi laughs. “No, not really,” he says. “Sometimes I catch some mistakes though when I’m going to strip up the pages.”

3:30 a.m. to 4:30 a.m. Dioguardi burns the film on to aluminum plates using something called a “Ultra-Plus Flip-Top Platemaker.” He says it is easy to use. It does not appear to be that simple.

4:12 a.m. Dioguardi begins brushing the burnt aluminum plates with developer. This is the corrosive chemical portion of the evening. “I’m wearing two bad gloves,” he says, holding up the gloves for inspection. After brushing on and washing off the developer comes the finisher wash.

5:30 a.m. Byrne arrives at The Crimson after driving in from Framingham, where, he says, he’s lived “since I was five years old.” It’s a relatively light morning at The Crimson, with only one run of the daily newspaper on the docket, so Byrne is more chipper than usual. At least, when he cracks wise about how long it takes to print FM (“your job keeps me here until 11 a.m. usually”) he does it good naturedly, reveling in the fact that he won’t be running a 24-page magazine until at least the first week of February.

5:34 a.m. It’s time to bend the aluminum plates to get ready for the press. Byrne deftly operates something that looks kind of like a medieval torture device. Aluminum, it turns out, bends easily.

5:43 a.m. The plates are loaded on the press and Byrne explains the process by which the ink gets transferred from the plate to the paper. He explained it much much more clearly than is possible to replicate here, but essentially alkaline solution mixed with water is run over the aluminum plates imprinted with the negative image from the film. The image on the plate, covered in the finisher chemicals, repels the alkaline and the alkaline repels the ink. The ink only sticks where there is no image. Since it’s printed as a negative this all begins to make sense. At least it makes sense to Byrne.

5:47 a.m. Once the presses start running, Byrne adjusts the ink levels and the position of the paper rolls on the press. Even with the press clanking quickly away, he moves with practiced ease in, out and around fast moving rollers and levers. Before he came to The Crimson, he apprenticed at the Middlesex News. “Right out of high school I went to work there,” he says. “This is the path I took.”

6:03 a.m. It’s hard not to get ink everywhere while adjusting the amount necessary to print the paper. “I’ve got four black sweatshirts and four black jeans,” Byrne explains, chuckling a little at those not fortunate enough to have planned wardrobe appropriately.

6:07 a.m. While Dioguardi stacks the papers coming off the folding machine, Byrne ties them together. Left untouched for now on the side of the table is Byrne’s coffee and cigar nub.

Around 6:15 a.m. Dioguardi leaves The Crimson to deliver bundles of the paper to some Houses. Though earlier he said he’s a Boston baseball and football fan, he’s shielding his head from the December morning with a Yankees hat. “When the Yankees win, I’m a Yankees fan,” he says as he rolls the container with the papers out the door.

6:45 a.m. With the entirety of the press run off and bundled for delivery, Byrne now has time to make sure the proper deliveries are made and reflect on The Crimson. “I actually like working here,” Byrne says. “The best thing is if you don’t like somebody you’re only going to have to deal with them for a year.”

On that note, FM bids farewell.