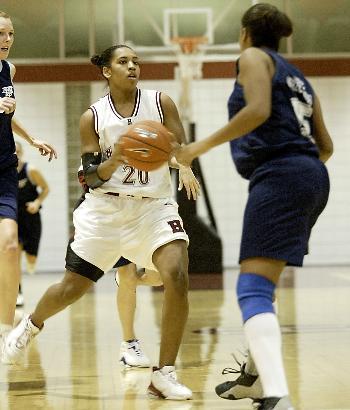 Cambridge isn’t the only thing on ice.

The Harvard women’s basketball team hasn’t played a game in just over a week because its game against Lafayette scheduled for Saturday was cancelled after the Leopards’ bus left too late to outrun the Nor’easter.

Tonight, the Crimson (3-2) takes on Northeastern (2-2) on the Huskies’ Solomon Court at 7 p.m., with sophomore Jess Holsey starting at shooting guard.

After two shoulder dislocations limited her playing time to 14.4 minutes per game last season, Holsey still ices her shoulder every night. But a summer of rest has her averaging 29.2 minutes on the court this year, good for third on the team, behind co-captain forward Hana Peljto and junior center Reka Cserny.

“Jessica Holsey has enormous potential and the few times she was healthy last year, that showed,” Harvard coach Kathy Delaney-Smith said. “I think she has stayed healthy this year for the most part.”

Junior guard Rochelle Bell, a quick presence on defense, was last year’s starter, but she has been hampered this season by back and hamstring injuries in addition to the flu.

“I have been dealing with a bulging disc in my back and it has caused siatic pain down my left leg along with left hamstring issues,” Bell said.

Bell missed three-and-a-half weeks of practice even before the Crimson’s first game on Nov. 22, but has since returned to something near full strength. She will also be getting a cortisone shot during break, which may alleviate her leg pain.

“Rochelle has unfortunately been hit with some nagging injuries [and] the flu,” Delaney-Smith said. “I like what Rochelle is doing—she’s a different player than Jessica.”

This year, Delaney-Smith has made it clear that starting spots will not be set permanently, though Harvard returns its Ivy League champion lineup. Bell’s injury made the choice easier.

Though Holsey cites Bell’s injury as the reason for her starting spot, Holsey has proven that she deserves the position. The guard is third on the team in scoring, as her 10.8 points per game again put her behind Peljto (23.4) and Cserny (17.6).

“She basically can get her shot off against anyone,” Delaney-Smith said. “Not many players have that strength.”

Holsey has scored in double figures three times thus far, including her career-high 15 points against Florida State. Using a pull-up jumper and accurate three-point shooting, she has demonstrated her ability to score under pressure, but she’s also been known to press her opponent as well.

Even before the season began, Delaney-Smith was calling Holsey a “superstar.” The sophomore guard spent the summer doing exercises to strengthen her shoulder and resting her body to ward off the tendonitis that nagged her knee last year.

“I didn’t do anything,” Holsey said. “I biked instead of running. I just shot, but didn’t play any pickup or anything. I kinda stayed off my knees and didn’t do that much playing.”

However, she got a chance to shake off any rust during the team’s trip to Europe before returning to Harvard, where she has done nothing but impress.

Tonight, the Crimson has the edge on Northeastern in the talent category, but the Huskies’ have a staff foundation that promises competition.

“I think they have a great coaching staff,” Delaney-Smith said. “I really respect what they do and how they prepare their teams. I remember a number of times when their game strategy was right on the money against us.”

Northeastern last played on Monday, when the Huskies lost to Providence 62-48.

But rather than flooring concern over rustiness, Harvard is eager to play someone other than itself.

“I’m excited to be playing someone,” Holsey said. “It was really tough to get all pumped up for the Lafayette game and have it be cancelled the night before.”

“I like to think that we all love practices—I’m kidding myself, I know that,” Delaney-Smith laughed.

—Staff writer Jessica T. Lee can be reached at lee45@fas.harvard.edu.