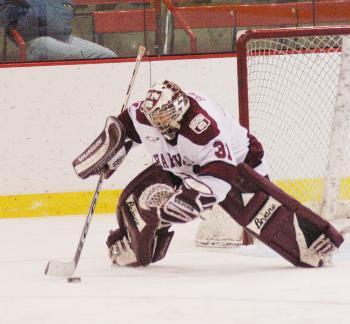 Sophomore goaltender Ali Boe has firmly established herself as the top goaltender on the Crimson after recording 59 saves in two games this weekend against Minn.-Duluth.
By John R. Hein and David H. Stearns, Crimson Staff Writerss

In what has turned out to be her breakout season, Harvard women’s hockey goalie Ali Boe had a two-game stretch to remember this past weekend in Duluth, MN against the No. 4 Bulldogs.

The sophomore netminder turned in two solid nights of work over the weekend, setting career highs for saves in each game and pushing the Crimson (13-0-1) past Dartmouth (9-1-1) as the nation’s second best team, according to U.S. College Hockey Online (USCHO).

In Harvard’s 2-2 tie on Friday night, Boe stopped 28 of 30 shots to keep Harvard in the game before shutting Minnesota-Duluth (UMD) out during the overtime to preserve Harvard’s unbeaten streak.

But Boe saved her finest performance for Saturday night’s 7-2 victory, when she complemented Harvard’s offensive explosion with a riot of her own in net, making 31 saves on 33 shots for her eighth win of the season and Harvard’s 12th.

Boe posted her phenomenal 59 saves over two games against a Bulldog offense that averages nearly four goals a game and has posted scores of eight and nine goals.

“You’ve got to know that they’re going to move the puck around a lot, so you have to be able to move side to side a lot and keep on top of the angles,” Boe said. “That way, if they pass from one side to another, you have a better chance of stopping them because you’ve cut off the angle.”

Leading the UMD attack were Olympian forwards Jenny Potter and Caroline Ouellette, who both rank in the top-five in the nation in scoring.

“Going into the game against Duluth we knew that they had one of the better offenses that we’ve faced,” Boe said, “and that we would really need to work hard in the defensive zone and try to limit them to one shot.”

Returning home from Duluth with a win and a tie no doubt further boosts both Boe’s and the team’s confidence. Last March, the Crimson lost the national championship to the Bulldogs 4-3 in double overtime. That meeting also saw an outstanding performance from Jessica Ruddock ’04, who has since retired due to hip injuries.

Ruddock’s absence between the pipes left a huge question mark regarding how the Crimson would fare in 2003-04 for many, but not Coach Katey Stone.

Before the season had even started, Stone had complete confidence in the Crimson goaltenders.

“I’m not concerned about our goaltending,” Stone said days before Harvard’s first preseason scrimmage. “Goaltending is going to be solid and steady.”

But at the time, no one knew for sure how steady, or if Boe and freshman Emily Vitt would split time in goal.

“I didn’t really know what to expect coming into this year,” Boe said. “I just wanted to come in and work hard and keep on improving.”

The competition between the two goalies for Harvard’s starting spot forced Boe to step up and shine when she played. Boe has started nine of Harvard’s first 13 contests—including all six Crimson matches against top-10 opponents.

“We didn’t get a chance to see Boe play much last year, because Jess [Ruddock] played in all the big games,” said junior winger Nicole Corriero. “I wasn’t surprised, but she’s definitely exceeded my expectations.”

Thus far in the season, Boe’s play has produced some remarkable stats. She leads the league in save percentage at .961, allowing only six goals while making 148 saves. She also holds the nation’s top spot for goals against average with a mark of 0.66 in 545 minutes of play. And only Minnesota’s goalie, Jody Horrick, joins Boe in the undefeated category.

To date, Boe has yet to lose a game while donning a Harvard uniform.

Attributing Harvard’s early success and its best start in program history in part to Boe is a huge understatement, though the goalie cannot bear all of the credit.

“Even the forwards are getting back and playing more defensive roles,” Boe said. “We’re focusing on only letting a team get one shot off and then getting control of the rebound.” Both of us [Boe and Vitt] know we need to stop the first shot and the defense will take care of the rest.”

Harvard’s defense has provided the consistency and skill necessary to keep both Boe and Vitt confident in goal. That confidence has translated into seven shutouts out of Harvard’s 12 wins.

“I think kids feel like they have a lot to prove,” Stone said of the team earlier this season. “It’s nice to have been able to have such a great experience from last year’s national championship, to say, ‘This is where you want to be. Now how are you going to get there, work back from that?’”

Boe’s experience as a back-up goalie last season has given her the perspective to realize the effort necessary to take a team to the Frozen Four. If she maintains her confidence and continues to play the way she has, Harvard’s dreams of another chance for the national championship are certain to become realities.

—Staff writer John R. Hein can be reached at hein@fas.harvard.edu.