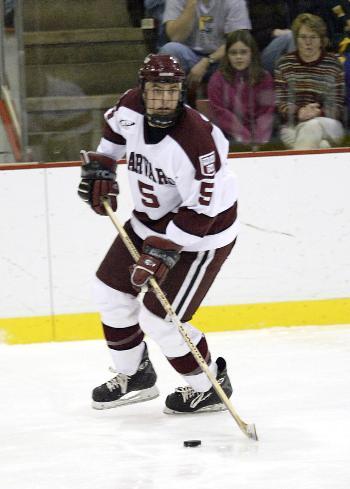 It’s payback time—though that’s what the Harvard men’s hockey team (6-5-1, 4-4-1 ECAC) has been telling Princeton for a number of years now. And as the Crimson travels down to New Jersey, memories of last month’s third-period collapse on home ice still bleed afresh.

Even more painful is the fact that, for the past five seasons, the squad has been unable to defeat Princeton on home ice. But tonight, the Ivy foes will face off in the Tigers’ Hobey Baker Rink, and Harvard is hungry for revenge.

If asked over the summer, one might have predicted that the Crimson would have no trouble dispatching Princeton (4-9-0, 4-6-0 ECAC) this season, home or away. Then again, one might have also expected the Crimson to be well above the .500 mark going into the winter break. And, of course, one would never have foreseen the sidelining injuries to senior blueliner Dave McCulloch, senior forward Kenny Turano and now-almost-recovered freshman defender Dylan Reese.

All in all, things have not gone quite to plan for Harvard this season; however, the squad can take a step in retaking control over its season against the Tigers.

“This is a new game,” admitted Princeton coach Len Quesnelle. “Harvard’s probably a little bit different of a team and so are we.”

The Crimson enters the matchup only three days removed from a convincing 5-3 defeat of No. 8 Massachusetts, a game in which 10 different Harvard skaters garnered a point or more. The win propelled the squad back over the .500 mark yet again, and it marked the second solid effort in as many games against a ranked opponent. But no matter where the Tigers stand in the rankings—usually towards the bottom—the team always manages to prove a troublesome foe for the Crimson.

Last month, in the most gut-wrenching Harvard loss of the season, Princeton tallied four goals in the final frame, effectively silencing the Bright Hockey Center crowd. Though Harvard had taken a 2-0 lead into the second intermission and killed off a 5-on-3 advantage early in the third period, sophomore goalie John Daigneau’s collapse and a number of missed scoring opportunities doomed the team.

“We were hanging around and hanging around,” Quesnelle said, “and we put together a good third period. I think if you ask [Harvard coach] Mark Mazzoleni, he probably felt as though his team didn’t play particularly well in the third period.”

“There’s no excuse,” said Harvard coach Mark Mazzoleni after the loss. “We have a veteran team…[we] should have the poise to put [the game] away.”

Princeton’s “hound-dog defense,” as Mazzoleni had earlier coined it, was a source of trouble for the Crimson, as the Tigers packed skaters back and managed to limit both Harvard’s puck movement and number of quality shots on goal.

Despite Princeton’s frustrating style of play, though, the game was the Crimson’s to lose, and the team did just that.

Harvard’s struggle with puck movement was evident, as a costly blueline turnover translated into a Tiger goal. Moreover, despite two shutout periods, Daigneau stopped just six of nine shots in the third frame, a ratio rarely printed under the winning team’s name.

As Quesnelle said, both teams have changed since the painful contest in Bright Hockey Center a month ago. Now protecting Harvard between the pipes is junior Dov Grumet-Morris, and the netminder has only raised his level of play in the last several weeks.

Currently ranked third in the nation with a .935 save percentage and fifth with a 1.80 goals allowed average, Grumet-Morris is among the premier D-I goalies.

However, Harvard’s inconsistency can be seen in Grumet-Morris’s win percentage, .550, which places the goaltender in 32nd place. But Grumet-Morris continues to gain recognition despite the poor record.

“He has the ability to make the first save, and he gives himself the chance to make the second save,” said Quesnelle. “He’s always in very good position.”

The Crimson is now hoping to put its season back in good position as well and, with a victory, enter the break with a slight but impressive two-game win streak.

For now, a rather large monkey sits upon the backs of the Crimson skaters and for his part, Mazzoleni is sick of answering the same question time and again.

“I’ll tell you,” he said, “every time we play Princeton, they outwork us.  They out-goaltend us.  They out-special-teams us. And then people go, ‘Why don’t you beat Princeton?’”

But if Harvard plays the same way it did last Saturday against the Minutemen, bringing the jam early and often, maybe Mazzoleni won’t have to explain his team’s collapses this time around.