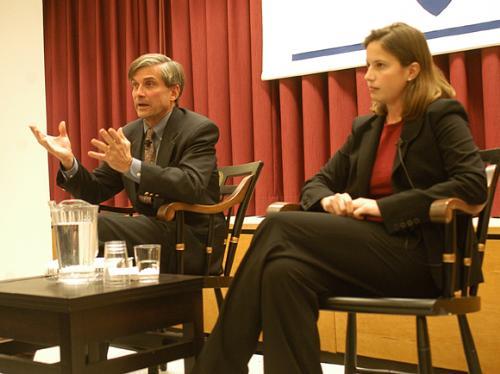 SARA LEVIN, a student at Harvard’s School of Public Health, speaks about her book on college athletics, Reclaiming the Game.
By William C. Marra, CONTRIBUTING WRITER

The cost to elite educational institutions of recruiting student-athletes is becoming more than those schools can bear, two speakers told a crowd at the Graduate School of Education’s Gutman Conference Center.

There is a growing divide—both academically and socially—between recruited athletes and the rest of the student body, according to Sarah A. Levin ’00 and William D. Adams, President of Colby College.

The book is a follow-up to The Game of Life: College Sports and Educational Values, which Bowen wrote with James L. Shulman.

Levin and Adams argued that recruited students face lower admissions standards, underperform once admitted and tend to isolate themselves on campus.

Levin pointed to statistical evidence from the second book to support her claim that athletic recruits—those included on lists coaches present to the admissions office—face lower admission standards.

“Your chances of getting into the Ivies go up as your SATs go up, but at every level there’s a substantial advantage if you’re listed by a coach,” said Levin.

The statistics reveal not only lower admissions standards but underperformance by student-athletes once they are on campus, Levin said.

Recruits for “high-profile sports”—men’s football, basketball, and ice hockey—perform especially poorly, on average placing in the 19th percentile of the class, she said.

Levin sourced the problem to “the recruitment process, not...the time commitment required for a sport,” noting that recruited athletes underperform academically even during the off-season and in instances when they have stopped playing their sport altogether.

While Levin presented statistical evidence to establish her claim, Adams spoke to the nature of the problem and how it might be remedied.

“We have seen in this country the growing professionalization of collegiate sports for at least the last three decades,” he said.

The solution lies in eliminating the “competitive and commercial” pressures that affect athletes and coaches alike, he said.

Adams said that while in the past Ivy League and other elite institutions have been relatively immune to the effects of such pressures, this is no longer the case.

“Those pressures have insinuated themselves into settings where we are surprised to see their effects,” he said.

The academic performance of student-athletes, their social experience, and most worrisomely the admissions standards at Ivies have all been adversely affected by these increased pressures, and have led to a “divide” between the goals of athletics and the purpose of the institution, Adams said.

Due in large part to The Game of Life, the Ivy League has recently enacted reforms to its policy on athletic recruitment, Levin said.

Within the past year, it has mandated that all student-athletes have seven weeks off from training during the academic year, it has lowered the number of annual football recruits from 35 to 30 students, and it has extended the academic index—which requires recruits to have a certain level of academic qualification—to cover more sports.

Not surprisingly, members of Harvard’s athletic community have met the scrutiny with skepticism.

“I think it’s a shame that people come out with this stuff, because I don’t think they understand what goes on day-to-day here at Harvard and the great value that athletics plays in the lives of people here,” said Assistant Baseball Coach Matt Hyde.

Hyde also took issue with the idea that a lower GPA means an athlete is “underperforming.”

“These kids here at Harvard come out of here with a sense that they can do whatever they want to do. They have great confidence going out into the job market,” he said of his current players, as opposed to those he used to coach at the University of Michigan.

He added that Harvard athletics could not function with fewer recruits.

“We’d be in deep, deep trouble” if the baseball program were not allowed to recruit the seven athletes it gets annually, he said. “If we were just getting regular applicants and walk-ons, we wouldn’t be able to go out there and compete and win.”

Levin concluded her remarks by noting that she wants the recruiting process to be changed—not scrapped.

“The question is, can we get rid of some of the costs without losing the benefits?” she said. “And that’s what we mean when we say Reclaiming the Game.”