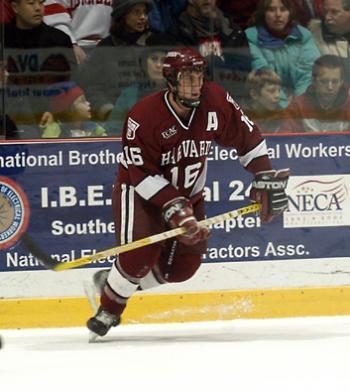 Assistant captain TYLER KOLARIK (16) notched six power-play goals last year, but hasn’t been able to score on the man advantage this year.
By Jon PAUL Morosi, SPECIAL TO THE CRIMSON

ITHACA, N.Y.—In what has become a telltale sign of Harvard’s mediocre start, Saturday night’s 1-0 loss at Cornell marked the fifth time this season in which the Crimson has scored fewer power-play goals than its opponent.

Harvard is 1-3-1 in those games, as compared with 3-1-0 when it has scored more goals on the man advantage. The loss at Lynah Rink marked the second time in three games that Harvard went 0-for-6 on the power play.

Meanwhile, Cornell scored once in its three chances.

The team’s power-play ills began in the season-opening loss to Brown and have quickly turned into an epidemic. Harvard is only 7-for-41 on the power play this season, sixth-best in the ECAC. Last season, it was a league-leading 37-for-156 (23.7 percent).

Harvard’s biggest problem against the Big Red was that less than half of its 45 shots made it to the net. Cornell blocked 14, many coming on Harvard power plays.

“We’re having a lot of issues with getting our shots blocked,” senior winger Tim Pettit said. “I don’t know if we’re not waiting for the guy to get out of the shot lane or if we’re not shooting the puck quickly [enough].

“It’s going to be a matter of moving our feet more on the power play and not just having guys stay in position.”

The players on this year’s first power-play unit—Pettit, junior Tom Cavanagh, senior Tyler Kolarik, senior Dennis Packard and junior Noah Welch—combined for 19 man-up goals one year ago, even though neither Cavanagh nor Packard saw regular time on the first unit. Pettit had seven power-play goals. Kolarik has six, and Welch has two.

This season, Cavanagh has two power-play goals. Packard has one. Pettit, Kolarik and Welch have zero.

Without graduated seniors Dominic Moore ’03 (10 power-play goals) and Brett Nowak ’03 (two), Pettit and Welch have drawn the attention of penalty kills this year—including Cornell’s—and haven’t yet been able to produce.

“Pettit and Welch shoot the puck so well that we knew we had to take those guys away,” said Big Red coach Mike Schafer. “There were some big blocked shots out there.”

That wasn’t Harvard’s only problem. Often, it couldn’t maintain possession in the Cornell zone long enough to establish its set.

Harvard’s most frustrating power play came in the third period, after Cornell’s Shane Hynes scored at 5:09. Chris Abbott went off for tripping 29 seconds later, but the only shot on goal during the ensuing power play came from Abbott’s twin brother Cam, who stole a pass from Pettit to Welch and had his breakaway chance turned aside by Harvard junior goaltender Dov Grumet-Morris.

“Everyone’s trying to make a big play, and we made a lot of turnovers,” Pettit said. “They probably ended up with more chances than we did.”

Friday night against Colgate, Harvard had the edge in special teams, with two power-play goals to the Raiders’ one. The first came from Cavanagh on a deflection by Colgate’s Joey Mormina. The second was scored by sophomore Dan Murphy on what Mazzoleni called a “phantom power-play goal” because it came with only three seconds left in Mormina’s charging minor and neither power-play unit on the ice.

So, when Mazzoleni was asked after Friday’s game if he thought the power play had improved, his response was a simple “No.”

Saturday certainly didn’t do much to change his mind.

Already hampered by injuries to senior winger Kenny Turano (ankle), senior defenseman David McCulloch (ankle) and freshman defenseman Dylan Reese (back), Harvard was dealt another blow Friday night when freshman standout Steve Mandes took a hit from behind that kept him out of Saturday’s game.

It couldn’t have come at a worse time—for Mandes or his team. After a notable first month that included four assists and Kolarik-like tenacity on the forecheck and penalty kill, Mandes earned a promotion to the top line.

He looked comfortable as the team’s first-line right wing, but the injury kept him from having the experience of playing at Cornell’s raucous Lynah Rink.

“It was tough to see Stevie not playing tonight,” Packard said. “He’s been doing great for us.”

Junior Rob Flynn took his place alongside Cavanagh and Packard.

If Mandes and Reese are not able to return in time for Wednesday’s game at Boston College, Mazzoleni will have only 18 skaters with varsity experience to choose from (for 18 spots in the lineup).

His next options, freshman forward Brendan Byrne and sophomore defenseman James Cleary, have never dressed for a varsity game.

The ritual fish toss as Harvard skated out for warm-ups was tamer—and cuddlier—than it had been in years past. Upon the request of Schafer and athletic department officials, many fans instead threw stuffed animals as part of a holiday toy drive for underprivileged children.

By rough count, there were about 100 stuffed cats and dogs, and maybe two dozen fish—not counting the several packages worth of Swedish fish that also made their way over the boards.

It took Lynah workers about four minutes to clean it all up.

A curious addition to the toy frenzy was a foot-long massager. The male worker who picked it up looked a bit uneasy.

Harvard is now 1-1-0 this season when Mazzoleni wears a sweater vest, as he did for this weekend’s games.

—Staff writer Jon Paul Morosi can be reached at morosi@fas.harvard.edu.