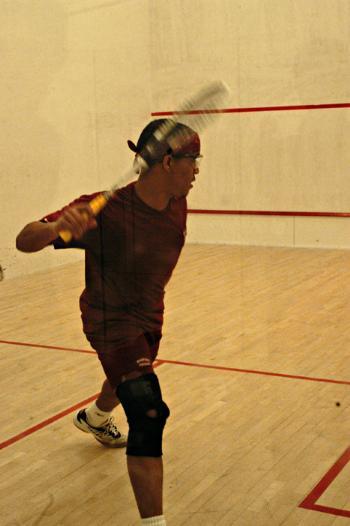 Co-captain and intercollegiate No. 8 JAMES BULLOCK recorded a 9-0, 9-0, 9-2 victory over Ben Bernstein in No. 3 Harvard’s 9-0 blanking of No. 5 Cornell in the Crimson’s home opener on Saturday.
By David H. Stearns, CONTRIBUTING WRITER

It’s getting to be a little bit too easy for the No. 3 Harvard men’s squash team. For the second straight match, the Crimson (2-0, 2-0 Ivy) obliterated its opponent, beating No. 5 Cornell 9-0 on Saturday afternoon.

Following up its Nov. 21 beating of Brown, Harvard once again showed its dominance over a weaker Ivy foe. The Big Red (2-2, 1-2)—not known for its squash excellence—never mounted a serious challenge against the Crimson, managing to win only two games throughout the entire match.

“What we wanted for all the guys to do today was go and take this match seriously,” co-captain and intercollegiate No. 8 James Bullock said. “It’s our first home game, so it’s nice to get a good start to our season at home.”

The most competitive match came at the No. 9 spot. With the rest of the day’s action complete, both teams crowded around the court to watch senior Gaurav Yadav play a five-game thriller against Cornell’s Geoff Fong.

Yadav experimented with some new strategies through the first three games and found himself facing a 2-1 deficit heading into the fourth game after dropping the first two games Harvard had lost all season. But halfway through the fourth game, Yadav picked up his play and squeezed out a 9-7 victory to push the match to a deciding fifth game.

In that game, Yadav took command. With both players fatigued, Yadav controlled the middle of the court and forced Fong to expend energy chasing down balls in the corners. Fong, visibly exhausted, often bent over or leaned against the back wall between points in order to catch his breath. Meanwhile, Yadav just got stronger as he closed in on victory, eventually taking the match with an impressive 9-0 win in the fifth game.

“When I was down 2-1, I [was making] a lot of errors,” Yadav said. “The shots were on but they weren’t falling in the right place. And in the final game the same shots I had been playing all game all fell.”

The Crimson won the other eight matches in three games.

At the No. 1 spot, freshman Ilan Oren cruised to a two-game lead, winning 9-4 and 9-5. But in the third game, Big Red captain and intercollegiate No. 9 Matthew Serediak jumped out to an 8-2 lead after some sloppy play by Oren.

With Serediak serving for the game, Oren began a comeback that would see him take seven straight points and eventually close out Serediak 10-9.

“When he got up 8-2, I was missing easy shots,” Oren said. “As soon as he got to eight, I began getting them in…It was pretty pleasing to come back.”

Two of Harvard’s top players, sophomore intercollegiate No. 6 Will Broadbent and freshman Siddharth Suchde, did not play due to injuries. Broadbent is still sidelined with patella tendonitis and Suchde was resting a sore hamstring in preparation for next month’s Scottish Open.