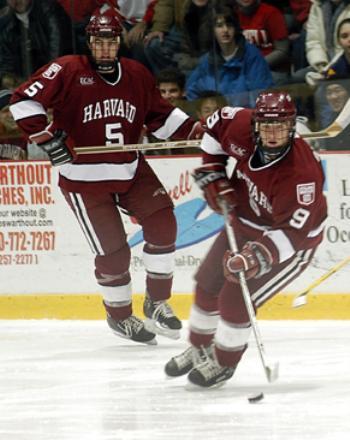 Junior center TOM CAVANAGH (9) registered a hat trick against Colgate on Friday night, but failure to convert on the power play on Saturday night proved costly as the Harvard men's hockey team lost to Cornell 1-0.
By Timothy M. Mcdonald, Special to the Crimson

ITHACA, N.Y.—The Harvard men’s hockey team’s hopes for a weekend sweep of Cornell and Colgate died amidst a sea of cheering and jeering red Saturday night, as the Crimson fell to the Big Red 1-0.

The loss dropped Harvard (5-4-1, 4-4-1 ECAC) into a tie for fourth place in the ECAC and sounded a sour note at the start of a eight-day stretch that sees the Crimson skate at No. 2 Boston College on Wednesday and in Bright Hockey Center against No. 9 Massachusetts Saturday.

Winless on its home ice of Lynah Rink this season and coming off a tough tie with Brown, the Big Red (4-2-5, 4-0-2) and the Crimson were deadlocked for the first forty minutes on Saturday night, largely on the strength of superb goaltending on both sides.

Across the ice, the Crimson’s crease was covered exceptionally well by junior goaltender Dov Grumet-Morris. Playing perhaps his finest game in a Harvard sweater, Grumet-Morris stopped all but one of the 24 shots directed at him.

So, with two poised goalies negating any attempts at offense, the game headed into the third period knotted at zero.

“You just had the feeling going into the third that the next goal was going to win it,” Cornell coach Mike Schafer said.

Schafer’s words were entirely accurate, although Harvard coach Mark Mazzoleni saw another reason for the Crimson’s loss in the last 20 minutes.

“Both goaltenders played outstanding,” he said. “The difference was they beat us on the specialty teams.”

Mazzoleni’s indictment held on both ends of the ice. The game’s only goal came when Cornell was on the man-advantage, playing up because junior center Brendan Bernakevitch had been whistled off for interference 4:48 into the third. The Big Red wasted little time, converting 21 seconds into the power play when a hard shot from point-blank range off the stick of Shane Hynes found its way past both the confusion in front of the crease and Grumet-Morris, sliding into the back of the net and giving Cornell a 1-0 lead.

That was the game’s only score, in large part because of the Crimson’s own failure when playing up a man. Harvard had a half-dozen power plays on the night, and it came up empty all six times.

That failure to convert was the difference, in Mazzoleni’s mind.

Harvard’s loss meant that another fine performance from Grumet-Morris was wasted. Improving on his previous night’s success against Colgate, Grumet-Morris stopped a number of close chances, including an odd-man break by Big Red winger Cam Abbott midway through the third period.

Despite its lack of offensive fireworks, the game was another classic contest in the repertoire of great games in this historic rivalry.

Having been a part of Harvard-Cornell clashes as both a player and a coach, the energy and intensity of those games is something Schafer appreciates regardless of the game’s final outcome.

“These two teams never seem to let the media, the fans, anybody down with how hard they compete against each other,” Schafer said.

With the two teams evenly matched for much of the first two periods, the Crimson finally pulled away from Colgate in the third, largely on the strength of two great individual efforts from junior center Tom Cavanagh and Grumet-Morris.

Cavanagh tallied his second and third goals of the night in the final frame, while Grumet-Morris came up with several big stops to seal the Harvard win.

The Crimson and the Raiders traded goals over the first two periods, with Colgate notching one power-play goal and Harvard scoring two, one from Cavanagh that deflected off the skates of Colgate’s Joey Mormina and into the net and the other off a tip in front of the net by sophomore forward Dan Murphy.

“Penalties clearly hurt us tonight,” Colgate coach Stan Moore said. “We spent a lot of manpower to kill off a lot of penalties.”

The highlight of the night—and the eventual game-winner—came on Cavanagh’s second goal at 9:19 of the third. Skating along the right-side boards in the Raiders’ zone, Cavanagh had senior winger Dennis Packard on his left and three Colgate defenders in front of him. His beautiful skating split the defenders and he flicked a swift shot by Colgate netminder Steve Silverthorn, giving Harvard the 3-2 lead.

“We had a little hiccup on a two-on-three that led to a Harvard goal,” Moore said.

With all due respect to Moore, Cavanagh’s goal was as pretty a play as can be seen in college hockey, and the eventual game-winning goal was due more to a supreme individual effort than to a defensive-zone miscue.

But Cavanagh’s third-period contributions were only important because of the outstanding play of Grumet-Morris. Despite allowing goals in the first and second period, Grumet-Morris kept Harvard in the game. The most prominent example came off of an unlucky bounce of the puck, as Colgate’s Kyle Wilson—emerging from the penalty box—had the puck drop into his lap just outside the Harvard zone.

“Unfortunately, [Doyle] just picked it up right as the penalty expired and dumped it to the neutral zone,” Grumet-Morris said. “I was just trying to get out there and challenge him, because he didn’t have as much speed as I think he wanted. So he was going to have to take the shot, and luckily I was able to make the save.”

He made that save and 25 others to keep the Crimson around long enough for Cavanagh to put the game safely out of reach. And while Harvard may have felt that the game was a little closer than it should have been, the win against Colgate was a positive start to the road trip, according to Grumet-Morris.