A Fighting Chance for Quad’s Celeris 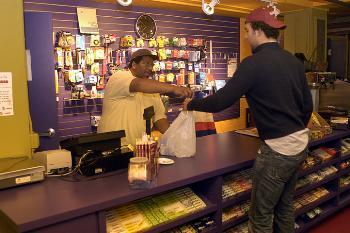 Celeris has gotten a new lease on life.

Annual losses of about $25,000 threaten to close the convenient store housed in Cabot basement, but students were told last week that if they can make Celeris break even next semester they will have saved their store.

“[The students] are hopeful, and I’m fine with that,” said Ted A. Mayer, Harvard University Dining Services (HUDS) executive director. “I think it takes students to really motivate other students.”

He also said that HUDS would not count the losses already incurred this year against students’ target.

Alejandro B. Fernandez ’04, one of five students who are working to save the store, said Celeris would be able to stay afloat if it drew 13 to 14 percent of the Quad population daily.

Celeris currently gets about 75 customers per night—a number that needs to at least double in order for the store to break even, Mayer said.

The students involved in keeping Celeris open have already added tables to the store to make it more social, said Fernandez.

Next, he said they want to conduct an online survey to assess the store’s customer base and most popular hours.

Fernandez said the students were also looking into cutting back the store’s hours because labor is Celeris’ biggest expense. According to the Cabot website, the store is open every night from 6 p.m. to 1 a.m. Union regulations require at least four-hour shifts for workers, according to Fernandez.

Dina B. Marsh ’06, another student working to keep Celeris’ doors open, said she hopes to attract more students from Currier and Pforzheimer Houses.

The students plan to advertise on shuttles and in student mailboxes, Fernandez said.

“We are going to try to support whatever they come up with, with marketing support,” she said.

Celeris was opened two years ago for Quad residents who felt that they had less access to amenities than students living elsewhere. News of Celeris’ potential closure sparked debate on the Cabot-open list.

“There is a small group of very loyal customers there who think it really adds a lot to the Quad,” said Mayer.

For many of its customers, Celeris is a convenient and safe night-time option.

“Some people voice the concern of safety,” said Fernandez. “Not having something there is going to mean that we’re going to have to walk further at night.”