DNA technology makes a new use for old specimens 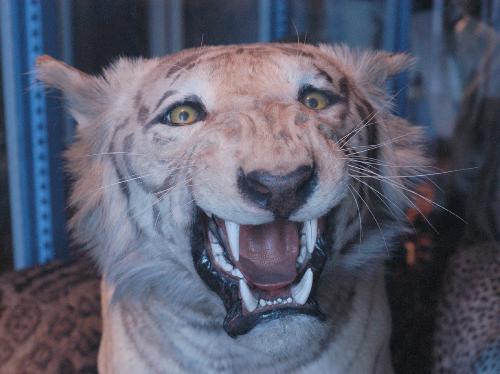 Harvard’s Museum of Natural History is using new technology to make specimens collected over the past 150 years relevant to modern science.
By Ben A. Black, Crimson Staff Writer

Hidden away in the Harvard Museum of Natural History—past a case full of George Washington’s stuffed pheasants and a sperm whale skeleton—is a 30-year veteran of the museum who has witnessed a revolution in its work.

Professor of Biology Kenneth J. Boss, who curates Harvard’s million-strong mollusk collection, laughs when he gives directions to his office based on mounted skeletons.

“Anybody at Harvard who misses a sperm whale doesn’t belong at Harvard,” Boss says.

The office itself is full of maps to help him organize specimens and plot expeditions. Every horizontal surface is stacked high with scientific articles, papers and photographs.

Boss, who will be retiring next year after more than 30 years at Harvard, leads the way out of his office and into a tangled warren of wooden cabinets, each of which contains thousands of shells.

“I don’t know how many specimens are in that drawer, but lots,” Boss says. “No one would be foolish enough to try to count the total number of specimens here. It’s easy to get into the millions.” As he speaks, he touches a padded case holding a few tiny Atlantic abalone shells. “These are rare, very hard to get,” Boss says.

But these days, few people come to see the shells. With the rise of molecular biology, the old-fashioned comparison of dead specimens is done less and less.

This reality has forced the museum to go beyond bottling frogs and stuffing birds. Researchers at the museum now take DNA from specimens and posts catalogues of its collections to the Internet to keep itself relevant to contemporary biology.

But at the museum, things move slowly.

“This is a museum of a museum,” Boss says. “We have the same display cases as a hundred years ago, the same specimens. If you look at it, you can still see the remnants of art nouveau in the ironworks. This is not a modern museum.”

The Museum of Comparative Zoology (MCZ), one of the three museums composing the Museum of Natural History, includes most of the university’s biological specimens.

The MCZ was founded in 1859—the same year that Charles Darwin published The Origin of Species—by Harvard professor Louis Agassiz, who stridently rejected Darwin’s theory of evolution.

According to Alexander Agassiz Professor of Zoology James Hanken, director of the MCZ and curator of the herpetology collection, Agassiz’s views had a large impact on the original work of the museum.

“Louis Agassiz went to his grave trying to refute evolution,” Hanken says. “That’s why he amassed these huge collections. Through many of the early years of this museum, the main objectives were just to describe and categorize life on earth and to test Darwin’s theory of evolution.”

Although evolution is now a central tenet of biology, some aspects of the museum’s mission have remained constant since its establishment, according to Hansen.

“Even in the nineteenth century, there was a sense that the world was changing,” Hanken says. “A lot of natural history museums were created to collect information about animals and plants before they disappeared.”

This role is central to the concept of a collection, according to Hanken. He does concede, however, that there was a period when museums no longer seemed as relevant to scientific research.

“Thirty to forty years ago there was a sense, a false sense, that we knew all the organisms on our planet, and there would be no further role for natural history museums beyond libraries,” Hanken says. “This has not proven to be case.”

According to Hanken and his colleagues at the museum, the collections are undergoing a rebirth.

New DNA sampling technology and the Internet have allowed natural history museums to re-invent their relationship with the scientific community.

DNA from collections can be used to study organisms hard to access in the wild, uncovering their evolutionary patterns and the genetic variations of their populations at times in the past. This resurgence in the importance of collections has particularly profound implications at a place like Harvard.

From Frogs to DNA

The MCZ is applying the new science of DNA to gain insight into old specimens, according to Hanken.

“What you have in a collection is millions of dead animals, preserved for longterm use,” Hanken says. “These collections were made before molecular biology was born. The techniques of molecular biology allow us to go back to preserved specimens and pull out DNA from extinct organisms and endangered species.”

Because the information available in collections frequently can’t be found anywhere else, Hanken says he has found himself the keeper of key records in the global conservation effort.

“In the worldwide biodiversity crisis, with species disappearing, natural history museums represent historical records of distribution and abundance,” Hanken says. “We’re getting calls for information from countries all over the world.”

The demand for information has helped inspire the use of the Internet to disseminate information about Harvard’s collections.

This modern technology is meshing with some of the most time-tested scientific methods.

Along with harboring a large number of benchmark specimens—those by which whole species are defined—Harvard’s collections are some of the world’s biggest and most important.

In addition to Boss’s mollusk collection, there are 11 other departments in the MCZ, ranging from vertebrate paleontology to icthyology, the study of fish.

The ant collection, built up by Pellegrino University Professor Emeritus Edward O. Wilson, is touted as the largest and most significant gathering of ants in the world.

The Department of Entomology alone has more than seven million specimens. Many of the species represented in the museum are now extinct—from dodos to dinosaurs.

But museum is still searching for new specimens.

The museum is sending Shi-Tong T. Hsieh, a fourth-year graduate student in the Department of Organismic and Evolutionary Biology, to Guam to study and collect fish.

Hsieh studies the effects of skin surfaces on locomotion. She has used the collection to study a species of lizard that can that run on water. Now, she is looking at a “very acrobatic, energetic” fish from Guam that spends 90 percent of its life out of the water.

According to Hsieh, there are still “large gaps” in Harvard’s collections—one of which she will fill during her trip to Guam.

“When you take an animal and you stick it in a collection, you don’t just have a dead animal lying around,” Hsieh says. “We loan them out, do a lot of anatomical descriptions, research, phylogenetics and figuring out how different species are related.”

In the future, Hsieh says she sees even broader uses for museums and their collections.

“You can go into a collection now and pull a specimen that was collected back in the 1800s off the shelf, and pull out stomach contents to find out what it ate,” Hsieh says.

“With the current expansion of humans into everywhere in the world, collections are going to become more and more important in terms of conservation efforts,” she says.

—Staff writer Ben A. Black can be reached at bblack@fas.harvard.edu.