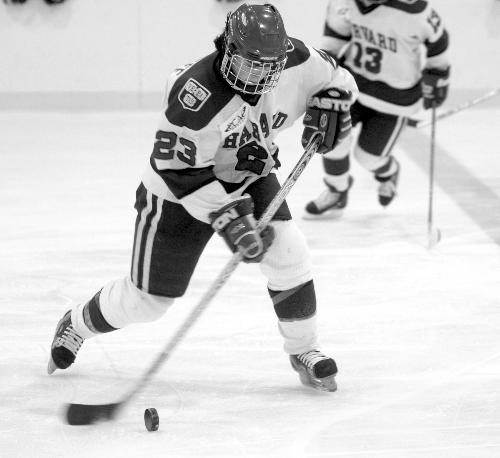 The Bright Hockey Center crowd came to its feet on Friday night as Harvard captain Jennifer Botterill claimed the all-time Division I women’s hockey scoring record with her 308th career point in the second period of the Crimson’s 4-1 victory over Princeton. Once Botterill saluted the fans at center ice, the game resumed as usual. Harvard coach Katey Stone, for one, was pleased to move on.

“I think it can be a burden,” Stone said of Botterill’s record. “She’s an incredibly selfless player, but when everyone else around you is reminding you of those things, it takes the focus off of team, and she’s all about team.”

Botterill has always kept the focus on the team regardless of her personal milestones, such as the all-time assist record, the single-game scoring record or college hockey’s longest point-scoring streak. Friday night was no different.

“It’s great, but I think it’s because I’m surrounded by such great people every day,” Botterill said in reference to the record.

“Tonight was a great team effort, and on all the goals, so many people contributed,” she said.

Botterill scored the game’s first goal—her 306th career point—six minutes into the game when she claimed the puck just outside the crease and cut across for the finish past Princeton goaltender Megan Van Beusekom. Botterill had room to work with because freshman Julie Chu had taken a shot from the opposite side and junior Lauren McAuliffe was entangled with the defender on Botterill’s side.

Botterill tied the scoring record, previously held by former Harvard linemate Tammy Shewchuk ’00-’01 with 307 points, when she retrieved the puck off a Ruggiero slapshot and fed Chu in front for the Crimson’s second goal.

On the record-breaking score 2:39 into the second period, captain Angela Ruggiero unleashed a long shot from the blue line and Botterill one-timed the long rebound into the Princeton goal.

Unlike some of her previous records, Botterill knew full well when this milestone was upon her. Her achievement was announced over the Bright sound system and a banner with the number 308 was hung from the press box. The crowd cheered and Botterill politely raised her stick in acknowledgement.

While many different people contributed to the goals, Botterill touched on all four, including the last goal with 2:10 left when she set up McAuliffe in the slot.

After the game, Stone acknowledged that Botterill is the most complete player she has ever seen and praised her consistent effort every night, her commitment to preparation and discipline.

“It’s been fun to watch Jen grow up right in front of me and see her learn to become a complete player,” Stone said. “She’s the epitome of excellence.”

Botterill credited her teammates, past and present, for her growth.

“I’ve learned so much from the people I’ve played with and the ones I’m playing with today,” she said.

Friday was the third time Stone had seen one of her players break Harvard’s all-time scoring record. A.J. Mleczko ’97-’99 was the first and Shewchuk was the second. Stone said that if she sees Botterill’s record fall, it will be good news because it will mean she still has a good team.

The win over the No. 10 Tigers extended Harvard’s current unbeaten streak to 20 games. Princeton rarely threatened to score due to the Crimson’s dominant forecheck. The Harvard defensive zone coverage prevented the Tigers from getting many quality shots, and when they did, junior goaltender Jessica Ruddock typically stopped them. Princeton’s lone goal came in the final two minutes when the game was well in hand.

“There were times when I thought we weren’t as strong with the puck as we should have been, but we made the most of our opportunities,” Stone said. “We played well in our defensive end. Our goaltender was very solid.”

Over 600 fans watched the Crimson victory. Among those in attendance was Harvard University President Lawrence H. Summers, who sat on the Crimson bench during the game and wore a red Harvard jersey.