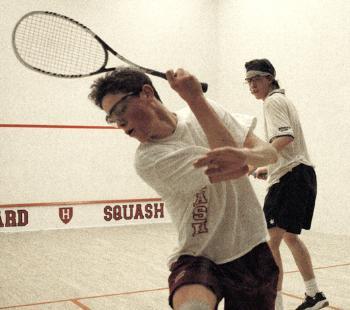 The Harvard men’s squash team ended its season this weekend at the College Squash Association Team Championships jointly hosted by Princeton and Penn. The fourth-seeded Crimson fell 8-1 to No. 1 Trinity in Saturday’s semifinals, but recovered to avenge Wednesday’s 5-4 loss to Yale with a 5-4 victory over the third-seeded Bulldogs in yesterday’s third place match.

Yesterday, co-captain No. 4 Dylan Patterson trailed 2-1 in the deciding match, but recovered to give the Crimson the victory and third place in the tournament.

On Wednesday, the Crimson had suffered a heartbreaking 5-4 loss to Yale, costing it second place in the Ivy League and the No. 3 seed in this weekend’s tournament. It was also Harvard’s first home loss to the Bulldogs since 1961.

But yesterday, inspired by Broadbent’s heroic effort the day before, the Crimson reversed Wednesday’s result to end its season on a winning note. Junior No. 2 James Bullock, sophomore No. 3 Michael Blumberg, Patterson and junior No. 5 Ziggy Whitman all repeated their victories from Wednesday, while sophomore No. 6 Asher Hochberg defeated Gavin Cumberbatch in five games to clinch the win after losing in the previous meeting.

Yale’s Josh Schwartz, who had fallen to Patterson at No. 4 on Wednesday, was sidelined by a hamstring injury, but the Bulldogs also curiously elevated Aftab Mathur over Chris Olsen for Saturday’s match.

“Their lineup’s kind of a mystery,” Patterson said.

Hochberg gave Harvard a boost in the first three matches, winning at the pivotal No. 6 position to give the Crimson a 2-1 lead.

But Yale recovered to even the score at four, with only Patterson and Mathur remaining on the court. Harvard assistant coach Mohammed Ayaz refused to tell Patterson the results of the other matches between games, but Patterson still guessed that he needed to win when he saw the crowd converge on his court.

Trailing 2-1 as Mathur used his height to stretch out for Patterson’s lobs and drop shots, Patterson abandoned his approach and adjusted his strategy to take advantage of his superior fitness. Attempting to increase the tempo of the game, Patterson hit the ball harder and lower to force Mathur into increased running.

The change proved effective, as Patterson, despite the pressure, took the fourth and fifth games, 9-2 and 9-4, to secure the victory and third place for the Crimson.

“If there was one person we would want playing the deciding match against Yale, it’d be Dylan,” Hochberg said. “He’s a senior, he’s experienced, it’s his last match and he’s extremely tough mentally.”

Saturday afternoon, Harvard dropped its first eight matches to Trinity, putting itself at risk of suffering its first 9-0 loss ever. In those eight matches, only No. 8 Gaurav Yadav even captured a game. Yadav was tied 1-1 with Pat Malloy, but fell 9-4, 4-9, 9-3, 9-5.

At No. 1, with the outcome of the match long since decided, Broadbent dropped the first game to Samper, 9-2, and it looked like the Crimson would be unable to avoid the shutout.

But Broadbent, who had lost 3-0 to Samper at the Price-Bullington Invitational in November, gained confidence in his ability to compete with Samper even in falling behind.

“I just wanted to hang with him in the first game,” Broadbent said. “I kind of weathered the storm a little bit.”

Before the second game, Harvard coach Satinder Bajwa reminded Broadbent that Samper would come up with lots of winners, but if Broadbent didn’t get frustrated and stayed in points, he would get opportunities in the front court.

Indeed, Broadbent slowed the game down to jar Samper out of his rhythm and began measuring his lengths.

“Once I started initiating the attack, fortunately I was playing some of my best squash all year, so I was able to keep the ball nice and tight up front—tight to the wall, tight to the tin,” Broadbent said.

“Broadbent was hitting shots that were so tight they were outright winners,” Patterson agreed.

Broadbent also remembered co-captain Thomas Storch’s advice to “play the opponent rather than just playing the ball,” meaning that Broadbent shouldn’t hit a shot—even a good one—if it played to his opponent’s strengths.

Instead, Broadbent began taking advantage of Samper’s backhand by keeping the ball against the backhand wall.

Broadbent’s tactics worked, as he won the next three games 9-3, 9-5, 9-3 to inspire his teammates for Sunday’s match.

The Crimson opened the weekend by cruising into the semifinals with a routine 8-1 victory over Western Ontario, a team it had handily defeated in an intersession scrimmage.

“He’s the resident beast of the team,” Yadav said. “He’s just a grinder.”

With Patterson’s win against Yale proving to be the deciding match and Storch’s advice to Broadbent figuring in the freshman’s win over Samper, Harvard’s co-captains demonstrated their leadership yet again in their final match with their squad.

“The degree to which they’ve focused on our team this entire year, the amount of energy and organization they’ve put in as captains, is impressive,” Whitman said.