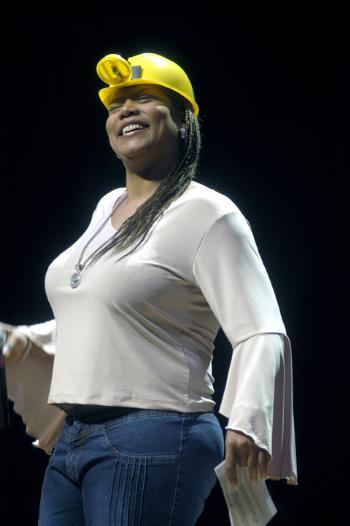 Queen Latifah received the royal treatment at Harvard Saturday, mingling with students at a Kirlkand House fete and later presiding over the 18th annual Cultural Rhythms show in Sanders Theatre.

The show, put on by the Harvard Foundation for Intercultural and Race Relations, featured over 30 student groups performing traditional Indian and Native American dances, gospel singing and other amusements.

Selected as the Foundation’s “Cultural Artist of the Year,” Queen Latifah made her grand appearance at Kirkland House wearing blue jeans, tinted aviator sunglasses and a beige blouse.

More than 100 eager students waited with cameras ready as the Harvard Band played during her entrance.

After the Foundation’s student interns led “her royal highness” to her seat, she gladly played the part of royalty. Interns performed skits for her, including a spoof of Queen Latifah’s latest movie “Chicago.”

Queen Latifah was then ushered to Sanders Theater in a white stretch limosine.

“Damn,” she exclaimed, looking around at the crowd. “This is going to be more fun than the Oscars.”

The show began with a colorful Mexican hat dance and a performance of the Philippine national dance using bamboo poles by the Harvard Philippine Forum Dance Troupe.

“They workin’ the bamboo poles.” said Queen Latifah after the performance. “That was hot. I need that for my next video.”

After watching the Harvard Vietnamese Association dancers dance to a northern Vietnamese folk song, she called the show “da bomb.”

Each act was accompanied by the presentation of a white rose to the Queen.

Following a brief intermission, Dean of the College Harry R. Lewis ’68 and Director of the Foundation S. Allen Counter presented Queen Latifah with an honorary plaque.

The Dean praised Queen Latifah for “her artistry, her sportsmanship” and her contributions “as a humanitarian.”

“This is big,” said Queen Latifah upon accepting the plaque. “This will look really nice in my house.”

Queen Latifah lauded the diversity of the performers, and mentioned her own multicultural upbringing.

“If we could let these performers rule the world, we wouldn’t be at war right now,” she said as the audience cheered in agreement.

When the show ended, she left the stage giving peace-signs and waving.

Later, she said the experience had enhanced her impression of Harvard.

“Everyone had uniquely strong things to offer,” she said. “They were all A-pluses.”

Queen Latifah said her favorite performance was the dance by Baile-Nritya, which combined a flamenco dance from Spain with the Kathak dance of northern India.

“I thought that was really sexy,” she said.

Counter also expressed his satisfaction with the show’s outcome.

“She was the best guest of honor we’ve ever had,” he said.

He also hinted at the possibility of future appearances of the Queen at Harvard.

“How does Professor Queen Latifah sound?” he asked.