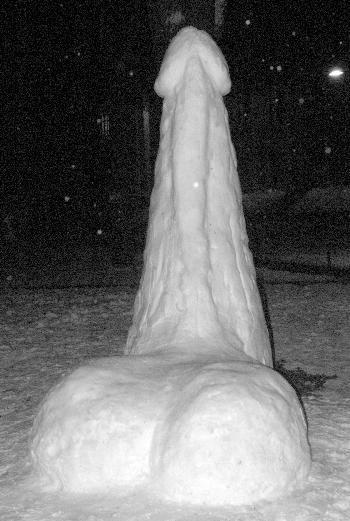 A snow sculpture, iced to prevent shrinking, was built in the Tercentary Theater on the night of Monday, February 10, 2003.
By Hana R. Alberts, Crimson Staff Writer

When a few members of the Harvard crew team decided to build a snowy representation of the male anatomy on Feb. 11, they never imagined it would be so hard to keep it up.

The 9-foot snow phallus, constructed in Tercentenary Theater, was torn down just hours after its erection.

But its impression still sparked an intense debate, from dining halls to dorm rooms, over the appropriateness of public displays of genitalia.

Even The Economist magazine weighed in on the discussion, offering the destruction of the sculpture as evidence of American prudishness on its usually staid pages.

But women’s groups on campus have led a chorus of complaints against the snow penis, arguing that such a display is demeaning to women.

“It was offensive because it was pornographic,” said Amy E. Keel ’04, who said she and her roommate “dismantled” the giant snow penis.

“As a feminist, pornography is degrading to women and creates a violent atmosphere,” she said.

Keel said that her personal experience as a rape survivor makes this statue even more uncomfortable to observe.

“Men think they have the right to force that on you,” she said. “It’s a logical extension.”

Furthermore, Keel claims that she and her roommate were verbally and physically harassed by a group of roughly 25 men when they attempted to tear down the statue with a cardboard tube at 1:30 a.m. the morning after it was built.

“A few people came out and crowded me with their bodies and one person shoved me away from the penis,” she said. “It was gendered violence, because [their comments] were said in the context of our gender and accompanied by aggressive actions toward us.”

Though Keel assumed some of her harassers were among the creators of the statue, she said she could not identify any of the men.

And crew team captain Michael J. Skey ’04 denies that he or any of the other makers of the statue had been involved in the incident. According to Spey, the group left the Yard over three hours before Keel and her roommate tried to take down the snow phallus.

But regardless of the alleged circumstances surrounding the snow penis’ downfall, a controversy over the meaning of the statue lingers.

Women’s Studies Lecturer Diane L. Rosenfeld, who teaches Women, Violence and the Law this semester, said that the implications of the snow phallus go beyond the legitimacy of the statue’s presence.

“The ice sculpture was erected in a public space, one that should be free from menacing reminders of women’s sexual vulnerability,” Rosenfeld wrote in an e-mail yesterday.

She said the snow penis follows a long line of public phallic symbols, including the Washington Monument and missiles.

“Women do not need to be reminded of the power of the symbol of the male genitalia,” Rosenfeld said. “My guess is that they are constantly reminded of it in daily messages.”

A discussion about feminist perspectives on the statue, sponsored by the Radcliffe Union of Students, will take place Tuesday night in the Adams House small dining room.

But the makers of the statue said they intended to build the snow penis as a simple joke.

Skey said he came up with the idea to allow a few members of the team to “hang out together” outside of practice.

“We built it for fun, instead of building a snowman,” he said. “We built it specifically as a junior high prank.”

“Once it turned around into a huge sexism debate, it was like a giant keg of gunpowder waiting for a spark,” Skey said.

In spite of Skey’s intentions, Keel said she was offended by the joke.

“I have a right to speak out against the joke,” Keel said. “I criticize the motives of putting it up, but since they did, it is within my rights to put it down. It goes both ways.”

Skey said he agreed Keel did not do anything wrong by knocking down the statue.

“If people found it obscene, they had a right to rip it down,” he said. “That’s perfectly true.”

But Skey said he thinks that at a school like Harvard, jokes can be blown out of proportion.