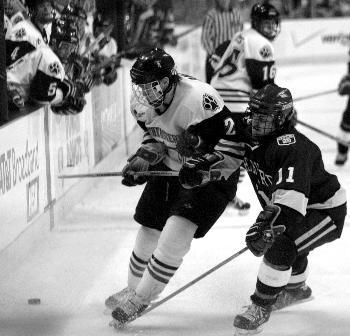 Junior forward TIM PETTIT, shown here in earlier action, registered three assists and a goal for the weekend.
By Timothy M. Mcdonald, Special to the Crimson

Burlington, Vt.—Saturday night’s game against Vermont mirrored the Crimson’s contest against Dartmouth the night before—almost. For a single period, the Harvard men’s hockey team dominated Vermont (11-16-3, 8-23-0 ECAC). After that, things got a little too interesting before captain Dominic Moore shut the door on a Catamount comeback and the Crimson clinched a 5-2 win.

Harvard (18-8-1, 16-4-0) relied on its superior special teams, which produced the first two goals in its victory over Dartmouth, to take a 2-0 lead before nine minutes had passed in the first.

On the penalty kill after an interference call against sophomore Rob Flynn, junior winger Rob Fried intercepted a pass and was off on a break with linemate Aaron Kim. Fried faked his defender down and fired a shot, which was saved by Vermont goaltender Shawn Conschafter. But both Fried and Kim charged the net hard, and amidst the mass of bodies in front, Kim poked home the first goal of the game.

Two minutes and 20 seconds later, Harvard’s special teams again lit up the red light. Working on an abbreviated 5-on-3, the Crimson set up in the Catamount end and methodically moved the puck around, probing for an opening to fire away at Conschafter. Moore found junior forward Tim Pettit with just such an opening, but Conschafter made the stop. Senior forward Brett Nowak and junior forward Tyler Kolarik were positioned around the crease, and Nowak sent the loose puck into goal before the Vermont defenders could get a body on him.

“When we get the puck deep into [Vermont’s] zone, we’ve had a lot of success against them,” said Harvard coach Mark Mazzoleni. “We were able to do that in the first period, and we were opportunistic on the power play.”

In contrast, Vermont squandered a great chance of its own with less than a minute to play in the first. While on the power play, the Catamounts were applying strong pressure to Harvard goaltender Dov Grumet-Morris and looked primed to score. In fact, the puck did cross the Harvard goal line, but the score was called off because of a slash from assistant captain Ryan Miller along the boards. It was a costly mistake, but Vermont would have other close calls over the next 40 minutes.

“We didn’t skate at all in the first, and we did a lot of good stuff in the second and third,” said Vermont coach Mike Gilligan. “I thought we really played well enough to tie it up in the third.”

The Catamounts were in a position to knot the score in the third, thanks to a strong offensive attack in the second. Despite an unassisted goal by sophomore Tom Cavanagh, shooting three times and collecting his own rebounds, at 2:09 of the second, Vermont controlled the play.

On its seventh power play of the game, the Catamounts finally cracked the Crimson’s penalty killers, though an odd bounce aided them. Sophomore forward Scoot Mifsud took a shot from the point that missed the net entirely, hit the back boards and ricocheted out to a waiting John Longo. Longo didn’t hesitate and fired a shot which Grumet-Morris managed to reach with his pads but could not stop.

Having finally cracked the scoreboard, the Cats took further control of the game, pressing Harvard with fast breaks and a more cohesive offensive effort than the Crimson saw in the first. Vermont’s second goal of the game came off a 2-on-1 break with the leading scorer, junior Jeff Miles, skating up the left side with the puck.

“[Miles] came down with the puck on his off-wing, so I was waiting for him to either shoot far side or cut in and then try to go back short side,” Grumet-Morris said. “He took a nice, hard wrister low inside the post and he beat me. And a goal-scorer scores that goal.”

Despite being beaten clean on that occasion, Grumet-Morris had a stellar weekend, allowing three goals and making 60 saves on 63 shots to pad his already impressive stats.

“Our defense did a very good job of keeping everything to the perimeter, which makes a goalie’s job easier,” Grumet-Morris said.

Only 54 seconds into the third period, however, Grumet-Morris’ defense made his work significantly more complicated. Junior defenseman Kenny Smith was called for taking down Mifsud as he skated in on a break away towards the Harvard goal. A penalty shot was called, and Mifsud skated in towards Grumet-Morris.

“On the penalty shot, I tried to come out as far as I could and just be mindful of the first shot,” Grumet-Morris said.

And the first shot was all Mifsud got off. He didn’t try a fake and Grumet-Morris stuffed his attempt at going five-hole.

Vermont would have other quality scoring chances, but Grumet-Morris and the Harvard defense, playing a conservative game, stopped them all.

“I thought we were composed and really battled hard in the third,” Mazzoleni said

That composure helped maintain a slim Crimson lead, despite missing sophomore defenseman Ryan Lannon for most of the game, and Kolarik later on with a badly banged knee. Those losses forced Mazzoleni to shuffle his lines, and gave a fresh-legs advantage to the fast-skating Catamounts.

Clinging to a 3-2 lead with under two minutes to go, Gilligan pulled Conschafter in favor of an extra skater on a faceoff. That backfired, however, as Moore made a tremendous play to ice the game, intercepting a pass on the forecheck and notching an empty net goal.

“It was an unbelievable interception, cross ice—it was a gun coming across the ice,” Gilligan said.

Pettit added another empty-netter a minute later, making the final score 5-2, and ending a road trip sweep for Harvard.

“You come into anyone’s building—like Dartmouth and Vermont—and come out with two victories, it’s a very big weekend for us,” Mazzoleni said.