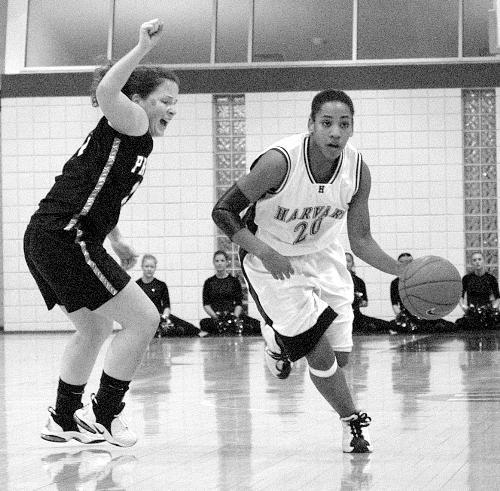 Freshman guard JESSICA HOLSEY (R), shown here in earlier action, has been sidelined by a shoulder injury for two weeks but may dress for this weekend’s Ivy matchups.
By Kathryn J. Hodel, Crimson Staff Writer

Despite twice nearly having a strong first-half performance negated by a late rally by the opposition, the Harvard women’s basketball team managed two more victories this weekend, beating Penn and Princeton.

The Crimson (18-4, 10-0 Ivy) narrowly escaped what would have been its first Ivy loss of the season with an 84-80 victory over the Quakers (11-11, 5-4) on Friday before defeating the Tigers (8-15, 3-6) 72-60 the following evening. The two victories extend Harvard’s winning streak to twelve and give the Crimson a three-game cushion at the top of the conference with only four regular-season contests remaining.

Harvard will host Cornell and Columbia on Friday and Saturday night, respectively, with the opportunity to clinch the Ivy League title and the accompanying berth in the NCAA tournament.

“To win out in the Ivies is a big goal of ours,” Moore said. “And knowing that we can clinch the Ivy League next weekend, we don’t really need any extra motivation.”

The Crimson’s chances at achieving perfection in league play will be bolstered by the likely return of freshman guard Jessica Holsey. Holsey has been out for two weeks with a shoulder injury, but there’s a good chance she will dress against Columbia and Cornell, according to captain Kate Ides.

In addition to maintaining its perfect conference record, the team also garnered academic accolades this week, as junior forward Hana Peljto and sophomore center Reka Cserny were named to the Verizon Academic All-District I Team. Peljto earned First-Team honors and advances to the national Academic All-America ballot, while Cserny was a Second-Team selection.

Harvard used a strong first-half effort to secure a victory over Princeton on Saturday night in Jadwin Gymnasium.

With the score tied at 17 with just under ten minutes to go in the opening frame, the Crimson went on a 20-7 run to take a 13-point lead going into the half.

“We had some defensive lapses in the beginning of the game,” Ides said. “But as we focused on playing better defense we were able to build a lead.”

Harvard maintained its double-digit advantage throughout most of the second half, but Princeton closed the gap to within seven in the final minute.

“Princeton is a team that never gives up,” Ides said. “We’re probably their biggest rivalry.”

Peljto recorded her tenth double-double of the year, scoring a team-high 16 points and grabbing 12 rebounds.

Despite hitting a season-high 14 three-pointers on the night, the Quakers fell one trey short in their bid to upset the Crimson.

Trailing by three with just seconds remaining, Penn guard Cat Makarewich had her three-point attempt bounce off the front of the rim. Harvard junior forward Tricia Tubridy pulled down the rebound to secure the Crimson’s victory.

The game marked the second time in as many weeks that Harvard had squandered a second-half lead only to come away with a win in the final minutes.

Last weekend, Cornell drew even with the Crimson in the final minutes of play after trailing by as many as 17 in the second half. Harvard relied on the clutch shooting of Peljto and Cserny to pull out the win.

It was again Cserny who came through for Harvard on Friday. The Crimson center tallied two of her game-high 27 points after the Quakers had cut Harvard’s 14-point lead to just one with 39 seconds remaining.

“We designed a play to spread the floor and isolate Reka inside and she executed perfectly,” Ides said.

The game was marked by swings in momentum that created dramatic runs for each team. Ahead 40-32 after a solid first half, the Crimson extended its lead to 15 over the opening seven minutes of the second half.

But Penn responded with its own rally, cutting the Harvard lead to four with just under 10 minutes remaining.

The Crimson gradually built its advantage back to 14 over the next five minutes, but the Quakers used four three-pointers over the final 3:40 to cut the lead to one before Cserny’s basket.

“[Penn’s] Jewel Clark is the type of player who has the ability to singlehandedly take a game on her shoulders and she did that towards the end of the game,” Moore said. “We needed to do a better job of stopping her.”

Mikaelyn Austin led Penn with 18 points on 6-of-11 shooting from behind the arc, while Clark, the second-leading scorer in the league behind Peljto, added 16 points and pulled down 12 boards in the loss.

Despite the momentum changes of the second half, Harvard managed a very balanced offensive effort throughout the contest.

Tubridy and Peljto finished the game with 15 points and 10 rebounds apiece, while Moore netted 10 points and dished out three assists.

“Penn is a tough team to play on the road and we showed a lot of poise at the end of the game to come away with the win,” Moore said.

—Staff writer Kathryn J. Hodel can be reached at hodel@fas.harvard.edu.