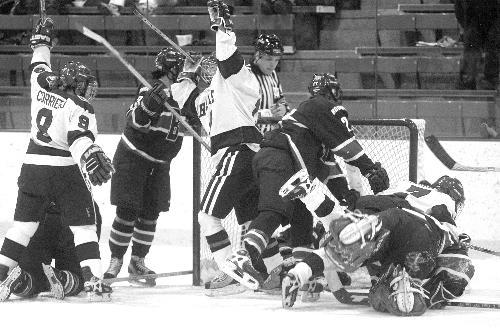 Captain KALEN INGRAM (7) scores the game-winning goal at 15:31 of the third period as she falls on top of Brown goaltender PAM DREYER in the crease.
By David Weinfeld, Crimson Staff Writer

The winning goal was credited to Ingram unassisted, although the identity of the real scorer is uncertain.

As the puck sat in the crease, Ingram and sophomore linemate Nicole Corriero flailed at the puck as a Bears defender flopped on to the ice. In the mass of bodies the puck somehow found its way into the net.

“Kalen and I just kept banging away at it,” Corriero said. “It went underneath a Brown player and she finally went in the net and the puck went in too. It just had to go in eventually.”

Ingram’s goal ended what was only the sixth third-period tie Harvard has seen all year.

Last night, the teams entered the third period with 20 shots apiece, and although the Bears trailed 3-2, momentum was on their side. The final frame opened with a five-on-three advantage for Brown and Bears sophomore Jessica Link buried a rebound to tie the score.

Despite Brown’s mediocre record, they kept up with Harvard through the first two periods, even while trailing by a pair of goals. Brown took 31 shots on the evening, more than any Crimson opponent all year. Harvard took 43.

The Bears tied the game with only 45 seconds remaining in the first period. Brown defenseman Cassie Turner caught Harvard goaltender Jessica Ruddock out-of-position in front of the net and slid the puck past her.

Harvard’s second goal came just two minutes into the second period on a powerplay opportunity. Botterill left the puck just outside the slot for junior winger Lauren McAuliffe, who slapped it by Dreyer to light the lamp.

The Crimson capitalized on another man-advantage two minutes later, as Corriero banged home an Ingram rebound for her 11th goal of the season and a 3-1 Harvard lead.

Brown center Kim Insalaco scored midway through the second period to begin a comeback. After Link’s tying goal in the third, the Crimson settled down, outshooting Brown 23-11 in the final frame en route to victory.

The Ivy League and ECAC titles are the first for all of Harvard’s players except Botterill and Ruggiero, who remain from the 1999 Harvard team because they took time off for the 2002 Olympics.