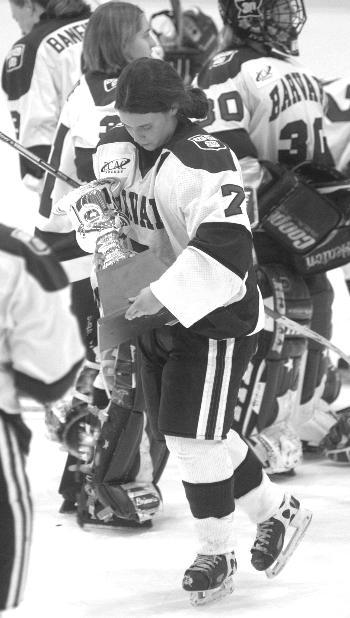 Unlike the Beanpot championship ceremony a week ago, the team did not skate the trophy around the ice. Few smiles were exchanged, except when the players knew the cameras were on them. For the most part, the team was just eager to get of the ice and heal from its brutal 4-3 victory over Brown.

The lack of emotion meant no disrespect to the regular season championship. Rather, it reflected the team’s greater mission.

“It feels good, it’s something our class hasn’t done before,” said captain Kalen Ingram. “I didn’t realize we’d have a little trophy presentation, but we’re after a little bit more.”

That little bit more includes winning an ECAC championship and an NCAA championship. While Harvard’s current No. 1 ranking and 22-game unbeaten streak are commendable, winning two games in the Frozen Four at the end of March matters most. Everything else has been a prelude.

“Tonight was a great stepping stone for us,” said captain Jennifer Botterill. “But there’s a lot more that were working towards.”

So while Harvard can be proud of sweeping Brown during the regular season, they could meet again in the ECAC semifinals. The Crimson could also face No. 4 Dartmouth a third and fourth time in the ECAC final and the Frozen Four.

“We’ve done it before and we’ll do it again,” she said.

When she says we, she’s referring to the Harvard program, in particular the 1999 team, from which only captains Angela Ruggiero and Botterill remain. The Crimson beat its toughest foe New Hampshire four times that year. Harvard swept them by 3-2 and 4-2 margins in the regular season, but needed overtime to beat them in both the ECAC final and national championship game. Even with a 29-game winning streak entering the final game, the Crimson’s season still hung in the balance until a goal from Botterill finally clinched the title.

Ingram feels Harvard will just have to stick its game plan to continue its success this season.

“We’ll come against teams again, and we’re going to beat them the same way we beat them before,” Ingram said.

Brown, for one, made it harder for Harvard to win by sticking to its game plan last night. The last time the teams met, Harvard didn’t need to pile bodies into the Brown net in the final minutes to deliver the game-winning goal.

All indications are that the gap between Harvard and its top rivals is closing, not widening, so there’s plenty of work left to be done.

“We’re playing for something a lot bigger,” Stone said. “They know it and they’re ready to go.”

Neither sophomore forward Kat Sweet nor freshman forward Carrie Schroyer dressed for last night’s game due to injuries. Sweet sat out with a mild concussion, while Schroyer is still healing from a shoulder injury against St. Lawrence over a week ago. Freshman Jacyln Pitushka earned time on the third line in their absence.

Schroyer was the hero in the Harvard’s 3-2 win over Brown in December when Stone elevated Schroyer to the first line in the third period and she scored on her first shift. Stone attempted the same trick with freshman Jennifer Raimondi last night.

“There’s a lot of hockey left to play so we want make sure we have everyone healthy in March,” Stone said in regards to Sweet and Schroyer’s injuries.

Sweet declined to comment to the media after last night’s game.

Unless Cornell can upset Brown or Harvard this weekend, the Crimson will host the Big Red in a best-of-three ECAC quarterfinal from March 7-9.