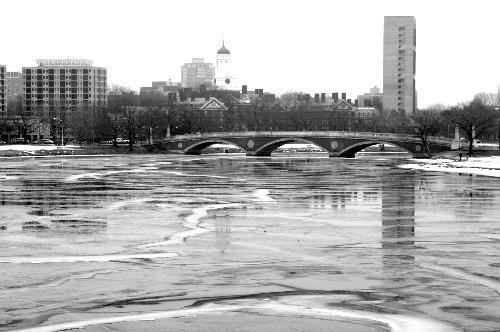 Students ignored warnings and dangerous ice as they ventured accross the frozen Charles River. If caught, offendors could face fines of up to $200.
By Elizabeth S. Widdicombe, Contributing Writer

After a weekend of rain and above-freezing temperatures, only the ducks are now braving the icy floes of the Charles River. Last week, however, they had human company.

Frigid weather left a thick layer of ice over the river, and Harvard students and others have been sighted making the perilous crossing by ice skate, foot and bicycle.

Both the University and the police are making efforts to deter students from crossing the river—a crime which carries a fine of up to $200.

“Anyone who [crosses] is literally taking their life in their own hands,” said Steven G. Catalano, a spokesperson for the Harvard University Police Department, adding that any attempt to cross the frozen river is “a seriously flawed idea.”

Warnings about walking onto the river ice have also been posted on both house e-mail lists and the Harvard College website.

But for Winthrop House resident Sean J. Cloonan ’03, crossing the Charles was a competition.

Trying to be the first among his friends to “get a living thing across” the river, Cloonan decided to scoot himself over the ice during intersession.

According to Cloonan, he and a few friends were halfway across on their first attempt when an unidentified helicopter hovered overhead.

Sensing a threat, Cloonan and his comrades turned back.

When Cloonan’s roommate did not believe his story, they returned to the river with a gaggle of spectators and the doubting roommate in tow.

Before they could cross, however, they were stopped by a state police officer.“He told us how stupid we all were,” Cloonan said.

The officer informed them of the fine, but was distracted by a biker pedalling across the ice.

Alexandra W. Zukerman ’06, who braved the ice last week, said the romantic appeal of traversing the river ice was irresistible.

“It was such a cool perspective,” she said. “It was really pretty, because it was just getting dark.”

Zukerman and a friend were on a run when they noticed footprints leading out onto the frozen river, and a large question mark drawn in the snow.

They ventured about 30 ft. off the bank before turning back. “It wasn’t scary at all,” she said. “We were careful, obviously.”

But not everyone has taken great care on the ice.

Students have reported seeing skaters near the Anderson bridge. “I figured if they were skating on it, I might as well cross,” said W. Ian Wallace ’05, who later made a successful crossing.

Despite warm temperatures over the weekend, which weakened the ice, temperatures are expected to drop back below freezing by the end of the week.

Regardless of the temperature, however, Lt. Ronald Sieberg of the Mass. State Police said testing the ice is never advisable.

“It’s dangerous out there on the river,” he said. “You just never know.”