Speak Up for Roe 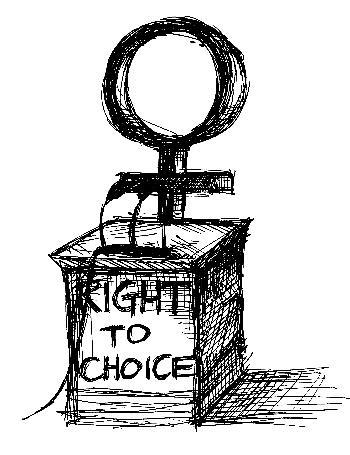 While most of us here at Harvard were celebrating the end of finals, women and men across the country were celebrating a different kind of victory. Jan. 22 marked the 30th anniversary of the Supreme Court’s landmark decision in Roe v. Wade, guaranteeing a woman’s right to choose in the United States. The days of back-alley, illegal abortions have been history since 1973, but with an anti-choice president in the White House and an anti-choice Congress behind him, those past horrors could once again surround us. The burden has fallen to today’s generation of men and women to make sure we’re still celebrating choice in another 30 years.

Because the majority of the Harvard College student community was born after the 1973 case, we’re considered the post-Roe generation. We’ve grown up with the privilege of taking reproductive freedom for granted and considering it a basic human right. It is hard for us to imagine a time when illegal abortions were an everyday occurrence. But before 1973, between 5,000 and 10,000 women died annually when illegally terminating their pregnancy in unsafe conditions. Willing to risk everything to end an unintended pregnancy, women sought out unskilled and unlicensed practitioners with dirty instruments and mutilating procedures. Women suffered innumerable consequences from back-alley abortions, including infections leading to pneumonia and septic shock, perforated internal organs and massive hemorrhaging resulting in infertility and death.

Our distance from these harsh realities led to a general complacency that has taken over the current pro-choice movement. Even on our campus, the fall of 2001 saw the disappearance of Students for Choice, a pro-choice student organization that simply lost its momentum. Yet it is clear that choice is still an important issue in the U.S. and at Harvard. Ask any female student, and she will assuredly have strong feelings about the laws that may or may not be governing her body. The loss of momentum certainly isn’t due to a loss of interest.

It is the anti-choice forces which are currently on the offensive, desperately fighting to chip away at every small reproductive right we hold dear. This December, for instance, the Bush administration appointed religious extremist David M. Hagar, MD, to the Food and Drug Administration’s reproductive health committee, a man who is notorious for prescribing biblical scriptures to cure premenstrual syndrome and for his refusal to prescribe contraceptives to unmarried women. The current administration has also allotted $135 million to abstinence-only education, which not only forbids the mention of condoms by teachers except to talk about their failure and refers to heterosexual marriage as the only healthy lifestyle, but also forces teachers to tell their students that “sexual activity outside the context of marriage is likely to have harmful psychological and physical side effects.” Unlike in the 60s, the current administration is surreptitiously attacking our reproductive rights instead of launching an overt campaign. If we are not vigilant, we could wake up to find that our reproductive freedoms have been snatched away.

This year’s 30th anniversary of Roe has begun to reenergize the movement. The time to act is now. Roe v. Wade has protected our right to privacy and freedom from government intrusion in personal decisions for 30 years. Reproductive health and childbearing choices are among the most personal decisions a woman can make. Yet today, we face a relentless, targeted attempt by anti-choice forces to deny women true equality. Legal abortion hangs by a slim margin of five to four in the Supreme Court. The probable retirement of two justices could allow an anti-choice president to pack the court with anti-choice judges. So this year, while we can celebrate 30 years of choice, it is our job to insure that reproductive rights don’t become history.

Abigail L. Fee ’05 is a social studies concentrator in Adams House. She is president of Harvard-Radcliffe Students For Choice.