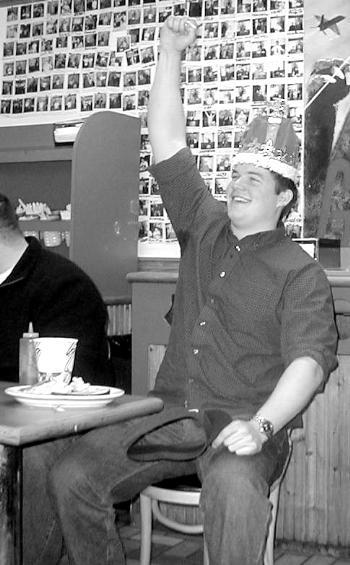 Walker beat out competitors from Boston College, Boston University and Northeastern at the contest, which was hosted by the Eagle Deli Restaurant in Brighton and organized by Boston television station WB56.

“I’ve never seen anything like it,” said Bill A. Aruda, a cook at the Eagle Square Deli. “This kid just sat down and ate the whole thing in four minutes. I’ve been here for a year and a half, and I’ve never seen anyone eat like that.”

Walker, who is six and one-half feet tall and weighs 260 pounds, said he had not planned on entering the competition.

“I didn’t really want to do it at first, considering that I’m supposed to be on a diet,” he said. “But all my friends came out to support me. So I figured I’d give it a shot.”

Walker was tapped to represent Harvard in the contest by John P. Veneziano, the College’s director of sports information. Veneziano had originally contacted two burly football players to compete, but they pointed to Walker as the most worthy candidate. Walker made his reputation in an informal eating contest last summer, when he consumed two entire pizzas in 19 minutes.

The burgers, however, are his biggest coup to date.

“This was really special,” said Nick A. Palazzo ’03, Walker’s roommate. “This competition with other schools is important. Most people think that us Harvard kids can’t do stuff like eat a three pound hamburger.”

“They think we’re not meatheads, but we are,” Palazzo joked.

The competition was inspired by the Beanpot hockey match that pits Harvard against area colleges.

The “Riley Burger,” which Walker consumed, consists of six half-pound patties, and is named for Sean Riley, the first person to accomplish the feat of eating it––in just over two hours.

The patties stacked up six inches high, and were held together by a long toothpick similar to a kebab stick.

The burger is usually served with a five-pound plate of fries, although the competitors were not required to eat them.

Sitting down to the table, Walker said he thought his biggest threat would come from the Northeastern eater to his right, a 300-pound lineman on the football team.

“He was big but he didn’t have his heart in it,” Walker said. “When we started eating I knew I was in good shape.”

Walker didn’t know that a rugby player from Boston College had pulled ahead, and was wolfing down hamburger patties at almost twice Walker’s rate.

Walker’s friends warned him of the threat, and he began to catch up.

“I was in the zone,” Walker said. “I could barely notice anything around me.”

He seized the patties, two at a time, quickening in speed and resolve. By the time he had reached the last patty, he said the eating had gotten easier. He stuffed down the last morsels of meat and threw his hand in the air.

Walker’s friends assert that he has always been a gifted eater.

“He always beats us,” he said. “Sometimes he does the saltine cracker thing––you know, six in a minute. It doesn’t seem hard but it’s impossible. Ian’s the only guy I know who can do it.”

Aruda said the Eagle Deli Restaurant is in the process of renaming its burger, and would consider using Walker’s name.

Walker said he had to take a three hour nap to recover from the contest.