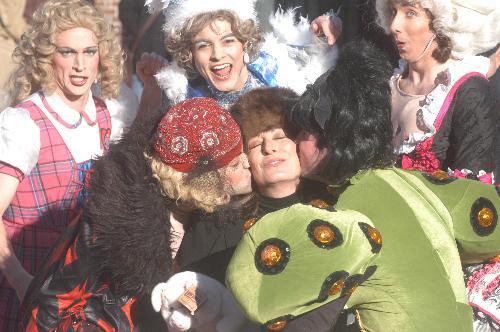 Anjelica Huston maintained a calm reserve as she paraded through Harvard Square and went through the notoriously flamboyant ceremony where she accepted the Hasty Pudding Theatricals Woman of the Year award yesterday.

Wearing a black blouse and matching blazer, Huston rode the streets of Cambridge in a black Volvo convertible, flanked by 13 rowdy Theatricals members.

The procession included a variety of entertainment ranging from live llamas and street musicians to an appearance by Miss Massachusetts.

Throngs of students and locals braved the frigid New England weather to catch a glimpse of the star from sidewalks and balcony windows.

As security made way for the star of such recent films as Royal Tenenbaums and Bloodwork, Huston laughed as her entourage sang, “O, Angie we love you!” and other loud chants.

But Huston had to do more to earn her “pudding pot” in the 53rd annual recognition of “lasting and significant contribution to the world of entertainment” than just take a loop through the Square with men in drag.

Theatricals President Stefan Atkinson ’03 and Vice President Shawn H. Snyder ’03, who emceed the ceremony that took place in the Pudding building, pretended to confuse Huston with singer Whitney Houston, and tried to make the actress sing along to the song “I Will Always Love You.”

“I will always love you,” Huston said flatly, laughing and refusing to sing any more.

But the men of the Theatricals still weren’t convinced, and directed her through whirlwind reenactments of the most famous roles of her career.

The parts she reenacted included her role as matriarch of a dysfunctional family in the Royal Tenenbaums and the frightening antagonist in The Witches.

When they got around to the morbidly sexy Morticia of the Addams Family, the Theatrical members tied her hands in two tiny nooses and a member clad in black leather pants and white body makeup and struck her lightly with a whip.

“This is starting to feel like fun,” she quipped.

Even as the emcees continually goaded her to moan, Huston made only a small “mmmm” noise.

When the emcees finally presented Huston with the pudding pot, the actress joked about the uses of the trophy.

“How incredibly proud I am to have been presented with this little pot,” Huston said. “To put what? Oatmeal? Mustard?”

Later, she called it “a good little witches brew pot.”

In a press conference afterward, Huston expressed her total surprise at the afternoon’s wild proceedings, saying she expected Harvard to be more “staid.”

“I had no idea I had to work for this award,” the actress said afterward. “I was completely unprepared to go on stage. It was good for me, I would say, a good learning experience.” The actress joked about the way the Theatrical’s antics dramatically changed her perception of Harvard.

“I’ve always regarded universities, particularly this one, as a hallowed place,” Huston said. “My opinion has been radically reversed.”