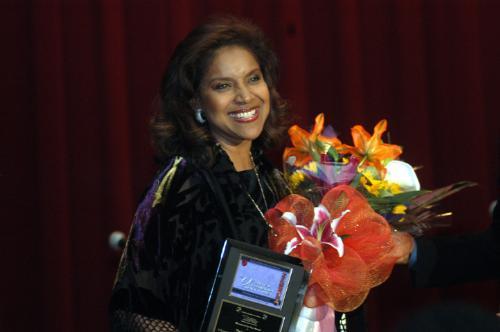 Actress Phylicia Rashad, known to most as the strong-willed Claire Huxtable of “The Cosby Show,” was feted by the Harvard Black Men’s Forum (BMF) at the Park Plaza hotel Friday night.

The BMF presented Rashad with its “woman of the year” award at it ninth annual Celebration of Black Women, a night dedicated to the contributions of black women to Harvard and the world.

The group also recognized nine members of the class of 2003 and a college-bound high school senior for their “excellence, commitment to public service, and a desire to make a difference.”

Musical selections were interspersed between speeches and award presentations.

Rashad, who joins the ranks of previous honorees including Poet Laureate Gwendolyn Brooks and poet Faye Jessica Care Moore, was lauded by organizers for using her presence on “The Cosby Show” to counteract stereotypes.

“[The show] has had more influence on America than any other program in terms of portraying the proper image of African Americans,” S. Allen Counter, director of the Harvard Foundation for Intercultural and Race Relations, said in presenting Rashad the award. “She has worked very hard to bring social issues to the screen.”

Rashad’s character on the show juggled a successful career as a lawyer with the trials and tribulations of raising a family with her husband, played by Bill Cosby.

Following a standing ovation and the acceptance of the award, Rashad spoke of the humbling experience of being honored.

She praised the BMF for taking the initiative to honor black women, which she called an act “so against popular culture.”

“A man is not a real man,” Rashad said, “unless he honors and takes care of the women.”

Without deviating from a cool, collected tone that she carried throughout her speech, she then quipped, “You guys are ’da bomb.”