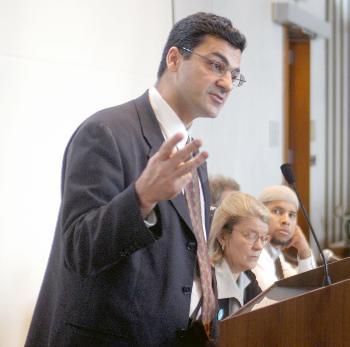 Three civil rights leaders urged Muslim Americans and others to speak out against government encroachment on civil liberties at panel at the Divinity School yesterday morning.

The discussion, which was part of the two-day Islam in America 2003 conference, focused on violations of American Muslims’ civil rights since the Sept. 11, 2001 terrorist attacks.

“What can we do?” Cohen asked rhetorically. “Fight back. Do not go silently into the night. Stand up, organize, boycott, demonstrate.”

Cohen, who has represented members of Native-American communities in the past, compared present treatment of some Muslim Americans to black slavery and the internment of Japanese Americans during World War II. He criticized the government for hiding its activities from the public eye.

Al-Marayati, cofounder and director of the Muslim Public Affairs Council and member of the Executive Committee of the California Democratic Party, said that many Muslims today live in “virtual internment camps,” afraid to leave the boundaries of their own communities.

Nonetheless, he said, the American Muslim community should avoid a sense of victimization. In a period when government standards of treatment seem inconsistent, concerned citizens should make their voices heard.

“Civil liberties are being discussed in small rooms among small groups of people,” Al-Marayati said. “Today, there is a cause, and if there is no effect, the cause will continue.”

Joshua Salaam, who is director of the Civil Rights Department for the Council on American-Islamic Relations explored possible causes for what he termed the “vilification of the Islamic community” in government discourse and media coverage.

The Islamic community should work to quash fallacious perceptions of Muslims by campaigning specifically against such vilification, he said.

Al-Marayati added that the government’s attitude toward Muslim Americans threatens to violate their Constitutional rights.

He urged the audience to begin to examine this problem from a Constitutional vantage point.

“We should embrace the Constitution,” he said. “We should learn to have a discourse on that issue itself.”

But Cohen said he thought the courts would not be helpful in upholding Constitutional rights.

Rather, he advocated more public criticisms of government actions to ensure that Muslim Americans have their rights respected.

The panelists all noted that the Domestic Security Enhancement Act of 2003, which would allow de facto—rather than explicit and witnessed—termination of citizenship poses a serious threat to civil liberties.

If passed by Congress and signed into law, the legislation could allow the government to interpret any number of acts as indications that a citizen wants to end his or her citizenship, according to Cohen.

Citizenship could be revoked without explicit approval from citizens themselves, he said.

All three panelists stressed the need for solidarity with Muslim Americans.

“We have a lot of great players,” said Salaam, joking that he felt compelled to use a sports analogy. “But you can’t win alone.”

The discussion was moderated by Professor of Comparative Religion and Indian Studies Diana L. Eck.