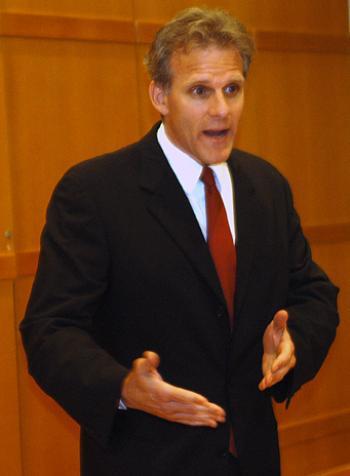 Historian MICHAEL OREN talks about his bestseller, Six Days of War: june 1967 and the Making of the Modern Middle East, yesterday at Harvard Hillel.
By Jayme J. Herschkopf, Contributing Writer

Israeli-American historian Michael Oren compared the current climate in the Middle East to the one preceding the 1967 Six Day War in a talk last night at Harvard Hillel.

Oren, whose book Six Days of War: June 1967 and the Making of the Modern Middle East is a bestseller, said the Middle East has come full circle since 1967, and now has similar power struggles and identical economic conditions as it did then.

“In both cases you have a deteriorating spiral process in the Middle East, in which Israel finds itself caught up,” Oren said.

For his book, Oren made use of tens of thousands of secret political documents about the war that have surfaced in Israel, Egypt, Syria and Jordan.

“Every event in Israeli history since it has been intrinsically tied to this single week, including the current climate,” he said.

Oren gave a detailed description of the events leading up to the war, from the failure of American ambassador Wally Barbour to deliver a letter that would have prevented a Jordanian raid, to an Israeli offensive. That action, narrow in its initial scope, ultimately became an all-out attack against neighboring Arab states.

“The Six Day War broke out as a result of a series of misperceptions, errors in thinking and often just plain bad luck,” Oren said.

He said that a similar series of events could easily spark war today. As an inhabitant of Jerusalem with a son in the Israeli army, Oren said he found that fact “personally quite terrifying.”

After his talk, Oren answered questions that centered on the current situation in the Middle East.

Oren balked at predicting the future course of events. “I’m a historian, and I have problems predicting even the past,” he said.

Oren spent several minutes discussing the positive effects the possibility of war with Iraq has from the Israeli military’s perspective.

He said an attack on Iraq is necessary for America’s security.

“We’re trying to bring in a series of scholars to talk about Israeli history and politics,” said Liora R. Halperin ’05, one of the event’s organizers.

She said was pleased with the talk.

“I think it was very balanced. He really tried to approach the topic without assigning any blame,” she said.