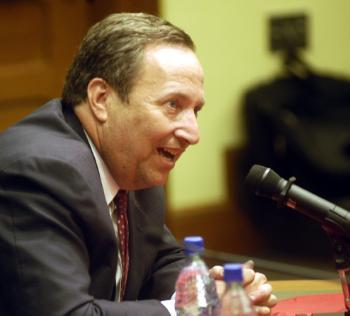 The meeting marked the first time Summers has talked publicly with students about the dean search, which began shortly after HLS Dean Robert C. Clark announced his resignation last November.

Students said they hope that when Clark leaves his Griswold Hall office at the end of June, his successor will be more concerned with the quality of student life and recruiting faculty and students with diverse backgrounds.

Summers stressed that finding someone to keep HLS “an exciting place intellectually and professionally” is his top priority.

“The new dean will be a leader who can provide a vision for legal education at a time when the legal profession is changing in so many different ways,” he said.

Members of Diversity in Education: Action Now! (DEAN), a recently-formed activist group, called on Summers to appoint a dean who supports affirmative action and diversity at HLS.

The group also organized a rally on the steps of Austin Hall before the meeting.

The meeting opened with the presentation of a petition, signed by more than 250 students, requesting that Summers consult students on the dean search.

Students told Summers that administrators at the Law School have not adequately responded to their concerns about gender, law and class.

Administrators value alums’ concerns far more than those of current students, they said, stressing that the new dean should focus on improving the quality of student life.

“I have found that alumni do not reflect fondly on their time at the Law School,” said one HLS student who said he helps with alumni telethons. “I want a dean who will focus on student atmosphere—and what we can do to make student life here more enjoyable.”

Other students decried what they said was a lack of representation with the faculty and criticized Clark for not fulfilling his role as an advocate for students.

“It seems like fundraising is Clark’s priority, but as a result he is always off with alumni and is never around to listen to student concerns,” one student said.

“There is a strong sense of alienation and isolation in the student experience here,” said third-year Josh Aronovitch.

Several students said that Clark has fostered an atmosphere that prioritizes corporate law over government work, public service and public interest law. The new dean, they said, should have experience in multiple fields of legal work.

Cathy Hart, a third-year HLS student, told Summers that she hoped the next dean would strive to recruit more mothers and maintain their retention rates at the law school.

When one student encouraged Summers to release a short-list of the HLS dean search finalists to provoke discussion about the qualities most important in choosing Clark’s successor, many in the audience responded with a standing ovation.

“We need someone who is willing to stand up for the students, and be proactive,” third-year Chris Kolovox added.

“Does that include a dean who is willing to resist many of the sentiments applauded here tonight?” Summers responded.

Kolovox added that it was crucial for Summers to make the short list public.

“This is not about the students choosing the dean, but rather them feeling as though they can weigh in on the issue,” he said, “especially at the Law School, where everyone feels like they are smarter than they really are and their opinions are better than anyone else, this could offer a way for discussion to be had, for students to feel like they are being listened to more.”

Another student who spoke at the meeting cited a recent random survey of second and third-year HLS students which he said he conducted along with a student at the Graduate School of Education.

According to the results, he said, 47.5 percent of students said that caring about student concerns should be the most important quality in the new dean. Charisma and courage were close seconds.

Summers chided students for not being more forthcoming with suggestions on the dean search, citing a low volume of e-mail to the address he set up for the purpose of collecting student sentiments.

“Ultimately, this is a choice that is made, not negotiated,” Summers told students. “This is the tradition of most universities. We’ve received much more feedback from faculty than students on this issue, but of course I am happy to discuss the dean search with students in my office hours.”

But Kolovox said after the meeting that many students would be hesitant to e-mail Summers their views.

“I fear that I would not get a response, and even if I did, it would be perfunctory and probably from an aide of Summers,” he said. “It comes across as disingenuous at some level, and does not feel quite right.”

—Staff writer Lauren A.E. Schuker can be reached at schuker@fas.harvard.edu.