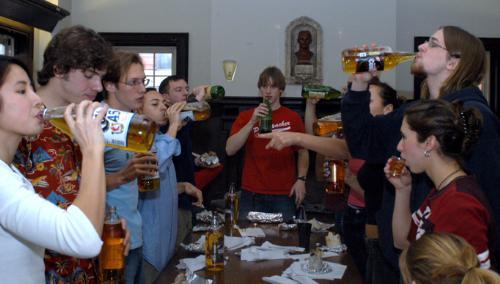 On March 8, 2003, at 4:43:37 p.m., on the second floor of The Harvard Crimson, gastronomical history was made. Two brave young souls had each just consumed a 40 ounce bottle of malt liquor and a 40 ounce burrito from Real Taco in under 40 minutes—in 13 minutes and 37 seconds, to be exact. The first members of the 40-40 Club were inducted. Forty home runs and 40 stolen bases wouldn’t get anyone past the bouncer here. Eat your heart out, Barry Bonds.

Two heroic young men went first. Others would follow. Some would move on to even greater accomplishments. This is their story, as told from the point of view of participant and event organizer Abraham R. Kinkopf ’04. Zero time is 4:30 p.m., EST.

-0:15:00 Gerard recommends that we say grace before the festivities. Thomas attempts to transubstantiate his burrito.

-0:05:00 Ben cracks open his 40 before the festivities begin in an attempt to release excess carbonation. This is bullshit. He is reprimanded and warned not to try to cheat again.

0:02:40 Ben is already pulling way ahead of the pack. He has already downed almost half of his 40 and is one third of the way through his burrito.

0:03:30 Participants protest that Adam is enjoying an unfair advantage due to the fact that his burrito has no beans. Participants are informed to stop bitching and that no one is really “enjoying” anything here.

0:05:30 Andrea defends herself against allegations that she faked chugging her 40 during a group toast, citing her “really small throat.” Euphemisms abound. Andrea then proceeds to show us her “really long tongue.” She truly is a woman of extremes.

0:07:00 Anne, who is moving along at a breakneck pace, dedicates her performance to Brandon M. Terry ’05, who, upon hearing that Anne was planning on participating in the 40-40 Club, remarked that she had as much of a chance of finishing as the Baltimore Orioles have of winning the World Series.

0:07:45 Gerard expresses the wish that I include here how I completely dominate him in Madden 2003.

0:08:00 For no apparent reason, participants begin hurling insults at me. The insults cease when I threaten to slander anyone who steps out of line.

0:08:25 Aaron finishes his 40. He seems to have the win in hand. Gerard claims he is going to have a ‘late kick.’ Ben threatens to give Gerard a ‘late kick’ in the nuts.

0:10:18 Gerard begins to do sit-ups. This is an obvious ploy for a more prominent role in the story. Several of the participants, led by Arthur—whose mythical eating prowess seems, at least up to this point, to be nothing more than mythical—protest Gerard’s showmanship.

0:11:10 Attention is diverted from Gerard and Jessica as it becomes clear that Ben and Aaron are in a dead heat for the win.

0:12:00 Ben is fading. Andrea gives him the double-guns and yells, “College!” This is funny, because one of Ben’s favorite pastimes is to point at random people with both hands and yell things.

0:13:21 Ben and Aaron become the co-first place finishers in the first ever 40-40 Club Challenge. Ben could have easily finished first, but instead he waits for Aaron to catch up so they can finish together. It reminds me of a cheesy sports movie where two bitter rivals give it all they have until the very end, and just when one of the guys—usually the good-hearted one—is pulling ahead and you think he is going to win, he turns around and waits for the other guy, who has a pebble in his shoe or something, and they finish together. My heart is warm. And my left arm is tingling.

0:15:00 Aaron comments on Gerard’s position as president of the Harvard College Democrats. Should someone in such an important position be participating in an event like this? Gerard responds, “What the hell? George Bush snorted cocaine. If I want to have a little burrito, and a little malt liquor, then I think I’m entitled to do that, too.”

0:15:30 Thomas is doing shots of Tequila. Chuck, who has been taking tequila shots for the past 15 minutes, is getting out of control.

0:17:04 Thomas does a “body burrito shot” off of Anne. I am inclined to believe that this sort of thing will not catch on.

0:20:39 Thomas finishes in fifth place. He has been taking shots of Tequila in addition to the required malt liquor and burrito. Perhaps this slowed his pace a bit.

0:20:50 Jessica and Anne become the first female members of the 40-40 Club. Orioles fans across the globe experience a sudden, inexplicable surge of hope. Adam, Abby, Arthur, Andrea and Chuck are still going.

0:22:20 Adam finishes. Twenty-two minutes is a decent time, but, to be honest, I expected more out of my roommate.

0:23:10 Andrea, struggling mightily, begins eating the inside of the burrito with a spoon.

0:23:47 Arthur finally finishes. A disappointing showing, to say the least. Many people had Arthur picked to win this event. He was hampered by a hangover the entire time.

0:25:20 I pop open an extra King Cobra. I’m going for “54’ 40” or Fight.” Fourteen ounces of malt liquor is a small price to pay for membership in an elite club whose name commemorates our nation’s long, bloody struggle against evil Canadian aggressors.

0:27:05 Gerard begins punching me. If he hits me in the stomach, I swear I will projectile vomit on him like that little girl did in “The Exorcist.”

0:34:38 Anne, Jessica and Andrea put on a wrestling exhibition. The men in the room are mesmerized.

0:35:00 Gerard tries to get in on the action, but succeeds only in ruining it for the rest of us.

0:35:30 Rob officially drops out of the competition, although he had conceded defeat nearly a half-hour before.

0:37:30 It is clear that Andrea is not going to finish. Abby has about one quarter of her burrito left. All eyes turn toward her. Someone remarks that she is “so close, we can taste it!” How witty.

0:38:30 Jessica joins “54’ 40” or Fight.” Abby and Andrea are valiantly fighting the clock. It doesn’t look good. Neither of them has made much headway in the last minute.

0:41:20 Arthur, who looked so miserable only twenty minutes earlier, is now attacking his second burrito. He claims that he is still hungry.

0:44:45 We line up the empty 40 bottles to take a picture with them. When I comment on the two half-finished King Cobras on the table, Adam moves them to the floor. “No one has to know,” he says to me. “Just like Russian history.”

0:45:03 Thomas announces his intention to go to the bathroom and “get some good reading done.” Good thing we’re at The Crimson.

0:45:15 Thomas thanks Moses for his performance.

0:46:00 Arthur helpfully suggests that we recycle the empties. I have a good comeback that I now forget. Something about how recycling sucks.

0:46:52 Abby says, “I think that they have probably had babies survive that are smaller than this burrito.”

0:51:20 Chuck is throwing limes at people. She has to be restrained. It’s all fun and games until someone gets hit with a citrus fruit.

0:52:00 Andrea comments that we should have played “40 Ounces to Freedom” by Sublime while we were doing this.

0:53:00 Aaron claims that we are “a testament to the complete idiocy of college.” Several participants are reminded that they have to go back to their rooms and study.

1:06:00 We leave The Crimson and head over to Real Taco to thank the owner, Joel Espinoza, who was an integral part of this event. We sing several choruses of “For He’s a Jolly Good Fellow.” Joel responds by giving us t-shirts. All is well.

FM, the 40-40 Club and “54’ 40” or Fight” would like to thank Joel Espinoza and Real Taco, without whose generous contributions of delicious, delicious burritos none of this would have been possible.