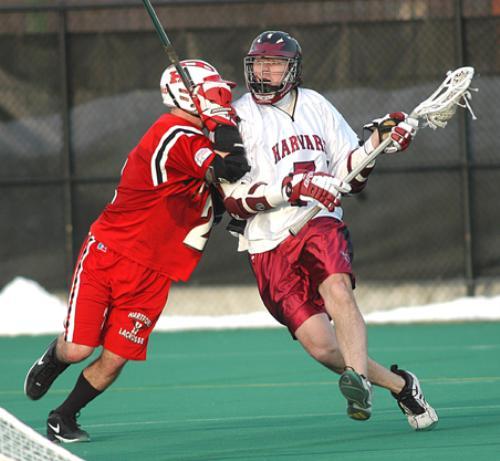 After taking its first lead of the day on a goal by freshman attack Colin Macleod with 6:56 left in the third quarter, the Harvard men’s lacrosse team thought it had finally snatched the momentum from Fairfield with the score 4-3 in a tightly-contested game.

But the Crimson (1-2) could not keep the advantage. Just 23 seconds later, the Stags’ Rick Voight scored, beginning a six-goal run that led to a 10-7 victory for Fairfield (2-2).

“They seemed to be getting a lot of their goals off of the faceoffs and fast breaks,” said tri-captain defender Andrew Crocco. “Normally [junior midfielder] Alex Vap does a great job on face-offs. But the Fairfield guy just seemed to be doing something new that Alex wasn’t really able to deal with.”

Harvard lost 16 of 22 faceoffs against the Stags despite having dominated the category in its first two games, winning 22 of 31.

The Crimson had a big run beginning at the 3:49 mark of the fourth quarter, when it outscored Fairfield 3-1 to close out the game. Tri-captain attach Matt Primm scored his second goal of the day to start the surge, which also included tallies from sophomore attack Mike McBride and freshman attack Sean Kane.

“With about eight minutes left I think our team finally started to feel the sense of urgency in the game,” Primm said.

For the second straight game, most of Harvard’s scoring came in the second half. Neither team scored until 7:44 remained in the second quarter, and the first half ended in a 2-2 tie.

Last Saturday against Hartford, the Crimson went into halftime down 2-1, but managed to emerge with a 9-3 victory.

All season, the Harvard offense has suffered from an inability to finish open opportunities and has continually relied on Primm (two goals, two assists) to create any kind of offense.

“Primm could beat his man any time he wanted to during the game,” Macleod said. “[He’s] the best player on our team.”

Macleod’s go-ahead goal caught the Stags in an awkward fast-break situation. Junior defender Spencer Stenmark intercepted a Fairfield pass and advanced the ball to sophomore midfielder Doug Kocis, who was breaking to the opposite end of the field and dished it off to Primm at the point. Primm then found Macleod, who sent a shot flying past Fairfield goaltender C.J. Kemp.

Harvard returns to action tomorrow at 7 p.m., when it hosts Holy Cross (0-4), which is coming off of a 15-9 loss to Hartford. The Crimson will then open its Ivy schedule, hosting Penn (3-2) on Saturday at 1 p.m on Jordan field.