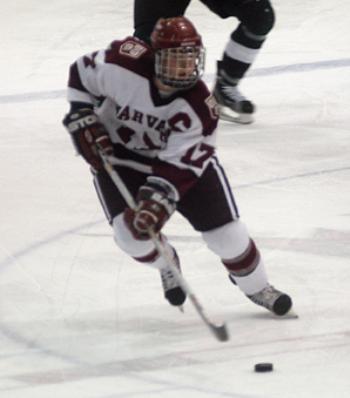 Captain JENNIFER BOTTERILL leads second-seeded Harvard into the Frozen Four in Duluth, Minn. next weekend.
By David Weinfeld, Special to the Crimson

The latter was the case at yesterday’s ECAC championship, as No. 1 Harvard fell to No. 4 Dartmouth 7-2 at Brown’s Meehan Auditorium.

Maybe curses are contagious—if so, the Boston Red Sox strand may have spread to Cambridge. For the fourth consecutive year, Harvard bowed out of the ECAC championship tournament to Dartmouth.

This year was especially painful. For while the Crimson (29-2-1) had won both previous meetings this season with archrival Dartmouth (26-7-0)—a 9-2 shellacking in Hanover over a depleted Big Green squad and a 2-1 nail-biter in Cambridge—when it mattered most, Harvard came up short.

The loss ended the Crimson’s 27-game unbeaten streak, and Dartmouth did it all with freshman Stephanie Cochran minding the net instead of senior Amy Ferguson, who missed the game with severe gastrointestinal problems.

Dartmouth led 3-0 after the first period and 7-1 after two. In those two periods, the Big Green outshot Harvard 29-19. Though the Crimson outshot the Big Green 16-4 in the final frame, it was too little, too late.

“For the first five minutes, we allowed Harvard to play their game and we weren’t doing anything,” said Dartmouth coach Judy Oberting. “That’s when they’re most dangerous, when you give them space. Then we took that space away. You could feel the momentum shifting.”

But when Dartmouth captain Carly Haggard scored on a breakaway at 8:23 of the first period, Harvard fans were not alarmed. The Big Green had scored first in its two previous losses to Harvard.

“Harvard has not been behind very often,” Oberting said. “Actually we scored the first goal in both games so originally I thought it was a bad sign. But we just kept on going after that and you saw them back up a little bit.”

Harvard even had a power-play opportunity only a minute after the goal. But the Crimson failed to convert under the relentless pressure of the Big Green penalty-killing unit.

When Dartmouth winger Sarah Clark scored on a 2-on-1 six minutes later, beating Ruddock with a soft shot, it became clear something was amiss. The Crimson hadn’t faced a two-goal deficit all season.

Not two minutes had gone by when the Big Green scored again. Center Krista Dornfried poked the puck home amidst traffic in front of the net. The Harvard defense was noticeably ineffective.

“I think when we got up early—three quick goals—they got a little frustrated and a little panicky,” said Dartmouth defenseman Correne Bredin.

Every time it appeared the Crimson would wake up and play like the No. 1 team in the country, the Big Green asserted its place among the nation’s best.

Less than three minutes into the second period, Dartmouth winger Cheryl Muranko made it 4-0, tipping in Gillian Apps’ shot.

At 7:54, Big Green captain Correne Bredin, the ECAC tournament’s Most Outstanding Player, scored from the point. The mood in Meehan Auditorium was surreal. The seemingly invincible Harvard Crimson was being beaten, badly.

At 5-0, Harvard finally responded. Senior winger Tracy Catlin tested Cochrane, floating a weak backhander on goal, perhaps hoping for a rookie mistake. She got one, as the freshman allowed the shot to trickle in and Harvard’s hopes to rise for a time.

The Crimson, however, failed to sustain any consistent attack. The Big Green was faster on Sunday. It made crisper passes. It converted its chances. It broke from its zone quickly and efficiently. It forechecked aggressively. It applied relentless pressure to the Harvard offense. It murdered the Crimson with its transition game.

Harvard was mortal. Its passes were too long—and when they were on target, they were often poorly handled. Junior captain Angela Ruggiero—the best defenseman in the world—was not the dominating presence she has been all year. Captain Jennifer Botterill—the nation’s leading scorer—appeared three steps slower than she did against Brown the day before.

“We like what we’re doing—it’s just a matter of execution at this point.”

That was the story of the game: Dartmouth executed, Harvard didn’t.

The Big Green’s sixth goal was almost impossible to comprehend. With barely a minute remaining in the second period, Big Green freshman and 2002 Canadian Olympic gold medalist Cherie Piper blew by Ruggiero, broke in on goal and scored. Nothing like that had happened all season.

Less than a minute later, with only 16 seconds remaining in the period, Bredin scored again from the point.

With Dartmouth leading 7-1, Harvard pulled Ruddock for freshman goalie Ali Boe to start the third period. Three minutes in, Catlin scored her second goal of the game on a shot from the left side.

Harvard dominated the third period—but only by the numbers. Dartmouth had already won the game and had nothing left to prove. The Crimson failed to convert on both of its third-period, power-play chances. Ruggiero and fellow defenseman and captain Jamie Hagerman took late penalties for slashing and roughing respectively, demonstrating their frustration.

The Crimson will be able to act on its frustration soon. Both Harvard and Dartmouth will continue on to the Frozen Four next weekend in Duluth, Minnesota.

“It’s fun that we both get to play again,” Bredin said. “It would’ve been nice to end their season, but I don’t see that happening.”

Due to the loss, the Crimson will likely lose its No. 1 ranking. For the Frozen Four, it is seeded second, behind defending champion Minnesota-Duluth and ahead of Minnesota and Dartmouth.

“Obviously we are disappointed,” Stone said. “We wanted to win this ECAC Championship. We also understand that our season is not over and it depends on what we do now.”

Harvard will face Minnesota on Friday. The Gophers handed the Crimson its only other defeat of the year, 4-3, in Minnesota in November.