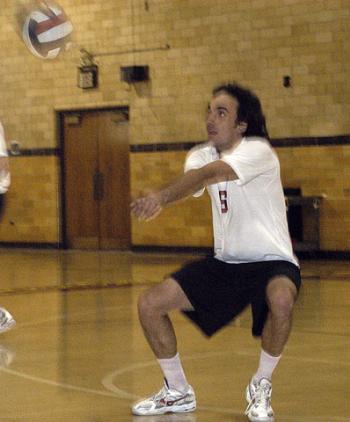 Sophomore outside hitter WILL REPPUN goes in for a bump as the Harvard men’s volleyball team closed out its regular season with two wins against East Stroudsburg and Queens.
NO WRITER ATTRIBUTED

It was Senior Day at the Malkin Athletic Center yesterday and for tri-captains Mike Bookman and Alex Kowell the final home game of their collegiate careers could not have been any sweeter.

The Harvard men’s volleyball team needed five games to triumph in a tightly-fought battle with Queens College. The victory came on the heels of an efficient 3-0 victory over East Stroudsburg on Saturday.

The Crimson (5-6, 5-4 Hay) is now in third place in its division, trailing only Vassar and Springfield.

Harvard stepped up in the fifth game, taking control from the start. Sophomore outside hitter Juan Ramos contributed two kills as the team jumped ahead 5-0 and the Knights fell apart, missing six kill attempts and hitting two serves into the net.

The blowout finish was an anticlimactic end to what had been an intense match.

A huge dig by sophomore outside hitter Ryland Degnan and subsequent kill by sophomore outside hitter Will Reppun gave the Crimson a 34-32 win in game four. Harvard started out slowly, but the team clawed its way back into the game, closing an 18-13 deficit to pull even at 25. The Crimson had served for the victory at 29-28, but the Knights’ Neal Octave converted a kill down the line to keep Queens in the game.

Harvard took the first game of the match on the strength of junior Juan Carlos Cardet’s late-game explosion. Cardet registered five kills and two blocks, accounting for seven of the last nine Crimson points. Cardet scored four straight points on two kills and two blocks to push Harvard ahead by four, 25-21. The Crimson would not relinquish the advantage, closing out the game 30-23.

Neither side could forge more than a two-point advantage in a back-and-forth second game, but the Knights eventually came alive, making the plays they needed down the stretch to stay just ahead of the Crimson. Ultimately Queens served leading 29-28 and an errant Harvard pass led to an easy, game-winning kill by Octave.

The Knights jumped out early in the third game, quickly grabbing an 11-4 lead. Despite a fervent Crimson effort in the latter stages of the game, Queens was able to maintain at least a three-point cushion throughout.

“It seems to me that we play better from behind,” Harvard coach Rob Keller said. “It takes us having our backs against the wall to finally realize that it’s time for us to play.”

“We have raised the bar in terms of the level of our expectations,” Keller said. “We are showing the division the level of volleyball we play at Harvard now.”

The final game showed the Crimson was a cut above the Warriors. In the early stages of the game, East Stroudsburg missed three kills and botched two sets, quickly falling behind 9-4. Harvard took advantage, pushing the lead to double figures, 20-10, on the strength of an ace and two kills by Kowell. The Crimson never allowed the Warriors to get within seven points, ending the match in complete control.

Harvard’s strong finish came after a lackluster stretch performance in game two that saw East Stroudsburg cut a 24-11 deficit to just five before two huge Reppun kills sealed the win for the Crimson.

Harvard struggled in the early moments of the first game, falling behind the Warriors 8-5. After a timeout, the Crimson came out focused, taking 12 of the next 16 points to build a five-point cushion. East Stroudsburg took advantage of a few Harvard miscues to close the gap to 25-23, but the Crimson never lost its composure, closing out the game 30-26.