Rematch with No. 3 Minnnesota Set for Friday 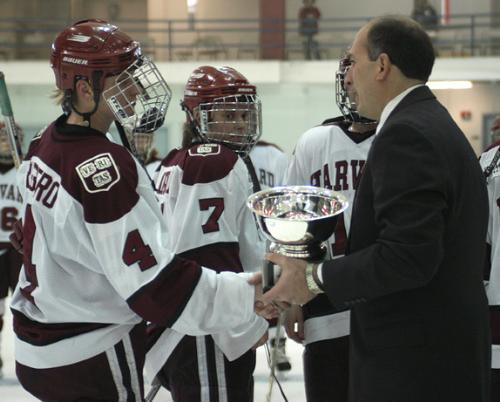 PROVIDENCE, R.I.—Since the Harvard women’s hockey team has been ranked No. 1 in the nation since December, receiving the No. 2 seeding in the 2003 NCAA Women’s Frozen Four last night was a change of pace. That result, however, is of little consequence because the Crimson will have every opportunity to reassert itself as the nation’s best team when it matters most—at the end of the season with the national championship.

A 7-2 loss to Dartmouth in the ECAC championship game likely cost the Crimson the No. 1 seed. Prior to the defeat, Harvard had been unbeaten for 27 straight games.

Captain Kalen Ingram was indifferent to the seeding.

“I don’t think the rankings really matter,” Ingram said. “It’s just two games and whoever shows up for those games. Whatever has happened in the past is the past and it’s all a matter of who shows up on Friday and who shows up on Sunday.”

That doesn’t mean yesterday’s loss is forgotten, however.

“It stings a lot,” Ingram said. “It stings the most because we didn’t show up to play for two periods.”

Captain Jamie Hagerman had expected to remain the No. 1 seed but nevertheless recognized its irrelevance in comparison to the national championship.

“I’m a little surprised at the seeding,” Hagerman said. “The loss hurt us more than it helped Dartmouth. But all in all, we’re still in the Frozen Four.”

Harvard was superior to Duluth in three of the five NCAA seeding criteria. The Crimson had a win over the Bulldogs and slightly better performances in its last 16 games and against teams under selection consideration. But Duluth had a far better ratings percentage index and record against common opponents. The Bulldogs’ selection as the top seed was not inconsistent with the NCAA’s criteria, which allow some room for subjectivity on the part of the committee.

The seeding ensured that the semifinals would not be rematches of the ECAC and WCHA championship games. Avoiding first-round intraconference matchups is often a priority in NCAA seeding processes.

The No. 2 seed has been a prosperous position in the two-year history of NCAA tournaments. Duluth won the tournament as the No. 2 seed in both 2001 and 2002. In contrast, the No. 1 seed did not reach the championship game either year.

Of the four teams still playing, none has entirely dominated any other this year, meaning there are plenty of scores to be settled this weekend.

Duluth beat Minnesota in four of five meetings and swept two games against Dartmouth while the Big Green was missing four players participating in a Canadian national camp. Dartmouth beat the Golden Gophers 6-3 in January in their only meeting.

Harvard beat Duluth 2-1 and fell to Minnesota 4-3 when the teams met in November. The Crimson had beaten the Big Green twice during the regular season before falling to Dartmouth in the ECAC tournament for the fourth straight season.

“We realized after [yesterday’s] game we were going to [next] play either Dartmouth or Minnesota, the two teams that had beaten us—either way, a little redemption,” Ingram said. “We’re happy to have another chance and we’re going to make the most of it.”

Harvard will get its shot at redemption on the grandest stage available. Because this year’s Frozen Four is the first to have a host school make the field, attendance records are expected to be set. The Duluth News Tribune reported a month ago that all but 1,100 two-day session passes had been purchased. The host site seats 5,500.

There will plenty of media coverage there as well. The championship game will be televised live on Fox Sports North in the Minnesota area and on NESN in New England. NESN will air the semifinals on tape delay on Saturday. WHRB will be broadcasting all the Harvard games live.