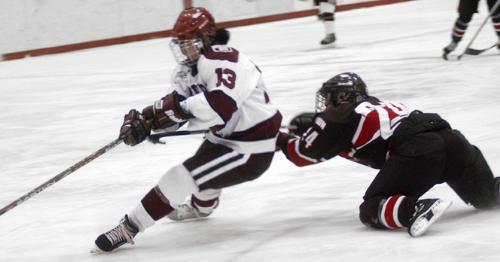 Freshman JULIE CHU (13) had a goal and four assists in a 10-3 win over Brown despite being hooked here by ASHLEE DROVER (24).
By David Weinfeld, Crimson Staff Writer

The loss was particularly heartbreaking for Brown, which had played Harvard tough in the teams’s two prior meetings this season and stayed with the Crimson for two periods. But every time the Bears showed signs of life, Harvard killed their momentum with timely, backbreaking goals.

Senior winger Tracy Catlin scored from the slot 25 seconds into the first period.

“Unfortunately, we set the tone in the first shift,” Brown coach Digit Murphy said. “We beat ourselves today.”

Though the Bears battled back for most of two periods, junior winger Lauren McAuliffe scored a shorthanded beauty late in the second period to begin a spree of five unanswered goals that shut the door on the Bears.

Botterill was an offensive force in the first period, assisting on Catlin’s opening-shift goal and then scoring two of her own on terrific individual efforts.

“[Botterill’s] head is always up,” Brown co-captain defender Cassie Turner said. “She sees everything on the ice. She’s so sneaky, even if you stick someone to her she still gets free.”

After Brown co-captain Kim Insalaco brought the Bears back into the game, scoring from the point to cut the lead to 3-1 at 15:32 of the first, Botterill played rally-killer, scoring on a weak shot with only four seconds remaining in the period.

The 2002 Olympic gold medalist tacked on another goal and assist in the final frame.

Though Brown’s Katie Guay cut the lead to 4-2 less than two minutes into the second period, scoring off an Insalaco rebound, Harvard responded six minutes later, as Ashley Banfield banged home a Catlin rebound on the power play.

Keaton Zucker scored on a breakaway midway through the period to keep Brown within two goals, and the Bears remained competitive until McAuliffe’s shorthanded goal at 16:24 of the second period shifted the tide for good.

With captain Jamie Hagerman in the penalty box late in the second period, junior defender and captain Angela Ruggiero took the puck at center ice, blew by a defender and sent a perfect pass to the onrushing McAuliffe left of the goal. McAuliffe finished the play, roofing it over helpless Brown goaltender Pam Dreyer.

“Any time a team is on the power play they don’t go as hard in their own end,” Ruggiero said. “We tried to take advantage of that with really hard forechecking. I think we did that today.”

McAuliffe’s goal put Harvard ahead 6-3 at the end of the second period and Ruggiero made it 7-3 on a power-play opportunity 31 seconds into the third, scoring on a wicked wrist shot. The Crimson scored three more goals to finish the onslaught.

“The shorthanded goal really broke our back,” Murphy said. “We really felt we were in it until that point.”

McAuliffe is no stranger to scoring crucial goals. Last season, she netted the overtime game-winner against heavily favored Northeastern in the Beanpot semifinals.

After McAuliffe’s goals, Harvard turned a decisive victory into complete destruction, outshooting Brown 20-7 in the third period. For the game, the Crimson was 3-for-6 on the power play, making the most of its opportunities.

“We buried our chances,” Harvard coach Katey Stone said. “We played real good D. We handled their flyer pretty well. We were moving off the puck tremendously well.”

Crimson junior goalie Jessica Ruddock had a strong game, coming up with a big save late in the first period. With Harvard leading 3-1, Ruddock robbed Guay on a breakaway. The Crimson netminder went down into the splits to make a beautiful stop off her blocker.