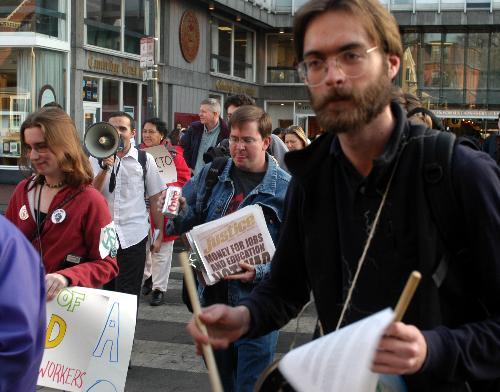 Over 50 protestors—including members of the Progressive Student Labor Movement (PSLM) and various Harvard unions—joined a St. Patrick’s Day “Walk of Shame” through the Yard to draw attention to their grievances yesterday.

Brandishing noisemakers and beating drums, the protesters marched around campus and recited testimonials regarding labor disputes through a megaphone to an enthusiastic crowd. They chanted slogans like “Labor management Harvard-style is exploitation with a smile!” and “Two can’t do the work of four, Harvard you must hire more!”

Their procession took them from the front of the Holyoke Center to Lehman Hall, Widener Library, Lamont Library and Loeb House. Along the way, they held up traffic on Mass. Ave., discussing their cause with passers-by.

The protesters accused Harvard of failing to live up to its promises following the conclusion of PSLM’s occupation of Mass. Hall two years ago. At the march’s various stopping points, workers approached the megaphone to plead their cases.

The subcontracting of work to non-union members, worker harassment, discrimination, layoffs and lack of full-time jobs were the most prominent issues presented by the protesters.

PSLM member Daniel B. Weissman ’05 said the march was not held in response to any one major University action but rather was a reaction to a number of smaller labor issues.

“These things just pile up one after another,” he said. “At some point, you have to say enough is enough.”

Marilyn D. Touborg, director of communications for Harvard’s Office of Human Resources, declined to comment on specific grievances, saying that the University preferred not to resolve labor issues publicly.

But Professor of Economics Lawrence F. Katz, who chaired the Harvard Committee on Employment and Contracting Policy convened following the Mass. Hall sit-in, said the University has made substantial progress in relations with custodians, dining hall workers and security workers—groups his committee covered.

“In terms of wages, benefits and contracting, there have been large improvements in the last year,” he said. “There have been very large [wage] increases, much larger than any national trend.”

But Aaron Bartley, a union organizer for SEIU Local 254, said the University has not followed through on its promise to create more full-time custodial jobs.

“Harvard has broken a clear promise and contractual obligation,” he said.

Touborg said the University is in compliance with its contract and is trying to create more full-time positions.

“The University remains committed to converting part-time positions to full-time positions on an attrition basis in accordance with the terms of the collective bargaining agreement,” she wrote in an e-mail. “Harvard will strive to achieve that goal during the life of that contract.”

Multiple speakers accused the University of being greedy—saying it is sitting on a “pot of gold”—and alleged it has an anti-union agenda. HUCTW representative Geoff Carens mentioned an alleged human resources planning document that he said encourages harassment of employees with the goal of eliminating their jobs.

“It seems to me the long-term plan is clear—drive out the unions,” said HUCTW member Randy Fenstermacher. “Then bring in the low-wage workers.”

Fenstermacher, a Harvard College Library worker, himself generated a joint protest by HUCTW and PSLM earlier this month when Harvard denied his request to have union representation at a regular performance review.

Edward Childs, a representative from HERE Local 26—which represents dining hall workers—said the University informed him last Wednesday that there would be 50 fewer summer jobs available to dining hall employees this year.

Due to decreased food service demands during the summer, other departments at Harvard have historically taken on dining hall workers, Childs said, but those opportunities have been scaled back—an action which he said runs contrary to HERE’s contract agreement.

“It violated the crux of the agreement that we had—they said they would look into the summer situation,” he said, calling University President Lawrence H. Summers “a liar.”

He also said that 10 more union workers would not be able to obtain summer employment in non-union workplaces that had previously been open to them.

“We can’t get these jobs because we cause trouble,” Childs said. “Well, we intend to cause a lot more trouble.”

But Touborg said applications of dining service employees for summer employment had been submitted to other Harvard departments. They will be notified of their summer status in mid-April, she said.

Katz said the University had been making a good-faith effort to improve labor relations.

“We know the University has invested in improving supervisor training, has hired a University ombudsperson, and has hired people with multi-lingual skills,” he said, adding “it’s probably too early to tell” if such measures will cure all the University’s labor woes.

He said the merits of individual grievances are hard to assess, though labor conditions on the whole have improved substantially—due in large part to University cooperation.

“The rhetoric of all these workers earning below the living wage doesn’t seem to fit the reality,” he said. “The University has taken steps to try to make it easier for people to raise these issues.”